Hello, fight fans, and welcome to this week’s edition of the Monday MMA Round-Up, where we look back at the week that was and look ahead to the week that is in the world of mixed martial arts. It was a crazy busy week, capped off by a notable UFC 274 event, so let’s dive right in to all that’s going on.

Looking Back at UFC 274, Bellator, PFL

Here are the fights I would make next for those who fought at UFC 274 on Saturday:

Here are the notable MMA events taking place this week: 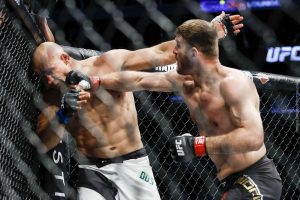 In the main event, UFC Heavyweight Champion Stipe Miocic scored a first-round knockout of Junior Dos Santos to retain the championship. It was a rematch of a fight that took place in December 2014, which was won by Dos Santos in a close fight. This wasn’t nearly as close as Miocic needed just over two minutes to dispose of Dos Santos.

In the co-main event, UFC Women’s Strawweight Champion Joanna Jedrzejczyk continued her dominance, at the time, of the division, scoring a unanimous decision win over Jessica Andrade. Also on the main card, Demian Maia won a split decision over Jorge Masvidal, Frankie Edgar scored a finish at the end of the second round over Yair Rodriguez, and David Branch won a split decision over Krzysztof Jotko. The prelim headliner was a no contest between Eddie Alvarez and Dustin Poirier, while Jason Knight, Chase Sherman, James Vick, Cortney Casey and Enrique Barzola scored wins on the prelims.

You can watch UFC 211 on UFC Fight Pass here.

This week on In The Clinch, myself and Paul Fontaine will go over more of the fallout of UFC 274. We’ll also look back at Bellator 280 and PFL, look ahead to UFC on ESPN 36 and take a look at all of the big fight announcements of the past week. You can listen to In The Clinch on The Fight Game Media Network of podcasts, which are available FREE on Apple Podcasts and Spotify.

We also have a special post-UFC 274 wrap-up show available exclusively on our Patreon page, so check it out and thank you for the support!