Hello, fight fans, and welcome to this week’s edition of the Monday MMA Round-Up, where we look back at the week that was and look ahead to the week that is in the world of mixed martial arts. UFC and Bellator both held events this week, so let’s dive right in to all of the action going on.

Here are the fights I would make next for those who fought at UFC on ESPN 36 on Saturday:

Here are some of the major MMA events taking place this upcoming week: 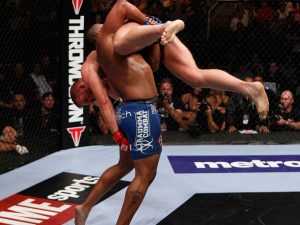 On May 19, 2012, Strikeforce wrapped up their Strikeforce Heavyweight Grand Prix at the HP Pavilion in San Jose, California, a year-long tournament to crown the best heavyweight under the Strikeforce banner. It ended up being won by someone who wasn’t even scheduled to be in the tournament, who went on to have a Hall Of Fame career.

In the finals, Daniel Cormier scored a unanimous decision over Josh Barnett to win the Strikeforce Heavyweight Grand Prix Championship. Cormier was originally an alternate, but replaced Alistair Overeem after Overeem was pulled from the tournament, and he knocked out Antonio Silva in the semi-finals. Barnett made it to the finals on the heels of wins over Brett Rogers and Sergei Kharitonov. Cormier would go on to become a two-division UFC champion and was recently announced as a 2022 inductee for the UFC Hall Of Fame.

You can watch Strikeforce: Barnett vs. Cormier on UFC Fight Pass here.

This week on In The Clinch, myself and Paul Fontaine will look back at UFC on ESPN 36, Bellator 281 and episode two of The Ultimate Fighter. We will also look ahead to UFC on ESPN+ 64, Eagle FC 47, take a look at all of the news and fight announcements and much more. In The Clinch is part of The Fight Game Media Network of podcasts, which are available FREE on Apple Podcasts, Spotify and also on our Patreon page.