Chris Charlton’s 2015 book Lion’s Pride: The Turbulent History of New Japan Pro Wrestling has become the ultimate go-to English-language resource when it comes to New Japan Pro Wrestling. His comprehensive account of NJPW’s history has allowed Western fans to grasp much more of the company’s nuance, sensibilities, and historical significance than ever before, which is important because much of Japanese pro wrestling is defined by its sensibilities and specific attachments to tradition and lineage. 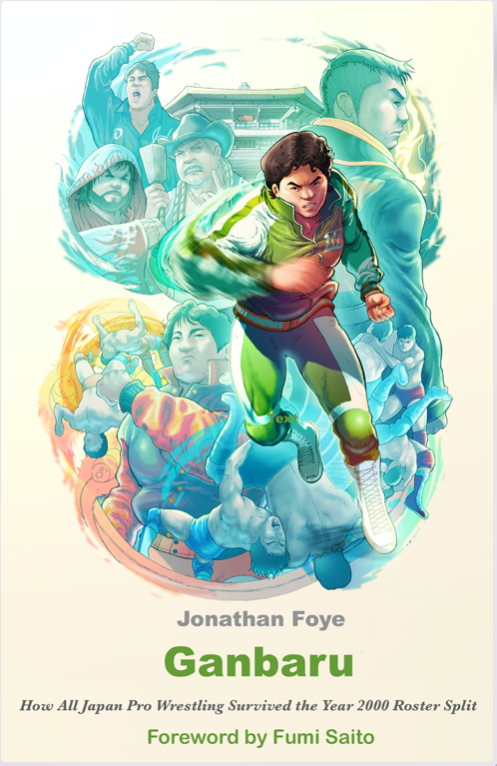 I bring up Charlton’s book because when it comes to puroresu, it’s the standard in quality and reliability, and in 2022, it’s become regular within hardcore wrestling fan circles to hear murmurs of how “someone should do an All Japan book.” And I can say with confidence that Dr. Jonathan Foye has filled that void for the moment with Ganbaru: How All Japan Pro Wrestling Survived the Year 2000 Roster Split.

While Dr. Foye is explicit in explaining to the reader that this account is meant to focus AJPW spitting apart after the death of promoter Shohei “Giant” Baba, in the end, it turned out to be the de facto “History of AJPW” book. If you’re not at all familiar with the company or its history, the early chapters of this book give a thorough account of how AJPW came to be, who the important players were at the time, and which titles and tournaments Baba introduced that are still part of the most recent iteration of the company. The meat of this short but dense book fo

Additionally, Fumi Saito provided an introduction to Dr. Foye’s book, but he’s also quoted at length throughout and provided a unique insider-perspective on the happenings backstage in AJPW at the time, or a time where the backstage area was more guarded from the public than in the past.

If you’ve been subconsciously waiting for a Chris Charlton-level AJPW history book, I think Ganbaru really does fill the gap. I mentioned the book length earlier, and while it’s short, it’s not short on content. And if you’re a regular listener to Write That Down! With Fumi Saito and myself, you’ll also be quite familiar with much of the content within, as Saito and I have spent hours on the show discussing the same topics. I assure you, fans of AJPW: This is the real deal.

Ganbaru: How All Japan Pro Wrestling Survived the Year 2000 Roster Split is available on Amazon now.