Coming off a very successful pay-per-view on Sunday night, the follow-up show to Revolution did a record low viewership for Dynamite on TBS. That’s the bad news. The good news is that the show topped all of cable television in the key demo and was way up from the previous week.

Still, the show continues to benefit from the strong lead-in provided by The Big Bang Theory, as evidenced by these quarter hour breakdowns as reported by Brandon Thurston of wrestlenomics.com. Not a single quarter hour of the show hit the show average in total viewers with the exception of the opening one. 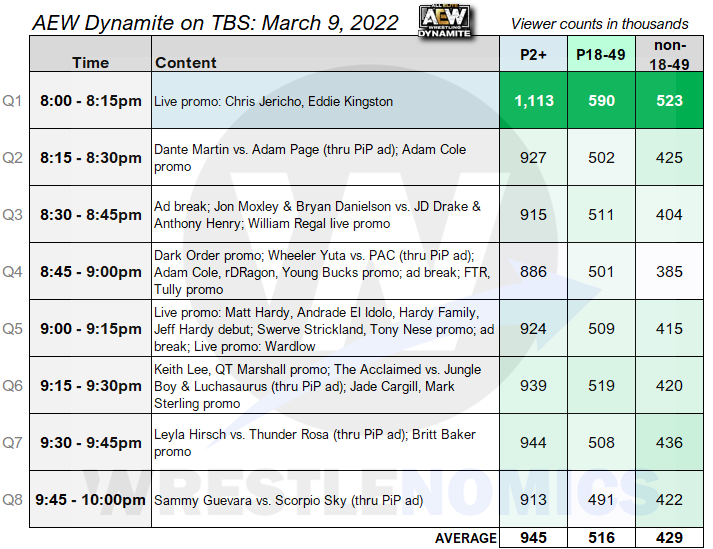 AEW Dynamite was up 27.2% in overall viewers and 25% in the 18–49 demo. They were the only show this week to have increases in both categories year over year.

WWE NXT 2.0 was down 11.3% in viewers and 27.8% in 18–49. That’s especially bad considering it’s being compared to when the show still was running head-to-head with AEW on Wednesdays.

WWE RAW was down 6.4% in viewers and 18.2% in 18–49. It’s the twenty-second straight week of year-over-year declines in the demo. The average decline over that time span has been 20%. That’s almost half a year. With TV as a whole declining about 8%, this is very bad.

WWE SmackDown was up 0.4% in overall viewers but down 1.7% in 18–49. That’s very good with TV on the whole declining about eight percent and essentially even with last year.

Last month I showed the averages for January as compared to the same month in 2021. This month I’ll do the same for February and this will catch things up.

AEW Dynamite had huge gains but had the advantage of a new, stronger network as well as not having NXT as direct competition. SmackDown being up is a good sign for that show in terms of getting a television rights increase on their next deal.