It’s harder and harder for wrestlers to create genuine heat these days. Heel characters have run through nearly every possible way to get people to hate them whether that be constant cheating, running down a local sports team or calling fans vulgar names. These tropes can get tiring over time and can come off as uninspired, especially when they are overused in WWE and AEW. MJF, while being one of the most polarizing figures in the business, has seemingly found a way around these tropes.

When MJF used his signature ‘Diamond Dynamite Ring’ to beat CM Punk on the February 2nd edition of Dynamite, I believe that solidified and ‘got over’ the prop as a genuinely smart and believable way for the ‘Salt Of The Earth’ to consistently win matches without resorting to having pointless ref bumps, distractions from outside entities, or other ways that can sometimes cause fans to roll their eyes.

I wasn’t sold on the idea of the ring until the Punk match ended the way it did. Previously, it was always too obviously given to him by either Wardlow or Shawn Spears in plain daylight. When it happened in the Punk match, I didn’t notice it until after the pin fall was counted which made it so great. It should always be something that goes unnoticed until replays happen after the match. That way there is always the immediate shock factor that hits the audience as soon as the pin fall is made. MJF has won quite a few matches with his ring and I hope it continues to be such an important factor in anything he does that relates to ‘in the ring’ stuff. 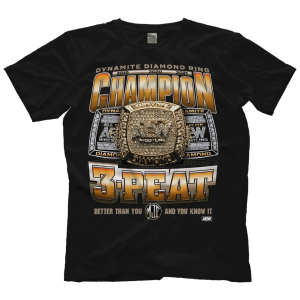 A bonus that comes from this situation is that MJF gets to win the ‘Diamond Dozen’ Battle Royale every single year. That stat can be ‘padded’ easily as the years pass by. If a casual fan was to hear that MJF is a six-time Diamond Dynamite Ring winner in a few years, I feel like that would come off almost as well as saying someone is a six-time champion. Overall, it’s really satisfying to see that MJF is thriving as a heel character without relying on the same thing that other ‘bad guys’ in wrestling rely on these days.

And I mean, c’mon… the marketing opportunities that come from this are endless.