AEW Dynamite matches the lowest 18-49 number since April 2021; RAW was up in second week on SyFy.

AEW Dynamite did not have as strong of a lead-in from Big Bang Theory as it does most weeks on TBS and as a result, the show did its lowest viewership in over two months and its lowest rating on a Wednesday night in the key demo since April 7, which was the final week of the Wednesday Night War with NXT.

The show had a much lower opening quarter than usual and declined steadily throughout, as shown in data originally reported by Brandon Thurston of Wrestlenomics.com. 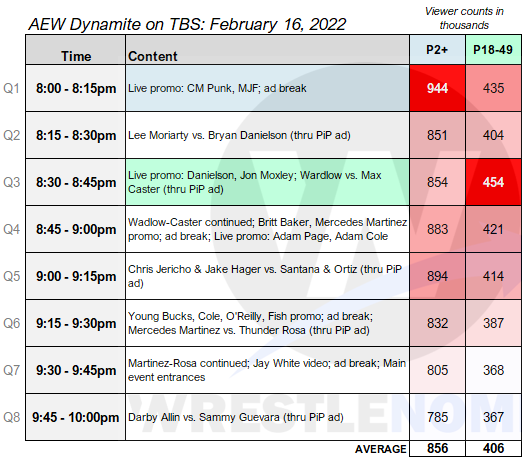 AEW Dynamite was up 16.3% in overall viewers and was even in the 18–49 demo. It’s the seventh straight week that the show has had double digit year over year increases in total viewers.  They were also the only one of the four major shows to not have a decline in either category this week.

WWE NXT 2.0 was down 26.4% in viewers and 31.3% in 18–49.  That’s especially bad if it’s being compared to when the show still was running head to head with AEW on Wednesdays, but they do have the SyFy excuse this week. It’s notable that the 18–49 decrease, as well as the 18-49 increase for Dynamite, are the exact same as two of the last weeks, one of which had no Olympics.

WWE RAW was down 11.5% in viewers and 22.8% in 18–49. It’s the nineteenth straight week of year over year declines in the demo. The average decline over that time span has been 20%. That’s almost a third of the year. With TV as a whole declining about 8%, this is very bad.

WWE SmackDown was up 12.1% in overall viewers but down 3.5% in 18–49. That’s very good with TV on the whole declining about eight percent.

After catching up on monthly data for the end of 2021 over the last few weeks, this week I’ll compare the quarterly data for Q4 (October-December) 2021 for all four shows and how they did compared to 2020. It’s a longer term trend that is less susceptible to variables. Next week it will be the year end data for 2021.

AEW Dynamite was the only show to have increases in either category for the quarter but WWE’s drops were not as severe when they’re balanced out over the quarter as they seem to be week to week.