Hello, fight fans, and welcome to this week’s edition of the Monday MMA Round-Up, your destination for all of the news and notes from the past week in the world of mixed martial arts. It was a busy one as the UFC returned to action and there was tons of news, so let’s dive right in.

Here are some fights I would make next for those who fought at UFC On ESPN 32 next:

Coming up this week

Here are some of the notable MMA events taking place this week: 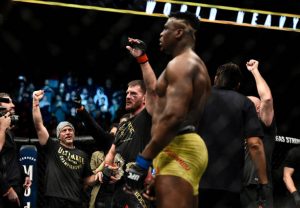 In honor of a major UFC Heavyweight Championship bout taking place this upcoming weekend, we flash back to another pay-per-view headlined by a major heavyweight title bout as we look back at January 20, 2018. UFC 220 took place on that date from the TD Garden in Boston, Massachusetts, with 16,015 fans in attendance. It had a gate of $2.45 million and an estimated 350,000 buys on pay-per-view.

The main event featured UFC Heavyweight Champion Stipe Miocic defending the title against rising prospect Francis Ngannou, who was coming off a vicious knockout of Alistair Overeem. Miocic would end up dominating the fight with his wrestling on his way to scoring a unanimous decision to keep the title. Ngannou would avenge the loss just over three years later by knocking out Miocic to win the title at UFC 260 in March 2021, and he remains the champion headed into his first official title defense this upcoming weekend.

In the co-main event, UFC Light Heavyweight Champion Daniel Cormier scored a second-round TKO of Volkan Oezdemir to retain the title. Also on the main card, Calvin Kattar finished Shane Burgos in the third round, Gian Villante scored a decision over Francimar Barroso, and Rob Font scored a second-round knockout of Thomas Almeida. Among those who scored wins in the prelims included Abdul Razak Alhassan, Dustin Ortiz, Julio Arce and Islam Makhachev.

You can watch UFC 220 on UFC Fight Pass here.

This week on In The Clinch, myself and Paul Fontaine will look back at UFC On ESPN 32, look ahead to UFC 270, take a look at all of the crazy news that came about over the past week and much more. In The Clinch is part of The Fight Game Media Network, with all of our podcasts plus many others available on Apple Podcasts, Spotify, Google Podcasts, and our Patreon page. We will also have an exclusive UFC 270 post-fight edition of the show available on the Patreon following UFC 270.