The big news: AEW Dynamite increases in overall viewers but falls to lowest 18–49 number since May

AEW’s special edition of Dynamite, the second annual Winter is Coming, increased its overall viewership to the highest level in about a month but tied it’s lowest mark in the 18–49 demo since well before the return to live touring. The likely culprits were season finales of several shows celebrating their season finales, including The Challenge and Real Housewives on cable and network offerings Masked Singer and Survivor.

AEW Dynamite was up 17.6% in overall viewers but down 3.1% in the 18–49 demo. This is the third straight week of year over year decline in the key demo after months of double digit increases. This is mostly due to the fact that the show airs live on the west coast now but off-setting that is the fact the show no longer has NXT as direct competition on Wednesday nights. Overall viewers being up is evidence of how much that helps Dynamite.

WWE NXT 2.0 was down 26.8% in viewers and 26.3% in 18–49. This is being compared to when they were running on Wednesdays opposite Dynamite so it’s even worse than it seems on the surface. The 18-49 drop is, quite frankly, shocking. And it’s not a one week aberration as the show has declined year over year in eleven of the last twelve weeks and the average drop has been almost 18%.

WWE RAW was up 3.1% in viewers but down 4.9% in 18–49. It’s the tenth straight week of year over year declines in the demo after a good run of growth earlier in the year. The average decline over that time span has been 17% so almost the same as NXT.

WWE SmackDown was down 2.9% in overall audience and 16.7% in 18–49. This is seven straight weeks of decline, which has not happened since March.

Courtesy of Brandon Thurston at Wrestlenomics.com, below is a chart detailing the quarter hours for this week’s episode of AEW Dynamite on TNT.

What this clearly shows was heightened interest in the World title match that opened the show and spanned the first hour and then some. There was a massive drop-off after that but things picked up again for the main event. In fact, the largest growth segment was the main event, which featured MJF. He has been one of the most consistent ratings movers over the last several weeks, ever since starting his program with CM Punk. 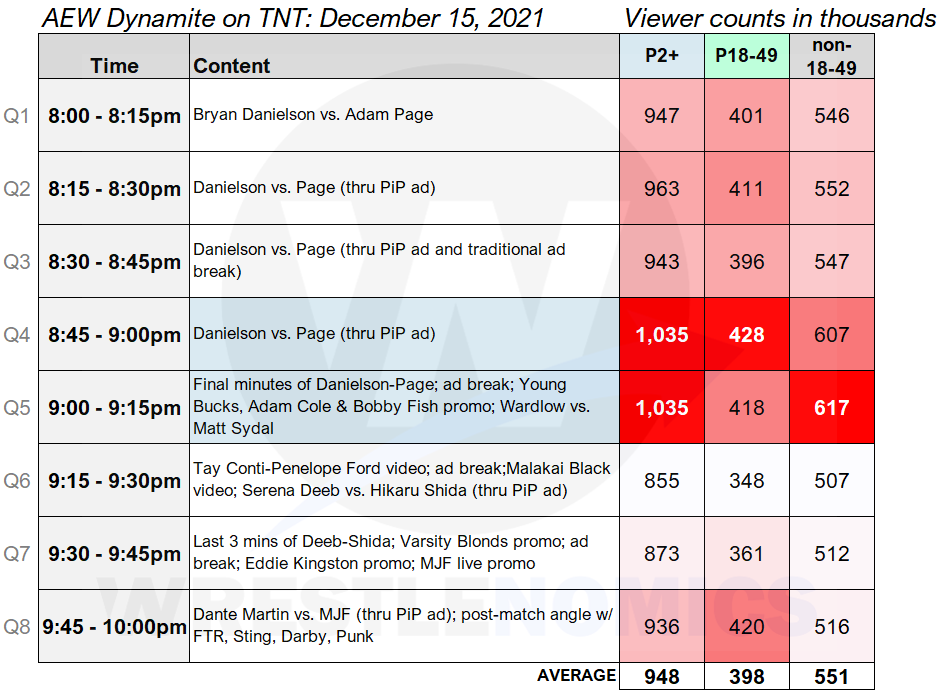