On most weekends there are only three shows from the majors, just four hours or so of wrestling to write about in this weekly piece. Four hours of wrestling is a manageable weekend. This was not one of those weekends. There was the usual SmackDown and Rampage on Friday night, and on Saturday night we had New Japan’s Strong, Best of Super Juniors Night 1 from Korakuen Hall, & Battle In The Valley from San Jose, as well as the All Elite Full Gear PPV. Sunday night we had night one of World Tag League.

I think we found out this weekend. I know that you don’t have to watch everything. But from just three companies over two nights, there were around 14–15 hours of high-level pro-wrestling. New Japan Strong was definitely skippable, there are parts of SmackDown where you can hit the fast forward, and I laid down for a power nap during the Minneapolis Street Fight but this was a tough weekend to keep up with everything.

On the subject of too much, a lot of the Full Gear matches felt long. The falls-count-anywhere Super-Kliq vs. Christian Cage and Jurassic Express match could’ve gone half the length it did. Other matches on the card could’ve had some minutes shaved off as well.

He’s my favorite of all time for a reason: CM Punk beat Eddie Kingston in one of the best matches in either guy’s All Elite career. At just eleven minutes it was the shortest match on the card, shorter than the lone buy-in bout, but it was by far the most efficient match on the show.

This match had a short build of about two weeks and change and they managed to make it feel like one of the biggest fights of the year, and a fight it was. It was just a full-tilt brawl, resembling what would’ve happened if there weren’t referees and officials holding them apart on their multiple incidents over the past couple of weeks. I was fairly convinced that Eddie Kingston would actually get the win here because a massive win is the one thing Kingston hasn’t yet achieved in AEW despite how popular he is. Punk’s new shorts are also the best piece of gear he’s used so far in AEW. He should stick with them long-term.

This question is just an excuse to talk about Hangman Adam Page winning the AEW World Championship. It’s been a nearly three-year odyssey for the Hanger, from claiming he would be the first World Champion at the AEW press conference in January of 2019, to finally defeating his ex-partner for the title at Full Gear. The Kenny Omega-Twitter-cover-picture-prophecy has been fulfilled. 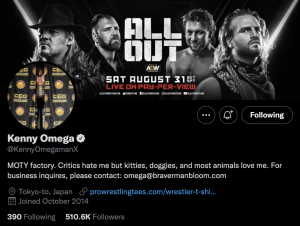 When Aubrey Edwards’ hand hit the mat for the three-count, it was one of the biggest pops in the history of the company. I put it up there with CM Punk’s debut which is by far the biggest. Page was over as hell before he left to be with his pregnant wife who gave birth to their son, and he came back weeks later just as over if not more. In a company with 21st-century wrestling royalty like Bryan Danielson and CM Punk, Page feels especially more beloved than any other All Elite wrestler. The fans love this cowboy doing cowboy shit, and although the week-to-week booking of his hasn’t exactly been perfect, he is the top babyface in the sport.

I think to truly make Adam Page a top super-duper-star of the 2020s and beyond, he has to hold this title for longer than anyone has so far. He needs to beat the biggest stars in this company. Yes, this is bold, but if they’re really all in on Hangman I think he’s the man to hand CM Punk and Bryan Danielson their first losses.

It’s still #RoundRobinTournamentSZN in New Japan with the Best of Super Juniors and World Tag League concurrently running as we close in on Wrestle Kingdom. As is expected in these tournaments that contain dozens and dozens of matches and upsets are as much certainty as is the sun setting in the west.

Eagles is coming off losing the IWGP Junior Heavyweight title to El Desperado, and being a recent champion makes me believe he’ll be very much figured into this tournament’s upper echelon. When I attempted to fill BOSJ brackets I had him beating Taguchi without a second thought.

These two Empire members feel like they’re on the opposite trajectory to Chase and Fale. The Will Ospreay-led unit has only been in existence for two years and still needs to establish itself. It’s only night one so everyone still has a chance, these tournaments are always unpredictable.