Hello, fight fans, and welcome to this week’s edition of the Monday MMA Round-Up, where we look back at the week that was and look ahead to the week that is in the world of mixed martial arts. The UFC ran a final event for the month of November before taking the holiday week off this week, so let’s dive right in to everything going on.

Looking Back at UFC on ESPN+ 56

Here are some fights I would make next for those who fought at UFC On ESPN+ 56 on Saturday:

Coming up this week 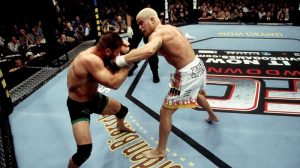 In what was dubbed as “the biggest fight in UFC history” at the time, the main event saw UFC Light Heavyweight Champion Tito Ortiz defend against his most-heated rival, Ken Shamrock, in what was Shamrock’s return to the UFC for the first time since he left in 1996, where he went on to have a successful wrestling career with WWE. Both men appeared on FOX Sports’ The Best Damn Sports Show Period to build up the fight, and it was unique at the time as the two spent lots of time trash talking each other to build up the fight. It was also the first fight to get mainstream attention from the likes of ESPN and USA Today, and many felt that UFC 40 was the turning point as to whether MMA would survive in North America, though it still took a couple of more years for interest to really sky rocket.

In what was an exciting fight, Ortiz would go on to defeat Shamrock after Shamrock’s corner stopped the fight following the third round, and Ortiz retained the championship. The two would go on to fight twice more during their careers, with both fights being won by Ortiz. Also on the card, Matt Hughes had a successful defense of the UFC Welterweight Championship as he defeated Gil Castillo, Chuck Liddell scored a first-round knockout of Renato ‘Babalu’ Sobral, Carlos Newton submitted Pete Spratt, and Robbie Lawler knocked out Tiki Ghosn.

You can watch UFC 40 on UFC Fight Pass here.

This week on In The Clinch, myself and Paul Fontaine will recap UFC On ESPN+ 56, talk about what we’re thankful for in the world of MMA in 2021, look at all of the news and everything going on. You can listen to In The Clinch on The Fight Game Media Network, which can be found on all of your major podcast platforms, including Apple Podcasts, Spotify and more, as well as our Patreon.