This week’s episode of WWE NXT 2.0 had the lowest audience since the move to Tuesday nights and, in fact, going back to February of this year. But the bigger news is that the show did a 0.11 rating, or the lowest in the two-plus year history of the show. The median age of the show this week was 62 years old, so all of the efforts to attract a younger audience seem to have the opposite effect, at least for this week. There was a stronger than usual NBA game this week. News was up, and there was also a soccer game that drew a big audience on Univision but things like this have happened before and they’ve never gone this low.

After eighteen months of competing with AEW Dynamite in the AEW vs. WWE ratings war, NXT 2.0 is so far behind that show, it’s almost inconceivable that they were ever even close to competitive.

AEW Dynamite was up 15.8% in overall viewers but had the exact same rating in the 18–49 demo. For Wednesday night airings, this is the first week since March 24 that the show hasn’t had a year over year increase in the key demo. However it’s the twentieth straight week the show has had an overall year over year audience grown on Wednesday and nineteenth straight double digit increase.

WWE NXT 2.0 was down 10% in viewers and 21.4% in 18–49. This is being compared to when they were running on Wednesdays opposite Dynamite so it’s even worse than it seems on the surface. The same can be said of the AEW show and look at the difference.

WWE RAW was down 11% in viewers and 17.7% in 18–49. It’s the sixth straight week of year over year declines in the demo after a good run of growth earlier in the year.

WWE SmackDown was down 5.8% in overall audience and 6.7% in 18–49. This is the first time Smackdown has had consecutive weeks of year over year declines since March.

Courtesy of Brandon Thurston at Wrestlenomics.com, below is a chart detailing the quarter hours for this week’s episode of AEW Dynamite on TNT.

The peak number in terms of audience was the top of the second hour, which is often the case, but it also coincided with the confrontation between MJF and CM Punk so that shouldn’t be surprising. The main event had the highest rating in the 18–49 demo, which is almost never the case. That indicates a lot of interest in that match.

The MJF/Punk segment also had the highest percentage of gain in terms of both audience and 18–49. The biggest losing segment was the one that immediately followed, which featured the tag match between the Acclaimed and Dante Martin and Lio Rush. 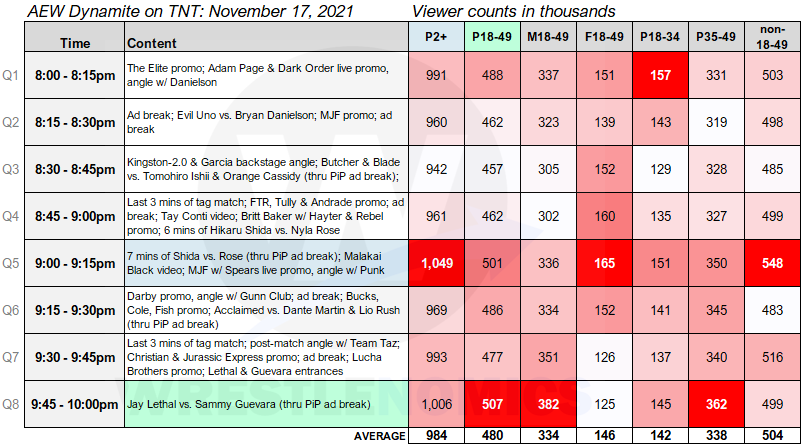