When the TBS Championship tournament was announced a few weeks back, there was a new sense of hope from fans that the women’s division would receive a new level of focus and attention. Once the 12-women bracket was released on Friday’s AEW Rampage, the future became a bit clearer about who might be the inaugural champion of TBS.

Let’s look at the tournament bracket and the matchups March Madness style. 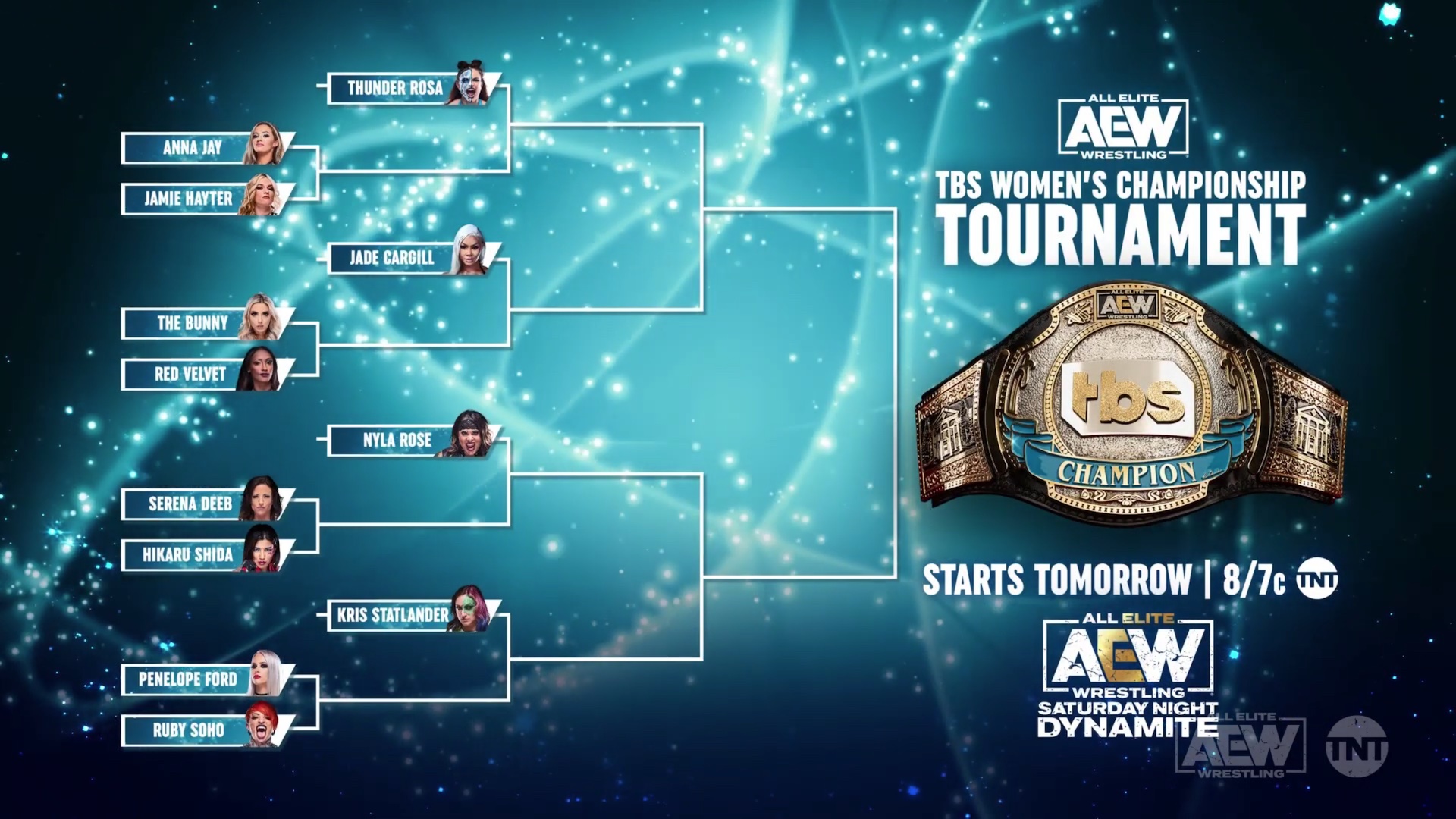 Note: Ruby Soho vs. Penelope Ford will be excluded from this Bracketology since the match has already taken place with Soho picking up the victory.

This is a first-time matchup. Jay and Hayter have only appeared in one bout together which was the 2021 edition of the Casino Battle Royale that took place at All Out. With Jay and Tay Conti’s current rivalry with AEW Women’s World Champion Britt Baker and her crew, this match will have personal stakes involved as well.

As of this writing, Jay has a singles record of 3-2 in 2021 while Jamie Hayter stands with a record of 2-1. The lack of matches for Jay is due to an injury that sidelined her from January-August, while Hayter only signed with AEW in August.

Due to the ongoing feud between TayJay and Britt Baker, I think Hayter will pick up the win with some interference from either Rebel or Baker.

First Round: The Bunny vs. Red Velvet

The Bunny and Red Velvet have met once in singles competition before, in a match that took place on the June 4th edition of Dynamite. Velvet was able to pick up the win. One week before that, Nyla Rose and The Bunny scored a tag team victory over Red Velvet and Big Swole, but neither Velvet or The Bunny were involved in the pin.

Red Velvet has a singles record of 17-4 in 2021, while The Bunny’s record is slightly less impressive at 8-7. All things considered, Red Velvet has a steep advantage over The Bunny headed into their first round matchup.

I predict an easy Velvet win.

Deeb and Shida are in the midst of an ongoing feud, which is great because it means the first round of the tournament will have a match with a storyline already built in. The two have only had one match together, which took place on the October 6th edition of Dynamite. Deeb picked up the win via submission.

Shida is on a quest for revenge after Deeb attacked her with her “50th win” award following that match. But, I don’t think that Shida’s quest is going to come to fruition here. I’d personally like it if the promotion told the story of Deeb being Shida’s Achilles heel.

I’ve previously written that Serena Deeb should be in the running to be the first TBS Champion and I’ll stick with that pick here.

Prediction: Serena Deeb advances
Thunder Rosa, Jade Cargill, Nyla Rose and Kris Statlander all received first round byes in the tournament given their status in the AEW rankings. Those four women will face the winners of the first round bouts, which are listed in order according to the bracket.

This is another fresh matchup here. Hayter and Rosa have only shared the ring once, but it was in a tag encounter in the London-based BEW promotion back in 2017.

This has all of the ingredients of a potential tournament-stealer match because of their different styles.

Rosa has had success in previous AEW tournaments, making it to the semi-finals of the Women’s World Championship Eliminator tournament earlier this year.

Rosa is winning there. It’s highly likely that Cargill/Rosa is one of the semi-final matches given their recent rivalry.

These two women have a bit of history dating back to Cargill’s first match with the promotion. Cargill is undefeated against Velvet in both singles action and tag team action, picking up one win each in the earlier months of 2021.

Although Velvet has more big time matches under her belt, Cargill is undefeated in AEW and I don’t think she has a chance of losing here. Cargill is treated as a big deal within the company and I think she at least makes it to the semi-finals.

Nyla Rose has been involved in both of the previous women’s tournaments in AEW thus far. In last summer’s Deadly Draw tag team tournament, Rose and partner Ariane Andrew were eliminated in the first round. In the 2021 Women’s Eliminator Tournament, Rose made it all the way to the finals before losing to Ryo Mizunami.

Deeb’s chances don’t look good here, especially given that Rose has 36 AEW matches under her belt this year, with 68.4% of those being wins. Deeb meanwhile only has ten matches spanning across two promotions, as she’s dealt with various injuries.

Although from a personal standpoint I’d like to pick Deeb, the numbers favor Rose heavily.

Neither of these women have competed for AEW for the entire duration of 2021 for various different reasons. Since coming back from an injury hiatus in April, Kris Statlander has only lost one out of 18 singles matches and that one loss came at the hands of champion Britt Baker.

Ruby Soho, who made her debut at All Out, is 4-1 in singles action in only seven weeks with the company. These are two women who simply don’t lose a lot of matches.

This is arguably one of the hardest matches of the tournament to pick so far, but my gut says that Ruby Soho is being primed for bigger things in the promotion than Kris Statlander is.

These two women have been at odds in recent weeks, especially after Cargill pinned Rosa in a three way match on a recent episode of Dynamite. But, Cargill used a chair to help her win that match.

As previously mentioned, Cargill is undefeated in singles competition but against inferior opponents. Out of her 15 singles wins, only three of those have come against opponents with winning records.

The longer that Rosa drags this bout out, the more it favors her. Cargill’s 15 singles bouts have only amounted to a total time of 34 minutes and 46 seconds.

Rosa is no doubt the toughest opponent that Cargill has faced yet, which is why I believe that the undefeated streak of “That B*tch” comes to an end here.

Due to her status as an AEW original, Rose has the most matches of any female in company history with 69 matches over nearly three years, which should give her an edge. But…

Rose has struggled in “big time” matches as of late. Since March, Rose is 1-4 in matches that are featured on Dynamite. I think Soho will pull off an upset to move on to the finals.

This tournament is mapped out in a way that could provide a plethora of exciting finals matchups, but I think Rosa vs. Soho is the end game here.

From an analytic standpoint, Rosa is the heavy favorite but I instead see her being the one to eventually dethrone Britt Baker in the coming months. Therefore, I think Ruby Soho will defeat Rosa and become the first ever TBS Champion.

Soho is a clear focus for the company’s future and she’s arguably one of the better in-ring wrestlers on the roster. If the TBS Title is going to be featured in a similar fashion to the TNT Title and have open challenges, I think Soho fits perfectly in that role given Rosa should undoubtedly be the next Women’s World Champion.