AEW Dynamite returned to Wednesday nights after being moved to Saturdays over the last two weeks. In the past when this has happened, the audience has bounced right back, but in this case, the show did its lowest viewership since July 7, the first night of the return to live touring. There were extenuating circumstances, however. The show went head to head with Game 2 of the World Series on FOX, which did nearly eleven million viewers.

The bigger factor may have been the fact that, for the first time, the show aired live on the West Coast as opposed to on a three hour delay and in prime time. This will be the case going forward until the show moves to TBS in January. It may be some time before the AEW vs. WWE ratings war sees another victory for the new kids on the block.

AEW Dynamite averaged 941,000 viewers, down 10.6% from the previous Wednesday night airing on October 6. It was well up from the 575,000 the show did this past Saturday, though. In the 18–49 demo, the show was actually up from 3 weeks ago. Dynamite finished fourth on the cable charts with a 0.40 rating, up 8.1% from October 6. Looking at the numbers a little more closely, the big drop was in persons over 50, where the show dropped 24.4% and that was also the best demo for the World Series game. So this number should come up next week unless the Series goes to a Game 7, which would air head to head once again.

WWE NXT 2.0 on the USA Network,  averaged 746,000 viewers, up 23.1% from last week for the Halloween Havoc special episode. In the 18–49 demo the show finished eleventh on the cable charts, after hovering around the number 30 mark most of the last month, with a 0.18 rating in 18–49. That’s up 28.6% from the previous week. These numbers may have been even higher except the show was up against Game One of the World Series. Real sports generally don’t affect NXT as much as Dynamite.

Monday Night RAW on the USA Network averaged 1,658,333 viewers for the October 25 episode. That’s up 4.1% from last week. In the 18–49 demo, the show averaged a 0.47 rating, up 20.5% from the previous week, which had set a series low in that category. They finished fifth on cable in the demo if you consider the combined audience of the Monday Night Football game on both ESPN feeds as one program Monday Night Football had one of the weaker marquee matchups of the season and there was no baseball competition on the night either. They also escape the World Series next week so it’s just football until early 2022.

Friday Night SmackDown on October 22  averaged 2.249 million viewers, up 4.8% from the previous FOX episode. The show was moved to FS 1 last week and had a supersized episode that partially went against AEW Rampage head to head.  The show finished in the top spot among the networks in the 18–49 demo with a 0.58 rating. That’s up 11.5% from two weeks before. SmackDown was up against game six of the AL Championship Series and also portions of two separate NBA games on ESPN.

AEW Rampage on the same night following SmackDown averaged 522,000 viewers, down 9.7% from last week. It was the  second lowest audience in the short history of the show. In the 18–49 demo the show  averaged a 0.22 rating which was also the second lowest for the show and down 8.3% from the previous week. Rampage finished ninth on the night in the cable charts, which was one spot higher than Dynamite would do the next night.

AEW Dynamite was up 20.5% in overall viewers and 25% in the 18–49 demo. For Wednesday night airings, it’s the seventeenth straight week the show has had double digit growth with all but one of those weeks being over 20%

WWE NXT was down 14.8% in viewers and 28% in 18–49. This is being compared to when they were running on Wednesdays opposite Dynamite so it’s even worse than it seems on the surface. The same can be said of the AEW show and look at the difference.

SmackDown aired on FS 1 this week last year so this comparison is not fair but it was up 155.3% in viewers and 132% in the demo.

Not much for this week so I thought it would be interesting to look at the quarter hour numbers for this week’s NXT. What I found most interesting about these is that Q3, featuring Raquel Gonzalez vs. Mandy Rose, showed the greatest growth. This is a segment that generally is one of the lower rated on the show and in this case it was, by far, the highest viewed.

The show opened strong and peaked with that match but then tailed off for most of the second hour with a slight increase for the main event, which is another slightly good sign. Raquel Gonzalez has generally moved numbers in a positive manner for the last eighteen months or so. 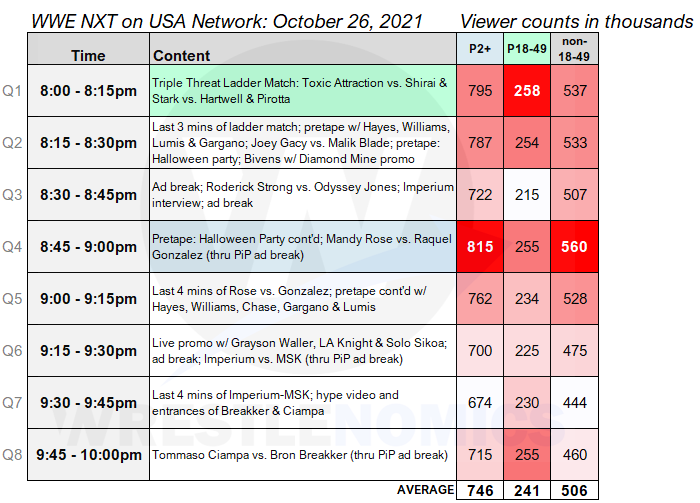