Hello, fight fans, and welcome to this week’s edition of the Monday MMA Round-Up, where we look back at the week that was and look ahead to the week that is in the world of mixed martial arts. It was a little bit of a newsworthy week this past week, and the UFC is gearing up for 2021 UFC International Fight Week in Las Vegas this week, so let’s dive right in to everything going on.

Looking Back at UFC, Bellator & Retirements

“I'm figuring this fighting thing out, and it feels really good.”

After submitting Ryan Spann in the first round, @LionheartASmith feels like he's coming into the best form of his career and believes he's close to challenging for the title again.

Here are some fights I would make next for those who fought at UFC On ESPN+ 50 on Saturday:

Here are the fight announcements that took place over the past week:

It’s 2021 UFC International Fight Week this week with a big UFC pay-per-view event highlighting the week. Here is what else that is on tap this week in the world of MMA: 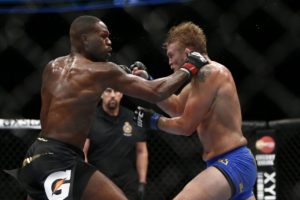 The main event was an all-time classic, and one of the toughest fights in the career of arguably the greatest fighter of all-time, as Jon Jones had a successful defense of the UFC Light Heavyweight Championship, edging challenger Alexander Gustafsson by decision. It was a back-and-forth fight that saw all rounds close, and even though Jones got the unanimous nod, Gustafsson was a game challenger. Jones has gone on record since talking about how he didn’t train much for that fight or take it serious, yet it became an instant classic. It’s also notable in that the fight will be inducted into the Fight Wing of the UFC Hall Of Fame this week during International Fight Week in Las Vegas.

In the co-main event, Renan Barao successfully defended the Interim UFC Bantamweight Championship as he finished Eddie Wineland in the second round with a spinning back kick followed by some punches. Also on the main card, Brendan Schaub scored a first-round submission of Matt Mitrione, Francis Carmont scored a decision over Costas Philippou, and future all-time great Khabib Nurmagomedov won a decision over Pat Healy. Among the winners on the prelims included Myles Jury, John Makdessi, Alex Caceres and Stephen Thompson.

You can watch UFC 165 on UFC Fight Pass here.

This week on In The Clinch, myself and Paul Fontaine will recap UFC On ESPN+ 50, look ahead to the big UFC 266 show this upcoming weekend, as well as reminisce on the storied careers of Joseph Benavidez and Carlos Condit. You can listen to In The Clinch on The Fight Game Media Network, with our Patreon page found here.