The big news: RAW takes back the demo lead

After two straight week of losing the demo battle to AEW Dynamite, WWE Monday Night RAW won the latest edition of the AEW vs. WWE ratings war by scoring a narrow victory in the 18–49 demo this week. By a slim margin of .49 to .48, or 642,000 to 627,000 viewers, RAW temporarily takes the title of “King of Cable.”

WWE NXT 2.0 on the USA Network, was down, but only slightly, after a strong debut week. The show averaged 746,000 viewers, down 3.1% from last week. In the 18–49 demo the show finished just outside the top 10 on the cable charts with a 0.20 rating in 18–49. That’s down 4.8% from the previous week. Like with Dynamite it was females, and particularly younger ones, that helped this number. In the 18–49 age group women were up 23.1% while men were down 17.2%. In 12–34, females were up 50% while males were down 15.4%. With the majority of the new debuts over the last couple of weeks being younger, good looking males in great shape it’s not hard to figure out why women might be more interested in the show.

Monday Night RAW on the USA Network averaged 1,792.635 viewers for the September 20 episode. That’s up 7.3% from last week but it was still virtually tied for the second lowest audience for the show since the return of live fans and. In the 18–49 demo, the show averaged a 0.49 rating, up 14% from the previous week. The show faced massive competition in the form of Monday Night Football on ESPN, NCIS on CBS, Dancing With the Stars on ABC and NBC’s The Voice. Those four shows combined to average over 35 million viewers and all aired opposite RAW. Knowing that the competition would be tough, and also not wanting to lose to Dynamite for the third week in a row, the company brought Roman Reigns over from SmackDown and had him wrestle twice on the show and it still just barely beat the AEW Wednesday night number.

Friday Night SmackDown on September 17  averaged 2.243 million viewers, down 5.9% from the previous week, which had tied the best number for the year. The show was second on television in the 18–49 demo with a 0.58 rating. That’s down 10.8% from the week before, which aired from their “home base” at Madison Square Garden.

AEW Rampage on the same night following SmackDown averaged 642,000 viewers, down 4.2% from last week. It was the lowest audience in the short history of the show for the third straight week. In the 18–49 demo the show did increase, averaging a 0.28 rating and finishing second on cable. That was a rise of 3.7% from September 10.

AEW Dynamite was up 50% in overall viewers and 52.5% in 18–49. Dynamite is now routinely up in double digits year over year compared to last year when they had NXT as direct competition on Wednesdays. But read that first sentence again, because it’s not a misprint. These kind of numbers are unheard of in modern television, cable or network.

WWE NXT was up 7.2% in viewers and 11.1% in 18–49. This is being compared to when they were running on Wednesdays opposite Dynamite. So the differences in the year over year increases directly speak to the popularity of both brands and how they’ve changed in the last year. When the move from Wednesday was made initially, I had estimated that it had a 10–15% increase for NXT as compared to around 20% for Dynamite at the time. The fact the year-over increase is that much more for Dynamite is the key fact. WWE NXT is doing “fine,” but Dynamite’s growth is astounding.

RAW was up 7.5% in viewers but down 2% in 18–49. It’s the tenth time in the last eleven weeks that RAW was not up year over year in viewers. It’s notable, though, that in the 18–49 demo RAW has now dropped year over year in four of the last five weeks. RAW also had college football and NFL preseason games to compete with during that time frame so that likely explains why the younger audience is more affected. RAW’s 18–49 number was the only decline in either demo number or viewership among the four major wrestling shows this week.

These kind of numbers are unheard of in modern television, cable or network.

SmackDown was up 5% in viewers and 16% in 18–49. For a network show to be increasing year over year, that really bucks the trend across all television and is very good for WWE.

Here are the quarter hours for this week’s Dynamite that featured an all time great television match in the opening 30+ minutes. The audience peaked at the end of that match and there was an immediate huge drop for the match between Brian Pillman Jr and MJF. It never got close to the peak level again and was pretty flat for the second hour. The chart is courtesy of Brandon Thurston at wrestlenomics.com: 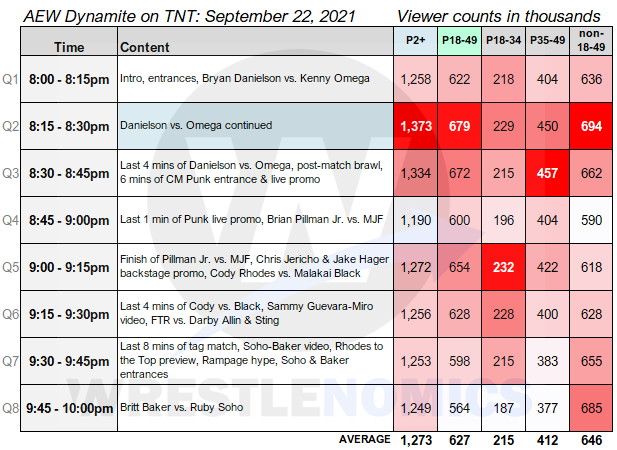