This week’s installment of the AEW vs. WWE ratings battle saw most of the shows down after seeing big numbers last week. Those, of course, featured CM Punk’s debuts on Rampage and Dynamite, as well as increased interest in WWE after SummerSlam. Meanwhile, WWE NXT’s ratings increased for the second week in a row with taped shows produced by Vince McMahon and Bruce Prichard.

AEW Dynamite averaged 1,047,000 viewers on TNT, down 10.7% from last week. They did, however, top the 18–49 cable charts with a 0.37 rating. Real Housewives had the same rating but slightly less viewers. The demo number was down 22.9% from last week’s huge number which had been the second highest in the history of the show. Female viewers led the decrease, as they were way down in both the 18–49 and 12–34 demo categories.

It’s interesting that NXT saw big increases in both those categories but it’s probably just a coincidence since they are on different nights. Dynamite also led all of cable with Men 18–49. Listed below are the quarter hour numbers including who appeared in each one, to show who was moving ratings on the show both positively and negatively.

This chart is courtesy of Brandon Thurston at wrestlenomics.com. The numbers are remarkably consistent with the biggest ratings gainer being Q2 which, not surprisingly, featured a CM Punk promo segment and appearances by Darby Allin and Sting. The biggest loser was the following quarter which had the MJF promo and a match between Orange Cassidy and Jack Evans (not Angelico as listed in the chart). But the biggest gainer was only 4.7% and many weeks there are segments that lose or gain in excess of 10%. The MFJ/Orange Cassidy segment only lost 2.8% 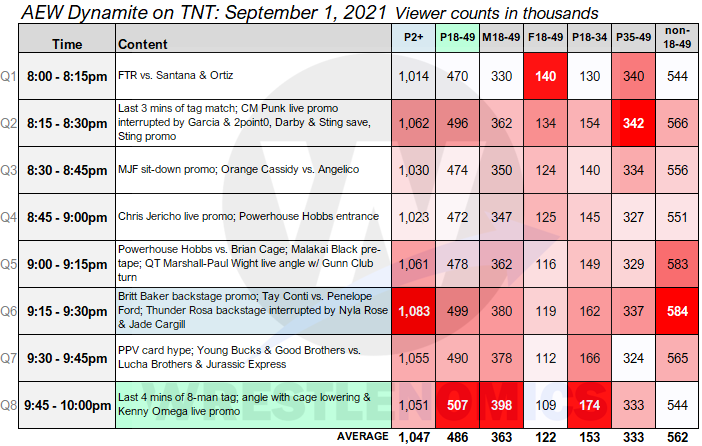 WWE NXT averaged 717.000 viewers on the USA Network, up 4.7% from the previous week. They were also up in the 18–49 demo, averaging a 0.17 rating. That’s a 6.3% increase from the August 24 show and placed NXT 23rd on the cable rankings, the second straight week they’ve risen on the charts. They are building toward a big show on September 14 with the storyline wedding of Dexter Lumis and Indi Hartwell and that show is also expected to kick off the new look for the brand as it transitions to being a pure developmental.

Monday Night RAW averaged 1,906,575 on the USA Network for the August 23 show. That was down 7.8% from last week’s show 2 nights after SummerSlam. The show finished in it’s usual spot atop the cable charts which will end when football season starts. RAW averaged a 0.55 rating, down 14.1% from the previous week, so it skewed much older this week.

WWE SmackDown on FOX averaged 2.25 million viewers on August 27. That’s up 7% from the August 20 show. Like the previous two weeks the show was pre-empted in a few major markets for NFL preseason football and the latter did big audience numbers. It likely cost SmackDown anywhere from 100,000-200,000 viewers overall. In the 18–49 demo, the show led all television with a 0.59 rating, up 3.5% from the previous week. This was also the first episode for the show after SummerSlam and had the advertised appearances of Becky Lynch and Brock Lesnar, the latter of which didn’t happen.

AEW Rampage on TNT averaged 722,000 viewers for the August 27 show, down 36% from the previous week, which featured CM Punk’s debut. They were down 45% in the 18-49 demo, averaging a 0.34 rating but that still topped the cable TV charts on the night.

AEW Dynamite was up 12.8% in overall viewers and 2.8% in 18–49. The really interesting thing here is that last year Dynamite had Wednesday night to itself after NXT moved to Tuesday nights for two weeks due to the NHL playoffs. This resulted in Dynamite doing some of it’s best numbers since the October 2019 debut and was an early sign of the increase the show would potentially have if NXT decided to do a permanent move. As we now know, that proved to be the same as Dynamite numbers are up about 20%, and that’s before the Punk return, while NXT had a much smaller increase raging from 5–10%. But recent looks at the year over year numbers have had Dynamite showing increases of 30% or more but those were being compared to nights where it aired in unfamiliar timeslots or with NXT as direct competition.

WWE NXT was down 15.6% in viewers and 36.6% in 18–49. It aired on Tuesday, as mentioned above, but it did not have Dynamite airing opposite it. So this is also a relatively fair comparison and shows how far in popularity the brand has dropped in the last year.

RAW was up 0.6% in viewers but down 5.2% in 18–49. It’s notable and somewhat historic that this was the eighth straight week that RAW has had a year over year increase. That’s the first time this has happened since 2009. Obviously the return to live fans is the major reason for this but it’s still been a very long time since this has happened.

SmackDown was up 4.9% in viewers but down 1.7% in 18–49. Those are good numbers for a network television show, but obviously slightly less than RAW. SmackDown saw a ratings boost of about 10% for the first few months after Roman Reigns’ return or the comparison would be more favourable for the 2021 numbers.

August 2021 is in the books so as I do every month, I present the August averages for all five shows and compare them to the numbers from August 2020 for all the shows with the exception of Rampage. This is the first full month with live fans for RAW, Smackdown and Dynamite so it will show the effects of having those fans back and how many extra viewers it helped draw.

In the same time frame, WWE NXT averaged 665,400 viewers. That’s down 12.7% from last year. The drop was even more severe with 18–49 viewers. The show averaged a 0.154 rating, down 26.7% from 2020. This is the only one of the four shows to show a year over year decrease and they are also the only show that’s not currently touring which is obviously the main reason.

I’d like to encourage all of you to check out a podcast that airs on the Fight Game Media Network Patreon. Parker Klyn and I are co-hosting The Dynamite Show, a quick recap of AEW Dynamite. Parker also does the written Dynamite coverage for both this site and F4W Online, and this podcast is a nice companion to his work. Parker will be leaving the show after this week’s episode with Jeff Hawkins filling his seat starting with next week’s show.