When Dynamite debuted two years ago, Monday Night RAW was averaging around a 0.8 in the 18–49 demo, which is the most important to advertisers. For its debut show, Dynamite averaged a 0.68 rating but eventually settled into numbers that were lucky to hit half of that. The numbers were steady and even increasing slightly until WWE NXT moved to Tuesday nights. At that point, they hit another level.

This week, things changed again. Following the debut of Adam Cole, Bryan Danielson, Ruby Soho and Minoru Suzuki at Sunday’s All Out pay-per-view, all four appeared on this week’s episode of Dynamite. It resulted in the show doing it’s second largest audience of all time. But in something not thought possible in this AEW vs. WWE ratings war, Dynamite actually beat RAW in the money demo.

Courtesy of Brandon Thurston of wrestlenomics.com, here are the quarter hour breakdowns for the show. The biggest gainer, by far, was the ELITE promo which featured the Dynamite debuts of Adam Cole and Bryan Danielson: 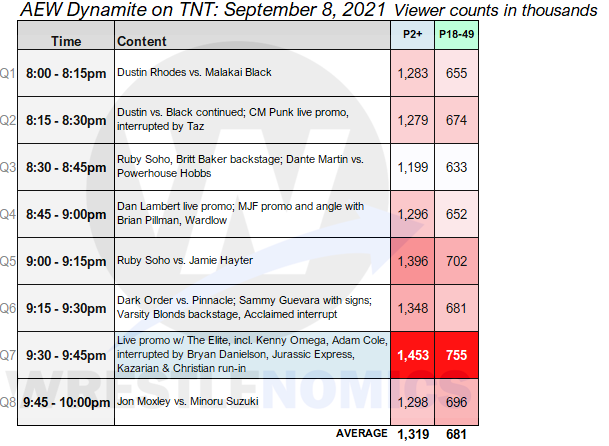 WWE NXT averaged 601.000 viewers on the USA Network, down 16.2% from the previous week. They were also down in the 18–49 demo, averaging a 0.14 rating. That’s a 17.6% increase from the August 31 show and placed NXT 31st on the cable rankings.. They are building towards a big show next week with Dexter Lumis and Indi Hartwell’s storyline wedding, and that show is also expected to kick off the new look for the brand as it transitions to being a pure developmental.

Monday Night RAW averaged 1,848,773 on the USA Network for the September 6 show. That was down 3% from the previous week. The show finished second on the cable charts with a 0.52 rating, trailing a college football game on ESPN. The 18-49 demo number was down 5.5% from the prior week.

WWE SmackDown on FOX averaged 2.22 million viewers on September 3. That’s down 1.3% from the August 27 show. This was the first week in a month with no pre-season NFL pre-emptions so the realistic drop was likely a little more.  In the 18–49 demo, the show led all television with a 0.62 rating, up 5.1% from the previous week.

AEW Rampage on TNT averaged 696,000 viewers for the September 3 show, down 3.6% from the previous week. This was the All Out go home show and it was the lowest viewership in the short history of the show. They were down 11.8% in the 18–49 demo, averaging a 0.30 rating but that still topped the cable television charts on the night.

AEW Dynamite was up 29.8% in overall viewers and 43.2% in 18–49. The really interesting thing here is that last year Dynamite had Wednesday night to itself after NXT moved to Tuesday nights for two weeks due to the NHL playoffs. In fact, this year last week, Dynamite did it’s highest audience in history (to that point in time) since the October 2019 debut, and this week was significantly higher than that. This shows just how much real growth there’s been in this company. And it’s not just a one week aberration as it’s the eleventh straight week the show has had double digit increases in year over year growth and the eighth week in that time frame that the increase has been at least 20%.

WWE NXT was down 28.3% in viewers and 36.4% in 18–49. It aired on Tuesday, as mentioned above, but it did not have Dynamite airing opposite it. So this is also a relatively fair comparison and shows how far in popularity the brand has dropped in the last year. With all other wrestling up year over year almost every week, this is very telling.

RAW was up 7.2% in viewers and 8.3% in 18–49. It’s notable and somewhat historic that this was the ninth straight week that RAW has had a year over year increase. That’s the first time this has happened since 2009. Obviously the return to live fans is the major reason for this but it’s still been a very long time since this has happened.

SmackDown was up 4.3% in viewers and 3.3% in 18–49. For a network show to be increasing year over year, that really bucks the trend across all television and is very good for WWE.