Monday Night RAW was down against the season premiere of NFL’s Monday Night Football, with its lowest audience and 18–49 demo number the show has ever done on in front of live fans. That combined with AEW’s recent momentum combined to see Dynamite beat RAW in the key demo for the second straight week. With next week’s loaded up show at Arthur Ashe Stadium and the following week having a marquee matchup on Monday Night Football, this could continue for a few more weeks.

As I stated in this column a couple of months back, the Wednesday Night Wars are over and the new AEW vs WWE ratings war is for the King of Cable. AEW Dynamite wins that title for the second week in a row.

AEW Dynamite averaged 1,175,000 viewers on TNT, down 10.9% from the previous week. Despite that rather large drop, it’s still the fourth highest audience in the history of the show. In the 18–49 demo, the show topped the cable charts with a 0.44 rating. That’s a 15.4% drop from last week and shows that the audience skewed a little older. In fact one of the only demos that didn’t drop was people over 50 where the show averaged the same 0.48 rating as last week.

WWE NXT on the USA Network, rebranded at “NXT 2.0,” was way up for a show featuring countless new character debuts, a four-way match for the vacant NXT title and the storyline wedding of Indi Hartwell and Dexter Lumis. The show averaged 770,000 viewers, up 28.1% from last week. In the 18–49 demo the show cracked the top 10 on the cable charts, which it hasn’t done in some time, with a 0.21 rating in 18–49. That’s up 50% from the previous week and the best number in the demo since April 27. The overall audience was the best since April 20 and the third best number the show has done so far in 2021.

Monday Night RAW on the USA Network averaged 1,670,000 viewers for the September 13 episode. That’s down 9.7% from last week and was the lowest audience for the show since the return of live fans and, in fact, was the lowest number the show has ever done in front of a live crowd. In the 18–49 demo, the show averaged a 0.43 rating, down 17.3% from the previous week. That’s also a record low for a show with a live crowd and the lowest number since the holiday weekend show on July 5.

Friday Night SmackDown on September 10 aired from Madison Square Garden and the numbers were way up for the return to their home base for the first time in two years and the television return of Brock Lesnar. The show averaged 2.383 million viewers, up 7.3% from the previous week and tied the best number for the year. The show also led all television in the 18–49 demo with a 0.65 rating, the highest in the demo since July 16, the first show with live fans.

AEW Rampage on the same night following SmackDown averaged 670,000 viewers, down 3.7% from last week. It’s the lowest audience in the short history of the show. In the 18–49 demo the show also had a series low with a 0.27 rating. That’s down 10% from the September 3rd episode.

AEW Dynamite was up 32.6% in overall viewers and 29.4% in 18–49. Dynamite is now routinely up in double digits year over year compared to last year when they had NXT as direct competition on Wednesdays. But the AEW increases are much more than NXT is doing on Tuesdays which shows just how much more popular they are a year later than NXT in the same time frame. And this week may be an aberration for the latter show with all the factors noted previously.

WWE NXT was up 11.8% in viewers and 16.7% in 18–49. It’s only the fourth time since May that they’ve been up year over year and most of those weeks compared to last year when they had competition.

RAW was down 1% in viewers and 14% in 18–49. It’s the first time in ten weeks that RAW was not up year over year in viewers. Monday Night Football had it’s best premiere since 2015 so that’s the reason. They were the only one of the four shows to not increase year over year.

SmackDown was up 2.3% in viewers and 8.3% in 18–49. For a network show to be increasing year over year, that really bucks the trend across all television and is very good for WWE.

As bad as the numbers were for RAW this week, it could’ve been much worse if they hadn’t essentially promised a cash-in and World title win for Money in the Bank holder Big E. He did, in fact, win the title in the final segment of the show and for one of the rare times in recent years, the third hour was the highest rated and viewed. Here are the quarter hour details and you can see that the big gainers were the World title match between Bobby Lashley and Randy Orton as well as the Charlotte Flair vs Shayna Baszler match earlier in the show. Chart is courtesy of Brandon Thurston at wrestlenomics.com: 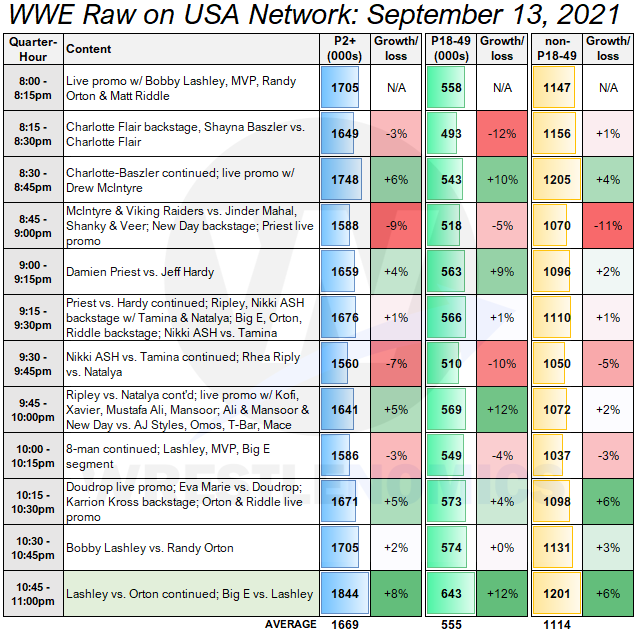