“El Terrible” Erik Morales was the epitome of a cerebral assassin. At 5’8, Morales dwarfed practically every one of his opponents at 122 pounds. Fighting from the outside with a lethal jab and bone crushing power in both hands, Morales had a style similar to the Nicaraguan legend Alexis Arguello. Until his final fight at 122 pounds in his epic first encounter with his greatest rival, Marco Antonio Barrera, Morales was almost invincible at 122 pounds. At 126 and 130 pounds, although not as dominating, Morales more than earned his ranking as the 33rd greatest fighter of the last 45 years.

After winning his first 26 bouts, 20 of which were by knockout, the 21-year-old Mexican prodigy earned the WBC number one ranking at 122 pounds and a shot at the three-time reigning champion and fellow countryman Daniel Zaragoza on September 6, 1997. As I wrote in my earlier article on Zaragoza, this was the ultimate crossroads fight between an up-and-coming fighter versus an older, wily great. The fight not only showcased all of Morales’ sublime offensive skills, but it also proved the superior guts, chin and stamina he possessed before finally knocking out the crafty Zaragoza in the 11th round. The 122-pound torch had officially been passed.

After his title victory over Zaragoza, Morales breezed through his first three defenses of his WBC title before defending his title on September 12, 1998 against two-time conqueror of fellow countryman and rival Marco Antonio Barrera, Junior Jones. Jones was the first fighter who Morales did not tower over as both stood at 5’8. Jones was one of my personal favorite fighters of all-time and I really thought that he had a legit chance of upsetting the red hot “El Terrible.” My father was a huge fan of Jones as well but reminded me that Jones, who reminded us so much of Thomas Hearns in his fighting style, had stamina and chin issues that would work against him against the steely chinned and tireless champion. The first three rounds saw Jones fight Morales to a standstill. On two occasions, Jones landed crushing right crosses that bounced off Morales’ chin and didn’t move or hurt the champion at all. Then in the fourth round, Jones, already visibly exhausted, engaged Morales in a firefight that resulted in Jones being dropped once and after getting up from the knockdown, battered unmercifully by Morales before referee Larry O’Connell stopped the fight with scant few seconds left in the fight. At 22, Morales had become scary great.

After another relatively easy three defenses, Morales faced the always tough, sturdy and energetic former bantamweight champion Wayne McCullough in October 22, 1999. The Irish challenger was a gritty brawler who also possessed a granite chin and endurance that rivaled the future Mexican icon. Morales fought a brilliant tactical fight by using his superior height and boxing skills to win a decisive unanimous decision. Morales’ next fight would be the greatest fight ever to occur between two Mexican fighters. 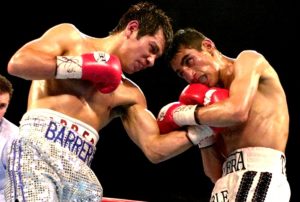 On February 19, 2000, Morales faced the aforementioned Barrera in a super bantamweight title unification fight as Barrera was the reigning WBO champion. I wrote extensively about this incredible fight in a previous article as it was, in my opinion, the eighth greatest fight in boxing history. Morales won a highly disputed split decision which saw him get visibly tired late in the fight before getting knocked down in the 12th round for the first time in his career. After nine successful defenses of his super bantamweight crown, Morales decided it was time to move up in weight to featherweight.

After winning his first three fights at 126, Morales secured a shot at WBC titleholder Guty Espadas, Jr. on February 17, 2001. Morales struggled in the first half of the fight before outfighting Espadas down the stretch of the fight to win a 12-round decision and his second world title. After a successful defense, Morales defended against Barrera in a highly anticipated rematch on June 22, 2002. This time, Morales didn’t exchange in toe-to-toe action. Instead, he wisely chose to box from the outside and control the action. Unfortunately, the judges once again erred in their scoring of the fight. Barrera won a decision that was as highly disputed as their first fight when Morales was given the decision. Barrera quickly vacated the WBC title he won from Morales and five months later Morales defeated Paulie Ayala to regain the WBC crown. Three fights later, Morales moved up to 130 pounds in search of his third weight division title.

On February 28, 2004, Morales defeated the rugged Jesus Chavez to win the WBC super featherweight title and his third weight division title. After a successful defense, Morales and Barrera engaged in their third and final fight of their iconic trilogy. In another scintillating contest, Barrera defeated Morales in the only fight of the trilogy I feel the judges got correct. Morales then agreed to fight the hottest fighter in boxing at the time; Manny Pacquiao.

On March 19, 2005, Morales faced Pacquiao in a fight many expected to be another destruction by Manny. Morales was considered an old 28-year-old fighter whose skills look to have declined due to his wars with Barrera. Instead of being food for Manny’s Tasmanian Devil style offense, Morales put on a textbook display of boxing from the outside countering Manny’s high octane offense. Morales went on to win a very decisive decision to win the biggest fight of his career. It would also be the final great night of his career.

Six months later, just nine days after his 29th birthday, Morales looked very slow and old against the slick boxer Zahir Raheem. Raheem completely dazzled and outslicked Morales to win an easy 12-round decision. Instead of hanging up, Morales fought two more fights with Pacquiao in 2006. In both fights Morales was obliterated by Manny’s speed and power, getting knocked out both times. At the age of 30, Morales was fighting like a man 10 years older.

Morales kept fighting and because of the WBC’s blatant bias towards Mexican fighters, Morales was gift wrapped the WBC 140-pound title when he defeated the less than stellar Pablo Cesar Cano. Finally, after being dealt two beatings at the hands of Danny Garcia in 2012, the now 36-year-old “El Terible” finally retired for good, finishing with an outstanding record of 52-9 with 36 knockouts. Morales would’ve landed much higher on my list if he hadn’t lost seven of his last eleven fights. Despite the amount of losses at the end of his career, it doesn’t dilute his greatness at 122 pounds and his wins over Pacquiao, Barrera, Zaragoza and Jones. It is why I consider him the 33rd greatest fighter of the last 45 years.