21-year-old University of Minnesota junior Gable Steveson cemented his place in US Olympic Wrestling history by defeating two-time World Champion Geno Petriashvili of Georgia for the Gold Medal at 125 kg. The match was a remarkably high-scoring affair for the heavyweight division. Steveson took the lead 1–0 after Petriashvili conceded the first point after being unable to score on the 30-second shot clock. Steveson scored with a high single-leg with a back trip finish, extending his lead to 3–0. After a Petriashvili shot, Steveson scrambled and forced a 1-point step-out, taking a 4–0 lead into the break.

In the second period, Steveson shot in, and Petriashvili countered with a crotch lift, exposing the American’s back to score 2 points. Steveson immediately reversed the position, scoring another point, but the score was narrowed to 5–2. With one minute left in the match, Petriashvili scored a takedown and followed up with two huge gut wrenches to take the lead 8–5.

With thirty seconds left in the match, Steveson’s heavy hands went to work. Possessing the best snap down in the world, Steveson forced Petriashvili to the mat and spun behind for the takedown with ten seconds left to narrow the score 8–7. Rather than trying to turn Petriashvili in par terre, Steveson stood straight up, asking for a restart. This was a unique move in Freestyle wrestling but something more common in Folkstyle. To Petriashvili’s surprise, the referee restarted than match. Once again, Steveson’s heavy hands snapped Petriashvili down, and with a misdirection step, the American hint the corner to secure the winning takedown with less than a second to go in the match.

Gable Steveson becomes the first American to win a Gold Medal at heavyweight since Bruce Baumgartner in 1992, eight years before he was born.

In the Bronze Medal at 74 kg, Kyle Dake met two-time World Champion Frank Chamizo of Italy. Many hoped this match-up would occur in the semis. Both men fell to eventual Silver Medalist Mahamedkhabib Kadzimahamedau of Belarus. With both Dake and Chamizo being counter wrestlers, the match-up was intriguing, as whoever could score first would hold an advantage, forcing the other to play catch-up. Early in the first, Dake attacked with double underhooks and cinched a body lock, forcing a 1-point step-out. Dake attacked a single-leg, and Chamizo forced a scramble but stepped out of bounds putting Dake up 2–0. Chamizo was put on the shot clock and attacked, but Dake countered with a lift and exposed Chamizo’s back for two more points, taking a 4–0 lead into the break. 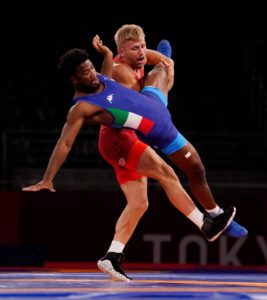 Chamizo never found his second gear in the ensuing period. After earning another step-out point, Dake locked up the win and earned the Bronze Medal.

Kyle Snyder, returning Gold Medalist at 97 kg, rattled off three wins over Jordan Steen (CAN), Abraham Conyedo (ITA), and Süleyman Karadeniz (TUR), earning his way into the championship round. In the finals, Snyder will meet the man many call the best wrestler in the world, Abdulrashid Sadulaev of Russia. Sadulaev won the Gold in 2016 at 86 kg. Since moving up in weight, Snyder and Sadulaev have wrestled twice, splitting matches. The two haven’t wrestled each other since 2018.

On the unofficial team scores, the US leads the Russian Olympic Committee. Tonight’s finals should cement which country reigns as the greatest Freestyle country in the World.

After dropping her semifinal match 10–7 to Sun Yanan of China, Sarah Hildrebrand will wrestle for the Bronze at 50 kg.

The winner of Sadulaev vs. Snyder will clinch the team race for their country.

With Snyder’s win, every member of the team will leave Tokyo with a medal. Thomas Gilman (Bronze 57 kg), Dake (Bronze 74 kg), David Taylor (Gold 86 kg), Steveson (Gold 125 kg), and Snyder will leave with at least the Silver. The US did not have a representative at 65 kg, with Olympic Trails Champion Jordan Oliver failing to qualify the weight