Historically, only top stars win this tournament, and odds are they win the Princess of Princess championship, TJPW’s top title. As such, the Tokyo Princess Cup is must-see viewing for joshi fans. Additionally, because every single wrestler on the roster participates, except Sakazaki this year, who you can see on AEW programming anyway, it’s the perfect introduction for somebody interested in giving TJPW a shot.

Here are my tiers for this year’s Princess Cup participants based on their likelihood of winning. 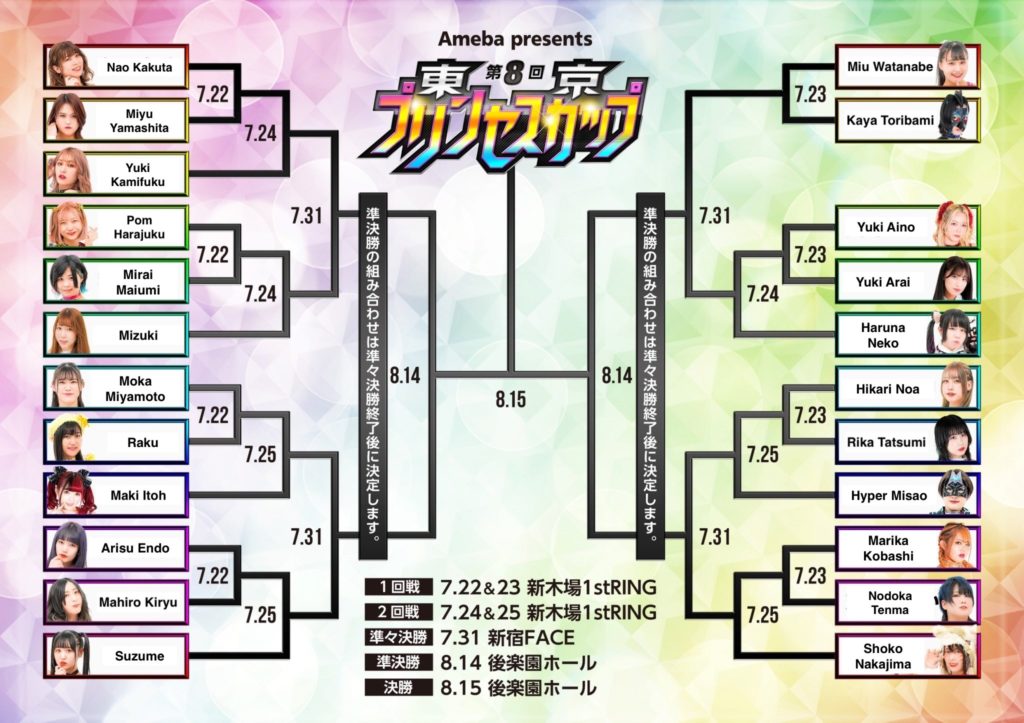 Can Mizuki win three in a row?

“The Sugar Rabbit” has compiled an impressive run in the Tokyo Princess Cup. After winning in both 2019 and 2020, Mizuki will look to make it three in a row this year. Despite being one of TJPW’s main event stars, she’s had a remarkably quiet 2021 so far. She has challenged for no championships as the main event scene revolved around Rika Tatsumi, Miyu Yamashita, and Maki Itoh. But the best way to heat up a challenger is to have her run through a tournament, and she’s easily a favorite this year. I like the idea of building a story around Mizuki conquering Yamashita after falling to Sakazaki last year; I also think the “3-peat” predictability is spooking too many people away from picking her. She’s my pick.

Undoubtedly TJPW’s (and perhaps joshi as a whole) highest profile international star, Maki Itoh has moved rapidly up the card this year. After a brief, polarizing excursion to AEW, Itoh summarily turned around and wrestled what was undoubtedly the best match of her career in a failed challenge of then-champ Rika Tatsumi’s Princess of Princess championship.

It seems rushed to have Itoh challenge again so quickly this time. The difference is that Itoh and Yamashita have been the story in TJPW this year. Their frienemy rivalry culminated at the big January Korakuen Hall show and eventually turned into a tag team. Seeing them clash for the POP title is a real possibility.

When will Shoko Nakajima return to the top?

If it seems like Mizuki’s taken a long break away from the top of the card, that’s nothing compared to Shoko Nakajima. She’s been completely removed from the main event scene since losing the POP title at DDT Ultimate Party in 2019. That means it’s been nearly two years. In fact, she’s spent much of that time as a comedy midcarder messing around with Hyper Misao as other wrestlers have been elevated. Much like Mizuki, a Nakajima win in this tournament would re-establish her as a top star, but Mizuki’s legacy and storytelling give her an edge.

TJPW has historically used this tournament to set up a massive world title match. As such, they only really book current and former top stars to win, like the aforementioned Mizuki and Shoko Nakajima in addition to Yuu and Reika Saiki. In my eyes, however, this is the perfect chance to elevate someone. Let’s remove the clear top six inYamashita, Sakazaki, Nakajima, Mizuki, Tatsumi, and Itoh.

Out of the rest of the field, I’d peg Yuki Kamifuku as the most likely to make a big run. While I think she’s still quite limited as a wrestler, she’s improved a ton over the last year. She filled in admirably with a six-month reign as International Princess champion, and the company is clearly high on her. We may yet be a year away, but Kamiyu is someone to keep your eye on.

I predict Mizuki, Maki Itoh, Shoko Nakajima, and Yuki Kamifuku as the four wrestlers most likely to win the tournament. Even within that group, Mizuki and Itoh are a step above the other two.