WWE RAW had as close to a once in a lifetime chance to change the company’s perception within one episode. The first RAW broadcast with fans in a year and a half due to a global pandemic gave them the ability to have the easiest crowd in the world to please. That part could even be manipulated with sound-sweetening if so desired. WWE took the momentum and goodwill gained by having John Cena return and close out the prior night’s Money in the Bank show and kept it going by having him start Raw off and make his intentions clear.

He’s out for Roman Reigns and to stop WWE from being taken over by an arrogant Universal Champion. It wasn’t an all-time great promo, but it was effective and emotional. It was a rare John Cena promo that made use of his improved acting ability to bring the crowd into it. He pointed out an 11 year old kid in the front row who came to see him and for the most part, the fan reaction to Cena did seem genuine. After so many years of Cena being hated, he seems to have earned the respect of fans after so so many years – absence made the heart grow fonder. 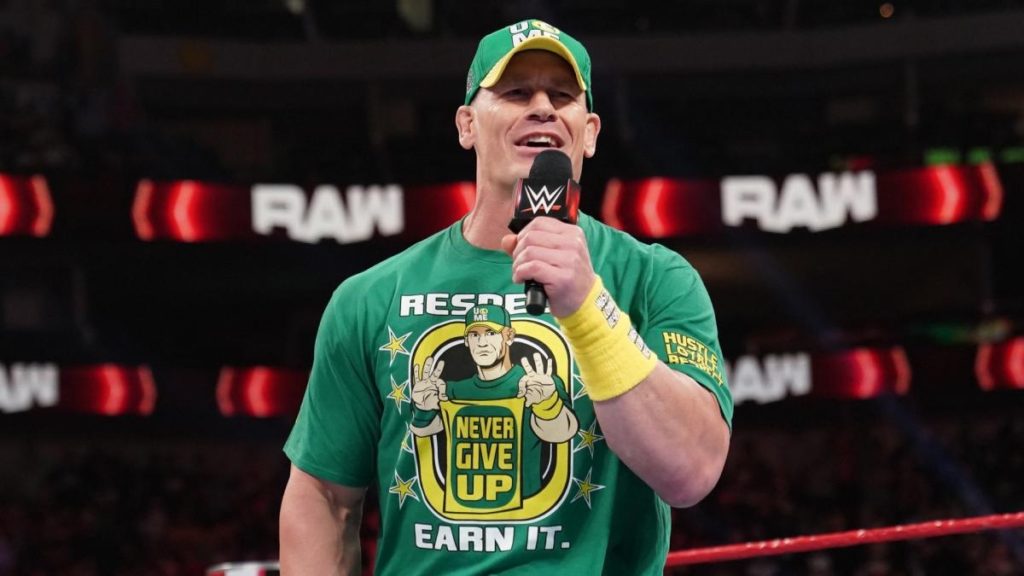 WWE followed this up with a pair of strong announcements with Charlotte having a celebration and Lashley in a title match before Omos was given a strong outing in a six-man tag. The Viking Raiders bumped great for him and his tree slam is the safest out there – so while he is quite limited, he should learn being in there with great workers every week. Omos is being put in a tough spot, but does at least have enough athletic ability to go beyond what Khali did in the ring. He’s also one of the few under-30 talents getting a push on the main roster and he has a lot of time to get better. In a tale of people who aren’t likely to get much better, Elias faced Jaxson Ryker in a goofy weapon match.

The second Symphony of Destruction match in WWE was much like the first. It had piano bumps and Elias getting all marked up in a weapons match that no one could take seriously due to what’s being used. It was an okay little brawl, but ended with a superplex off the top to the floor through two tables, so a basic street fight would have gotten to the same finish. Ryker is 39 and has soundly destroyed Elias in every match—but what can you do with him? He’s not good enough to push for a title unless he’s in the 24/7 brigade. Speaking of that, Reginald won it after doing some flips to Tozawa after Nia and Shayna lost and dropped him. In theory, that would add him to the list of pushed acts under 30, but it’s a nothing title, so it wouldn’t really count in this instance unless they suddenly change that perception and there’s no reason to believe that’s happening. 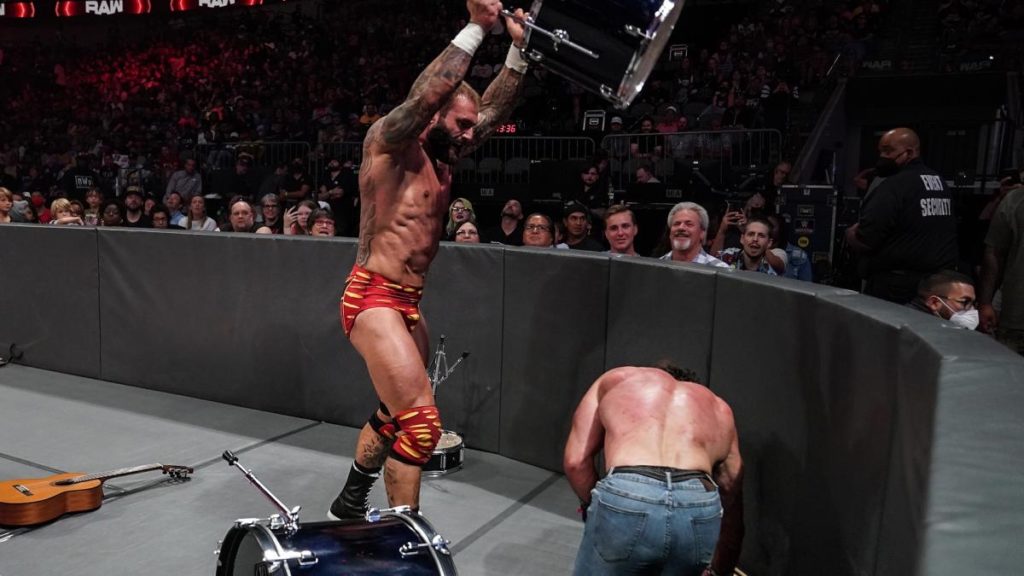 The WWE Title has thankfully been protected and Lashley is one of the strongest-booked acts in recent memory. WWE wisely took a formula that worked for TNA – having MVP as his hype man as he plays the role of unstoppable World champ, and took it to the next level. The All Mighty presentation works and he did battle with a returning Keith Lee. Lee was setup as a hometown guy in Texas, but lost in fairly quick fashion in a clunky match. Lashley has great power, but Lee’s mass made it tough to look impressive as Lashley awkwardly tried to avoid dropping him for slams. Lee was the setup guy for the returning Goldberg, who will pop a buyrate and a maybe a rating if he’s announced in advance. However, the greater story here is that a legend means far more than a current act in Keith Lee – to a scary degree.

It’s one thing to use a legend as a tent-pole act to build other talents around – like AEW did with Chris Jericho or Terry Funk did with ECW. WWE using them at the expense of building up a current crop of talent is worrisome and it’s a problem that was highlighted in the debuting Karrion Kross’ match as well. After an iffy main roster debut without Scarlett on Main Event, he came out without her again here and faced Jeff Hardy. Hardy is a legend who was put over as being a former World and WWE Champion while also coming out to his “No More Words” theme after losing for weeks on end on Raw and Main Event. What seemed like an easy win for Kross turned into a loss, and while there is a way to tell that tale effectively, this wasn’t it.

Kross tossed Hardy around with a few exploders, Jeff got a twist of fate, missed a swanton and then Kross went for his rabbit elbow strike – but couldn’t land it. Jeff elbowed him, Kross up top and ate a powerbomb with Jeff pinning him using a schoolboy cradle and the ropes. The babyface came off as a heel desperate for a win by any means necessary and the heel Kross was cheated. WWE had a super-hot crowd and three hours to work with and gave them under three minutes for their match. There is a way to have a legend re-ascend the mountain – New Japan did it with Tanahashi a few years ago, and WWE did it with Goldberg in 2017 by having him look strong against Brock and then beat Owens for the Universal Title.

Here, the NXT Champion just lost to Jeff Hardy and there was no attempt to make it seem like this was Jeff trying to conquer a new mountain. Instead, Kross showed up on NXT the next night and beat up Regal off-screen to set up a match with Samoa Joe. Jeff got nothing out of the win, Kross looked rather incompetent, and NXT came off as secondary despite being on USA for almost two years. Both former double champion Keith Lee and current champion Kross were hurt badly on one show and each should be a can’t-miss prospect for WWE. Kross has a main event-level presentation, while Lee is one of the best workers in the business when given a chance to shine.

Hopefully, WWE learns lessons from the mistakes made and corrects course as best they can. With Kross, it’s probably best to just move on and focus on the NXT feud with Joe and then when he loses that title, he can come in and say he was distracted before and his focus is clear now. Keith Lee has a taller task in front of him. His ceiling is now well below the WWE Title, but a series of matches with US Champion Sheamus could be fantastic as Sheamus will welt up nicely for his grizzly bear chops and their in-ring styles should mesh well. WWE should be in the business of honoring the legends of today while building up the stars of today to be tomorrow’s legends. They will have a hard time getting there with booking that undercuts the talent this severely.