Hello, fight fans, and welcome to this week’s edition of the Monday MMA Round-Up, where we look back at the week that was in the world of mixed martial arts and look ahead to the week that is. What a week it was, with UFC 264 now in the books, and there was plenty of news that came out over the past week. Let’s dive right in.

Here are some fights I would make next for those who fought at UFC 264 on Saturday night: 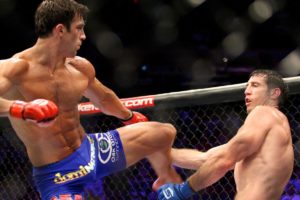 On July 14, 2012, Strikeforce held what ended up being one of the final few events in the promotion’s history in their first-and-only event to be held in Portland, Oregon, a night which saw two titles on the line.

In the main event, Strikeforce Middleweight Champion Luke Rockhold scored a unanimous decision win over Tim Kennedy to keep the title, which ended up being the final middleweight title fight in the promotion’s history. Both men would go on to move over to the UFC, and Rockhold eventually became a UFC Middleweight Champion.

You can watch Strikeforce: Rockhold vs. Kennedy on UFC Fight Pass here.

This week on In The Clinch, myself and Paul Fontaine will look back at UFC 264 and everything that went down. We will also look ahead to UFC On ESPN 26, talk about the news and fight announcements over the past week and much more. You can listen to In The Clinch on The Fight Game Media Network, with our Patreon page found here.