On June 26, Pro Wrestling NOAH’s ark will head into uncharted waters when co-holders of the GHC Tag Team Championship-turned-rivals, Katsuhiko Nakajima and Masa Kitamiya, prepare to face off inside a steel cage. This is the first time either man has ever competed in a cage match. It’s also the first time in the company’s twenty-one-year existence that NOAH has held a cage match.

Together, Nakajima and Kitamiya are known as the Aggression. They first became a force in NOAH five years ago and won the GHC Tag titles twice before splitting after Kitamiya defeated Nakajima after the 2018 Global League (now known as the N-1). Upon reuniting this year, the pair won the GHC titles from Takashi Sugiura and Kazushi Sakuraba on March 7.

The two share strange career parallels. Nakajima famously grew up as the adopted son of his trainer Kensuke Sasaki. Kitamiya idolized and trained under the legendary rival of New Japan’s Antonio Inoki, Masa Saito. Both have come up shy on recent GHC Championship challenges, as well.

Always a physical prodigy, many felt that despite being a previous GHC Champion, Nakajima still failed to live up to his potential until forming AXIZ with Go Shiozaki. However, Nakajima would turn on his partner, setting the stage for a championship battle with Shiozaki at last November’s NOAH Chronicle show. Unfortunately, Nakajima again fell short, becoming another page in Shiozaki’s epic 2020 Championship run.

In Nakajima’s quest to separate himself from Shiozaki’s shadow, he aligned himself with KENOH and the KONGOH faction. The group is fiercely loyal to leader, KENOH, though something about Nakajima’s presence has always felt off within the group. Many assumed it was only a matter of time before Nakajima would turn on KONGOH. However, the path to the eventual split took a bizarre turn when Nakajima and Kitamiya reformed the Aggression. 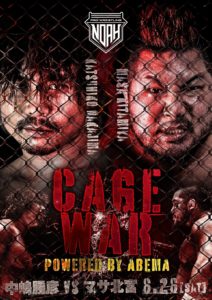 While Nakajima has gone out of his way to separate himself from Shiozaki and his mentor, Sasaki, Kitamiya has leaned closer toward honoring his mentor. Kitamiya is a burly ball of rage and a natural fit as KONGOH’s muscle, but that was before he reformed the Aggression. Since then, Kitamiya’s found another level, something his late mentor, Masa Saito, would approve of. The change benefited Kitamiya, who challenged Keiji Muto for the GHC title earlier this year. Much like his partner, Kitamiya stumbled, losing to Muto in the biggest match of his life. Though the team was back together, it didn’t mean that all was well in KONGOH.

On May 31, after successfully defending the GHC titles against Mohammad Yone and Shuhei Taniguchi, Kitamiya’s frustration’s boiled over when he delivered a Saito Suplex to his unwitting partner. It was Kitamiya who turned on KONGOH and demanded a match with his partner. In a strange twist, neither man wants to relinquish his share of the GHC Championship. The two attacked each other during a press conference announcing NOAH’s inaugural cage match (which will also be hair vs. hair).

Weeks into Naomichi Marufuji’s fourth run as GHC Champion, all eyes are on the finish of this match, where the victor will surely go on to challenge for the title. Will Nakajima be able to overcome his former partner on his way back to the crown, or will he falter like he did against Shiozaki in November? Or is this the next step on the path to Kitamioya’s eventual ascension to the top of the Ark?

Pro Wrestling NOAH presents CAGE WAR live this Saturday for FREE on ABEMA TV in Japanese or in English on FITE.tv.