Hello, fight fans, and welcome to this week’s edition of the Monday MMA Round-Up, where we look at all of the happenings in the world of mixed martial arts. Despite a couple of major events going down, it was a relatively quiet week, so let’s get into what is going on.

Looking Back at UFC On ESPN 25

RNC to start the card off by Casey O’Neill #UFCVegas29 pic.twitter.com/NzXDp19jq2

Here are some fights I would make next for those who fought at UFC On ESPN 25 on Saturday: 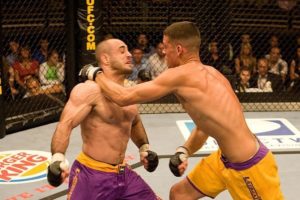 On June 23, 2007, two of the biggest stars in UFC history, albeit at different stages of their careers, competed on the same card at The Pearl at The Palms Casino & Resort at The Ultimate Fighter 5 Finale. It wrapped up season five of The Ultimate Fighter, one of the best seasons of the reality show, which produced several notable fighters who competed in the UFC, some of whom still compete today.

In the main event, former and future UFC champion B.J. Penn submitted one of his biggest career rivals, as he choked out Jens Pulver in the second round in the battle of TUF 5 coaches. In the co-main event, future UFC megastar Nate Diaz earned his UFC contract when he defeated Manny Gamburyan in the finals of the TUF 5 tournament. Penn and Diaz have been in some of the biggest fights in UFC history, and are two of the biggest stars to compete in the sport, both with hardcore followings.

Also on the card was Joe Lauzon, Gray Maynard, Matt Wiman, Leonard Garcia, Cole Miller, Roger Huerta, Thales Leites and a host of others. You can watch The Ultimate Fighter 5 Finale on UFC Fight Pass here.

This week on In The Clinch, myself and Paul Fontaine will recap UFC On ESPN 25, talk about the judging controversy in the fight between Rory MacDonald and Gleison Tibau, preview UFC On ESPN+ 48 and the other big MMA events this week, talk about Paulo Costa and much more. You can listen to In The Clinch on The Fight Game Media Network, with out Patreon page found here.