Hello, fight fans, and welcome to this week’s edition of the Monday MMA Round-Up, where we look back at the week that was and look ahead to the week that is in the world of mixed martial arts. Let’s dive right into what is going on in the MMA world.

Looking back at UFC on ESPN+ 47

Here are some fights I would make next for those who fought at UFC On ESPN+ 47 on Saturday:

Here are some of the major MMA events coming up this week: 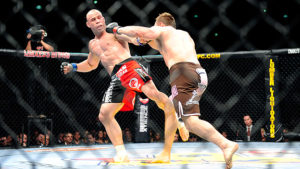 On June 13, 2009, UFC held their first-ever event in Germany, which was also the first-ever UFC event on mainland Europe, as UFC 99 took place at the Lanxess Arena in Cologne, Germany. The event was an overall success, drawing 12,854 fans for a gate of $1.3 million. It was also a success on pay-per-view, at a time when UFC was drawing extremely well on PPV, earning 360,000 buys.

In the main event, Rich Franklin scored a unanimous decision win over Wanderlei Silva in the “Fight of the Night”. In the co-main event, future UFC Heavyweight Champion Cain Velasquez scored a unanimous decision win over Cheick Kongo. The rest of the main card saw Mirko Cro Cop finish Mostapha Al-Turk in the first round, Mike Swick scoring a second-round TKO over Ben Saunders, Spencer Fisher winning a decision over Caol Uno, and Dan Hardy taking a split decision over Marcus Davis.

Among the winners on the prelims were Terry Etim, John Hathaway, Paul Taylor, Paul Kelly, Dennis Siver, and, in one of the bloodiest fights in UFC history, Stefan Struve, covered in blood, submitted Denis Stojnic in the second round.

You can watch UFC 99 on UFC Fight Pass here.

This week on In The Clinch, myself and Paul Fontaine will look back at UFC On ESPN+ 47, look ahead to UFC 263, preview some big fights on PFL #4 and Bellator 260, talk all of the news and everything else. You can listen to In The Clinch on The Fight Game Media Network, with our Patreon page, found here.