Hello, fight fans, and welcome to this week’s edition of the Monday MMA Round-Up, where we look back at the week that was and look ahead to the week that is in the world of mixed martial arts. It was a busy week, so let’s get right into what is going on.

"I worked so hard for this!"

Here are some fights I would make following UFC 263 on Saturday night: 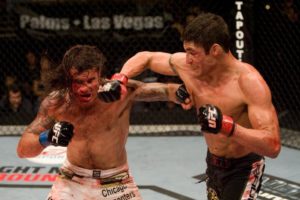 On June 20, 2009, one of the best fights in UFC history took place, one that ended up being inducted into the Fight Wing of the UFC Hall Of Fame. It headlined The Ultimate Fighter 9 Finale, which took place at The Palms in Las Vegas, in front of 2,217 fans.

In that all-time classic, Diego Sanchez scored a split decision over Clay Guida in a back-and-forth brawl. It got off to a hot start with the two of them just throwing big shots at each other in the opening seconds, and they never let up throughout the fifteen minutes. It established both men as must-see fighters, and was the real fight that gained Guida the recognition as a hardcore fan favorite. The win would propel Sanchez into a title shot against then UFC Lightweight Champion BJ Penn.

Also on the card, two new Ultimate Fighter winners were declared, both of them from England, as James Wilks and Ross Pearson earned the six-figure contracts. Also on the card, Chris Lytle scored a decision win over Kevin Burns, and former TUF winners battled as Joe Stevenson got a decision over Nate Diaz.

You can watch The Ultimate Fighter 9 Finale on UFC Fight Pass here.

This week on In The Clinch, myself and Paul Fontaine will recap UFC 263, look back at some notable stuff that took place on the Bellator and PFL shows, look ahead to UFC On ESPN 25, and much more. You can listen to In The Clinch on The Fight Game Media Network, through our Patreon page found here.