Mike Tyson is probably the biggest what if in boxing history. What if Cus D’Amato hadn’t died? What if Kevin Rooney would’ve never been let go as his trainer? What if Tyson had rejected Don King’s advances that led to taking control of his career? One thing is for certain, change all three scenarios and Tyson would’ve easily been higher than the 42nd greatest fighter of the last 45 years.

Boxing’s heavyweight champion of the world used to be considered the premiere athlete and title in sports. Men like Jack Johnson, Jack Dempsey, Joe Louis, Rocky Marciano, Sonny Liston, Muhammad Ali, George Foreman, Joe Frazier and Larry Holmes became almost mythical-like figures while carrying the mantle of Heavyweight champion. Mike Tyson continued this tradition with his mercurial rise to the top of the division. The late 1980s saw Tyson, outside of the recently deceased Diego Maradona, as the biggest sports star on the planet. On the eve of his 22nd birthday, Tyson was as invincible as any athlete who ever lived. The only thing that could defeat Tyson was himself. Unfortunately, over a period of time, that’s what happened.

My father loved Tyson’s hunger inside the ring. My father instilled in me since he began teaching me to read that the most lethal combination in boxing was incredible talent and hunger. Tyson possessed both and my father was right. Tyson was basically living on the streets as a 13-year-old beating and robbing people when he was sent to a youth detention group home in Upstate New York. While there, he caught the attention of longtime Upstate New York trainer Cus D’Amato. D’Amato would mold Tyson into a near picture perfect fighting beast as well as adopt him as his son. Because the elderly D’Amato was 77 years old when Tyson turned pro in 1985, Cus’s disciple Kevin Rooney had taken over the reigns as Tyson’s chief second. D’Amato died on November 4, 1985. My father felt that his death would make Tyson even hungrier and more dangerous in the ring. It also was the first opening for the nefarious King to get involved.

In less than 18 months as a professional, Tyson fought 27 times, winning all but two by knockout. Then, he knocked out WBC Champion Trevor Berbick in two rounds on November 22, 1986 to become the youngest champion in the storied history of the division at just 20 years of age. Suffice to say that with this victory in his first world title fight, HBO and King were banking on Tyson winning the undisputed title in a tournament they were promoting. I was away from home while attending college in New Orleans at the time. My father told me the night after Tyson obliterated Berbick on a long distance phone conversation that there was nobody at heavyweight who stood a chance against Mike. His hunger and skill level was something that was unmatched. 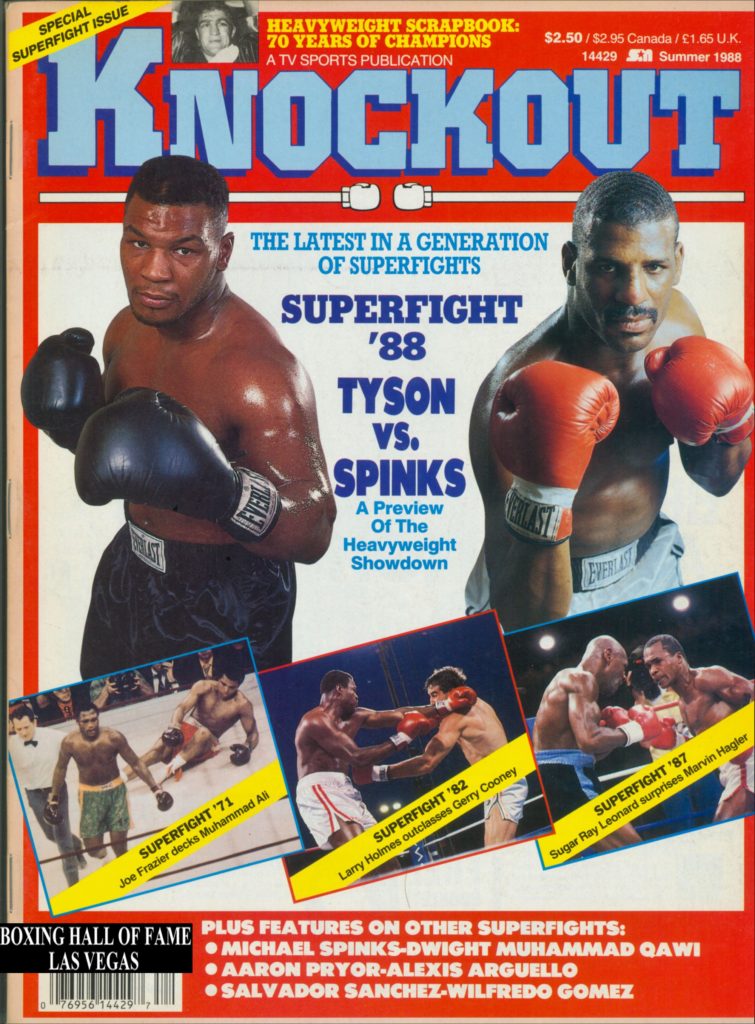 Tyson defeated the WBA Champion Bonecrusher Smith and IBF Champion Tony Tucker on consecutive 12 round decisions to unify all three governing sanctioning bodies. This, coupled with The Ring Champion Michael Spinks’ fifth round destruction of Cooney in June of 1987, would culminate in the signing of the biggest prizefight ever financially up to that point. Three months before the fight occurred, Tyson lost another close confidant to death, his co-manager Jimmy Jacobs. With Jacobs and D’Amato now both out the way, King was able to worm his way into being the single, guiding factor in Tyson’s life.

The Spinks fight was a complete mismatch. The night of the fight, as I was on summer break from school, my father and I watched it at a dingy night club in Greenwich Village. The tickets were only 15 dollars a pop, so I can’t complain that much. As we sat in a packed club anticipating the fight, my father, who was completely inebriated, predicted the fight wouldn’t go 90 seconds. He was wrong; it lasted 91 seconds.

The reason Pop predicted it wouldn’t go 90 seconds was because Spinks delayed his ring entrance which infuriated Tyson to the point where he punched a hole in a dressing room wall and that Spinks had braces on both knees. He was a sitting duck as evidenced from the very beginning of the fight. Tyson came straight at Spinks and dropped him with a thudding right to the rib cage just over a minute into the fight. Spinks got up at the count of four. After referee Frank Cappucino’s mandatory eight count, Spinks immediately walked into a thunderous right cross that sent his head bouncing off the canvas. Spinks, in his attempt to get up, almost fell through the ropes as Cappucino counted him out. Tyson was finally the universally recognized heavyweight champion of the world. It was also the beginning of the end for the 22-year-old champ.

After the Spinks destruction, Tyson immediately fired Rooney and his manager Bill Cayton. He gave Don King complete control of his career and surrounded himself with yes men. After knockouts of Carl Williams and Frank Bruno, Tyson went to Japan to defend against James Buster Douglas in February of 1990. Other than a knockdown he scored against Buster in round eight, Tyson did absolutely nothing as Douglas boxed circles around him before putting him to sleep in the 10th round, as I described in a previous article. My father that night said that the hunger Tyson had was completely gone. That Tyson hunger would only return from time-to-time.

Tyson would win his next four fights before signing to fight the then undisputed heavyweight champion Evander Holyfield in November of 1991. Unfortunately, Mike suffered a rib injury while sparring and the fight was postponed. That previous summer, Tyson was charged with raping Desiree Washington. Washington was a beauty pageant contestant he met in Indiana as a judge. Tyson’s trial began at the beginning of 1992 and he was subsequently found guilty. Tyson was 25 and would lose three years of his prime while incarcerated. He would be released from prison in March of 1995.

Tyson would begin his comeback with the unknown Peter McNeeley five months later, a laughable farce of a first round blowout. On March 16, 1996, Tyson destroyed WBC champion Frank Bruno to regain a portion of the heavyweight crown he once held. Instead of defending the title against the WBC number one contender Lennox Lewis, Tyson vacated the title and instead fought the WBA champion, a journeyman named Bruce Seldon. Seldon was a Don King manufactured champion. That fight was held the same night Tupac Shakur was shot in Las Vegas. Tupac and Tyson had become very close. Seldon was knocked out in the first round by a phantom Tyson punch. Tupac died six days later. Tyson’s first defense would occur two months later on November 9, 1996 against what my father and I thought was a shot Holyfield.

Holyfield had engaged in wars with George Foreman, Michael Moorer, Ray Mercer and a life and death trilogy with Riddick Bowe. In his last fight against Bobby Czyz, Holyfield looked like a zombie. At 34 years old, he looked like a sacrificial lamb for King and Tyson to feast on. Instead, Holyfield began one of the greatest resurrections in boxing history. He battered Tyson from pillar-to-post before referee Mitch Halpern stopped the fight in the 11th round as Tyson was helpless in the corner. The rematch, held seven months later, was more of the same before a completely frustrated Tyson bit a chunk off of both Holyfield’s ears in the third round, causing him to be disqualified and suspended for 18 months. By the time Tyson stepped back in the ring at the age of 32 on January 16, 1999 against South African Francois Botha, he was a shell of his former self. Tyson was being completely outboxed until he landed a bone crushing right cross that knocked the South African out. Five fights later, Tyson would finally meet Lewis for Lewis’s undisputed heavyweight title on June 8, 2002, a little over four months after the infamous New York press conference where the two men got into a scuffle and Tyson bit one of Lewis’s legs.

Lennox Lewis totally outclassed a faded Tyson by controlling the distance with his jackhammer left jab and right cross. Finally, in round eight, Lewis put Mike out of his misery by knocking him out with one of his patented right hand missiles. The career of Mike Tyson was, for all intents and purposes, over.

Tyson fought three more times while getting knocked out in his last two fights against journeymen Danny Williams and Kevin McBride. Tyson would finish his career with a record of 50-6 with 44 knockouts. After years of substance abuse and the tragic death of a young daughter, Tyson has reinvented himself and is seemingly happier than he’s ever been. While criminal that his career ended up falling short of his amazing talent, it is great to see Mike enjoying life and being looked at as a cultural icon now in his mid 50s.