WWE Backlash has been the post-WrestleMania show for the best part of the last 22 years. There have been 15 events in 13 different locations over three different decades. A total of 163 wrestlers have competed on Backlash cards across its history. Of 112 matches total, 17 of them have been for WWE championships, while others have been for the Money in the Bank briefcase, or the title of “Ms. WrestleMania.” To find out who the best Backlash performers are, rather, who Mr. & Ms. Backlash are, I will go through a process of elimination, but before that, I want to point out some neat facts. 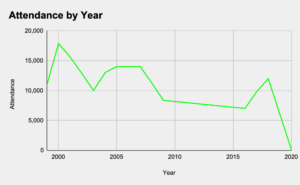 The highest-attended Backlash event was the 2000 event in Washington D.C.’s Capitol One Arena. The lowest came exactly two decades later in the WWE Performance Center amidst COVID-19, with zero in attendance. The lowest fan-attended number was the 2016 event in the Richmond Coliseum with just 7,000 in the room being reported. Over the years the average attendance is 11,379. 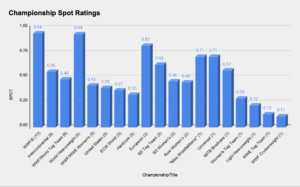 Here is a breakdown of the SPOT rating of every championship defended on a Backlash show. In parantheses are the amount of times the championship has been fought for on the shows. The WWE Championship has been in the main event nine times out of thirteen times being defended, the most of all the titles and is the undisputed most important title in Backlash history, as it should be. The Intercontinental title deserves a mention with its nine matches but the SPOT rating isn’t what it should be. If Backlash continues I can see the RAW & SmackDown Women’s Championships numbers going up as well as the Universal Championship. 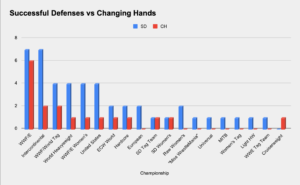 This one shows how likely a title is to be retained vs. changing hands. Backlash is a rest stop show between the big four annual events, so this tracks. Overall, championships have been retained at Backlash a whopping 71.88% of the time. I wouldn’t be expecting many changes at this year’s event.

2007 immediately jumps out as the only card to average above three stars in the WON ratings. According to Cagematch, three Backlash matches received a ****½ rating: The four-way featuring John Cena defending the WWE title against Shawn Michaels, Randy Orton and Edge. 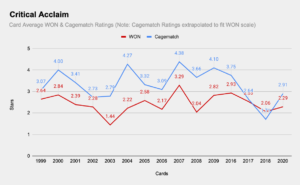 2018, interestingly, is the worst, according to Cagematch users, which doesn’t feel entirely accurate. I remember seeing hand-held footage of fans leaving during the Roman Reigns vs Samoa Joe main event and I bet those ungrateful folks wish they hadn’t done that now that Joe is gone from the company. But in Cagematch users’ defense, it was a pretty shitty show. You had a great Miz vs. Seth Rollins opener, but it was downhill from there. 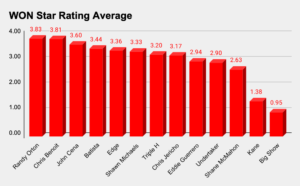 For all eleven pre-WWE Network shows only North American buy numbers were available to me but it really tells you all you need to know, doesn’t it? The four most popular Backlash cards had these guys in the main event; Steve Austin, the Rock, Triple H, Undertaker, Kane and Hulk Hogan.

The show with some of the lowest numbers is also the most critically acclaimed, ironically. Projected match quality didn’t seem to draw as much then as much as it does now. The spike for the 2000 event is quite astounding in comparison to the years before and after, as well. 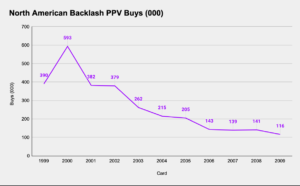 32 women have competed on Backlash. To narrow it down, I’m going to have only those who have wrestled on two or more Backlash cards in their career which leaves us with 12.

There unfortunately have been no women in the main event in Backlash’s history, so I can’t use number of main events for the second round. I’ll be using SPOT ratings instead, and will eliminate those who have a SPOT rating under .40.

Though I don’t want to use match time as a way to rule people out because its well known that countless women got the short end of the stick when it came to allowed match time on pay-per-views in this era, and it’s especially evident during the 1999–2009 period in WWE, with a grand total of 6.83 women’s matches across eleven shows. 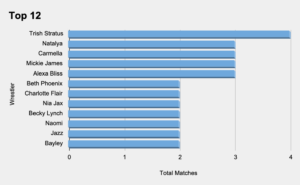 Another wrinkle is that with women’s matches being much shorter and happening far less often than men’s throughout this history, critical acclaim just doesn’t really apply like it does for the other side of this.

To eliminate some more from the field, let’s look at who of the remaining ten have wrestled in championship matches and how many. 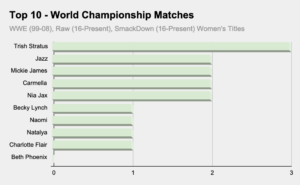 Let’s go ahead and eliminate the bottom half, leaving those who’ve had two or more world title matches in their Backlash history.

This leaves us with Trish Stratus, Jazz, Mickie James, Carmella and Nia Jax.

This may defy some logic, but there isn’t as vast an array of statistics to work with like there is for Mr. Backlash; the title of Ms. Backlash goes to Trish Stratus. The .41 SPOT rating may not look great but it’s really a .58 given the highest being .71 and not 1.00. You just have to take into account that era of women’s wrestling in WWE. To further back it up, Trish has wrestled on four Backlash shows, all of which were far more commercially successful than ones the other four competed on with the exception of Jazz. She fought three times for the Women’s Championship and once in a handicap teaming with Christian against Chris Jericho. 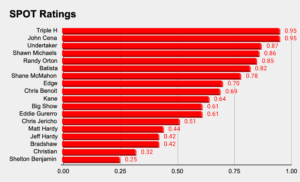 I wanted to do more with this side of it but when there’s one women’s match for every seven or eight men’s matches for the first two thirds of Backlash’s history there isn’t as much data to work with. Either way, congratulations to the reigning Miss Backlash Trish Stratus.

Over 130 male wrestlers have gotten a Backlash payoff in their career. 74 have only had a ‘Lash once, 28 twice, 12 three times, and I’m ruling all of them out, which leaves us with 19 wrestlers. Let’s rule 18 more out. 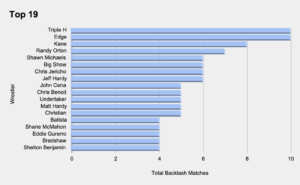 In an attempt to try and rule some more guys out, let’s bring the SPOT ratings back into the fold and see what’s up.

I’m going to eliminate everyone with a SPOT rating under .50. Leaving us with 14 Mr. Backlash candidates. It should shock no one who the top two are under the SPOT ratings. For the next round, I think we have no choice but to play the critical acclaim card.

I’m going to eliminate everyone with an average below 3.00 which leaves us with the Elite Eight of Orton, Benoit, Cena, Batista, Edge, Michaels, HHH & Jericho. Let’s next look at the number of actual main events that each of these eight have competed in.

Here, the bottom half will be eliminated from the field. This leaves us with four of the biggest stars of the aughts, maybe THE top four. Triple H, Edge, John Cena and Randy Orton.

I think this one has to go to Triple H, who looks to have the strongest Backlash resume, by far. For all you can say about him, he was one of the biggest stars of the 1999–2009 stretch. You really have to just chalk this one up to timing.

Edge is the runner up here, for sure. Longevity, match quality, and main events all added up. 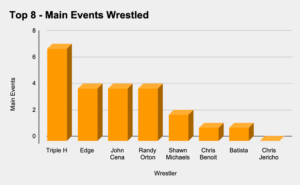 I was shocked that Randy Orton had the highest star rating average, not because of him, more because of who he was up against. I can’t very choose who is third and who is fourth with Orton & John Cena, both of their resumes are incredibly solid. You might have to give the edge to Cena for SPOT rating, match significance, four of five times closing the show.

So, then: Congratulations to Mr. Backlash, Triple H.

I hope this silly amount of  information has enriched you.