Physically speaking, you cannot get more different than Travis Rice and Tanner Farmer. Rice competes at 60 kg (132 lbs), while Farmer wrestles at 130 kg (286 lbs). Both are small-town, central Illinois natives who currently wrestle for the Illinois Regional Training Center (IRTC). While each cemented their position at the 2021 Greco-Roman Olympic Trials this weekend, their paths were very different.

At 6’5″ and walking around at a lean 300 lbs, Tanner Farmer was born to play on the offensive line. As a high school standout at Highland High School, Farmer was named All-State and secured a full scholarship to play for the University of Nebraska. However, one thing kept getting in the way. 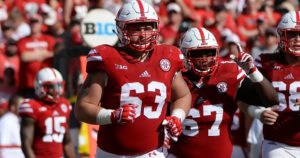 “Growing up, I wanted to win an Olympic Gold Medal and play in the NFL. When I got older, my dad kinda told me I had to choose one, so I went after football cause it made the most financial sense— but don’t get me wrong, wrestling has a special place in my heart.”

Travis Rice was fortunate enough to live in Washington, Illinois, a small town known for developing top-level wrestling talent. As a high school student, Rice wrestled for Bryan Medlin, the current IRTC head coach. As an athlete, Medlin wrestled Greco-Roman for the Marine Corps and later the United States Olympic Educational Center (USOEC) at Northern Michigan University. When Medlin took over the Washington High School program be brought Greco-Roman with him. Medlin quickly took over the Illinois National Greco program and turned the state into a perennial power. Team IL won the USA Wrestling Greco team title in the Junior division (17-18 years old) every year since 2007 and the Cadet (15-16) championship every year since 2013. Travis Rice was right there with him, falling in love with Greco and winning his own Junior National Championship in high school. Rice followed Medlin’s path to NMU and the USOEC. While at Northern Michigan, Rice made two Junior World teams and the 2018 Under-23 (U23) World Team. However, after a disappointing 2019, Rice knew he needed a change.

Tanner Farmer started for the Cornhuskers for three seasons, but after the 2018 season, he failed to catch on with an NFL team. Not wanting to give his athletic pursuits up, Farmer enrolled at Concordia University in Nebraska as a coach and graduate assistant. To Farmer’s surprise, he discovered he had a semester of eligibility left and decided to step back onto the mat. At Nebraska, Farmer would frequently attend wrestling practices to help train with the Cornhusker heavyweights. Feeling he could still go, Farmer competed for the Bulldogs. After five years away from wrestling, Farmer finished second at the NAIA National Championships. With his elite-level offensive line hand-and-foot-work, his coach recommended Farmer make the transition to Greco. Farmer, who wrestled Greco for one summer in high school, liked the idea but struggled to find the right training environment. To Farmer’s surprise, the University of Illinois had hired his former Greco coach to head up their fledgling Regional Training Center program, Bryan Medlin.

“I’m very thankful and blessed to have found my way back into wrestling. I hope I can make a positive impact on the wrestling world the way it’s made on me.”

Implemented by former US Olympic coach Zeke Jones, the Regional Training Center system allows colleges from across the country to hire coaches who specialize in Freestyle. The United States is the only country in the world that competes in the collegiate style (known colloquially as folkstyle). The rest of the world participates in either Freestyle or Greco-Roman, two systems with very different fundamental rules. Often, the transition from high-level folkstyle to world-class freestyle can be difficult. Thanks to the RTC systems, college athletes can train with elite International style coaching. Post-graduate athletes can make a comfortable living, thanks to RTC fundraising efforts, while training to win World and Olympic medals. While most colleges have focused on Freestyle, the University of Illinois RTC program, under Medlin, has found success in Greco. With Medlin came World Team members like Max Nowry and Joe Rau and 2012 Olympian Ellis Coleman. Jumping to the RTC made sense for both Rice and Farmer. 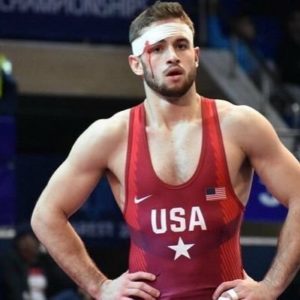 “The way I looked at it, I wasn’t thinking about qualifying for the Olympic Trials. I was looking at this as getting to the Olympics.” Travis Rice was disappointed with his 2020 performance. Heading into last week’s Olympic Trials qualifier, he felt he needed to prove something to both himself and the world at large. Rice used the time off from the Covid pandemic to heal both physically and mentally. He attributes Medlin’s straightforward coaching style to his turnaround. “He tells you what you need to hear. It might not be what you want to hear, but it’s what you need.”

Upon doing the IRTC, Farmer made an immediate impact on the Greco scene, winning last weekend’s Last Chance qualifier. Though Farmer has a tough road ahead in qualifying for the Games, having two-time World Team member and 2018 World Silver Medalist Adam Coon in his weight class, he feels confident.

“I don’t want to sound cocky, but I plan on being the best in the world for the next ten years. I want to put in the work. I feel I’ve come a long way in a very short time. If I continue to be around the great guys in this club and these great coaches I’ve been around, I don’t see a limit for myself.”

Both Rice and Farmer are long shots to qualify on paper. Rice is seeded 7th in the tournament, while Farmer is locked into the 6th position. However, seeding means very little when the whistle blows and the toes are on the line. Both men have taken very different paths to this moment, but both have a career of defying expectations and finding success.