Throughout much of its existence, ONE FC has been able to carve a niche out for itself by hosting a lot of top-tier talent on its shows, but did so with minimal exposure in the US. The group has been on TNT before, but never quite with a full-on fight card, and ONE on TNT 1 was designed as a way to introduce people to the company right after AEW Dynamite. The entire month of April will feature ONE events, and if the first night is any indication, they should be thrilling affairs more often than not, with a few rough edges sprinkled in.

The event started off strong with a showcase of Singapore’s sights while Michael Schiavello ran down the opener – Eddie Alvaraz facing Iuri Lapicus. In a smart move, the promotion showed that Lapicus was ranked fairly high in his weight class, while Alvarez wasn’t. This tells a tale without words that he’s a diamond in the rough and while you as a new viewer may not have heard of him, he is quite skilled and in 2021, finds himself far above a world-renowned athlete in Eddie Alvarez.

For a fighter like Alvarez, who was showcased as a top-level star in both Bellator and the UFC over the past decade, ONE getting on TNT could be thought of as a big deal. He’s back on a massive worldwide stage and a great performance doesn’t just bode well for him now, but in the future when contracts come due. Since joining ONE two years ago, he has had only one win in August of 2019, and a loss at 37 after already going to and from two other major league groups doesn’t look good on the ledger. They circle, Alvarez takes him down and Alvarez starts throwing hands. A couple of shots land where they should, but Lapicus turns into them and a couple wind up hitting him in the back of the head. The ref stops the fight and after many minutes of awkward on-screen action, Alvarez is DQ’ed. 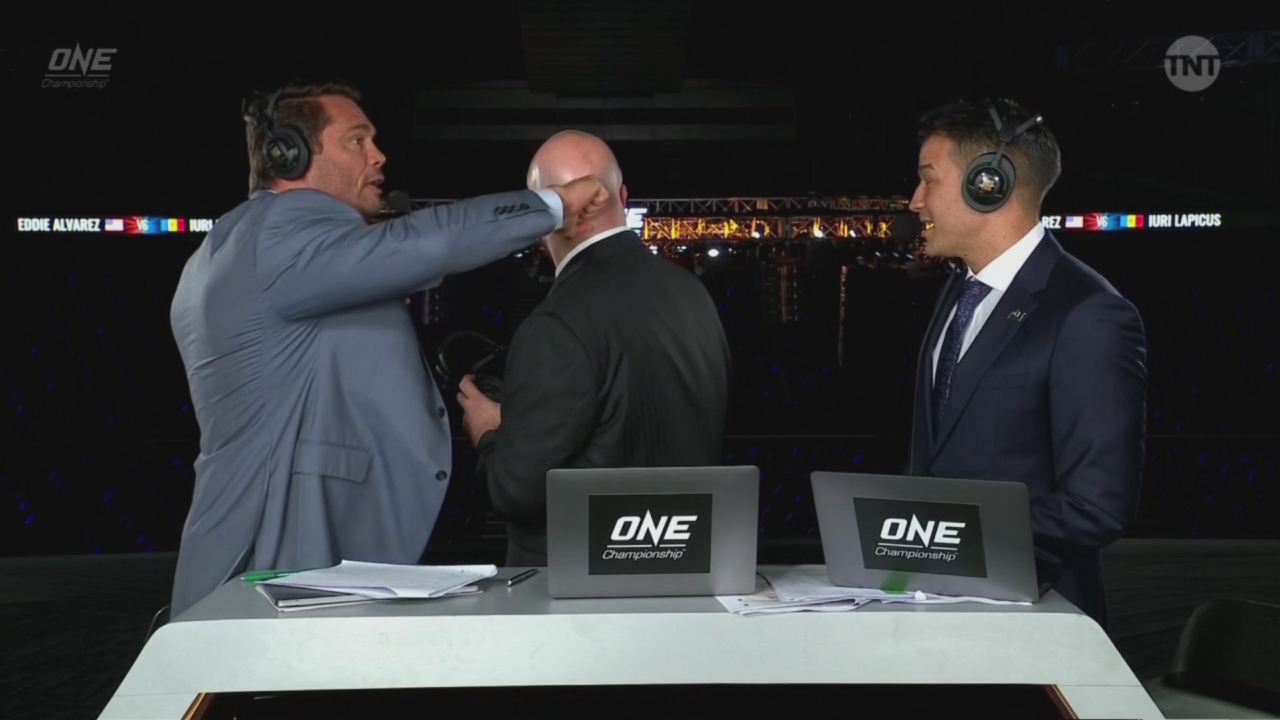 For ONE FC, giving one of their bigger stars the opening slot was a smart move to show that they have top-notch talent, but Dame Fortune didn’t smile upon them in this fight. Michael Schiavello asked several times what the status of the fight is, only to throw to Eddie Alvarez on a headset mid-cage. The only problem was that Eddie couldn’t hear him, so they cut to the announce team where Rich Franklin makes a great point that while Eddie may not have been trying to strike the back of the head he did do so given what the back of the head is defined as. In a slightly awkward moment, he asked Michael to be his practice dummy and showed just what “the back of the head” means in ONE, showing that it was a good call by the ref to DQ Eddie, even if it wasn’t a popular call.

They finally got Eddie’s headset working, where he then expressed a wide range of emotions, making this even more captivating, even if it wasn’t what anyone would call “good.” He just wants everyone to be safe and doesn’t want anyone to leave on a stretcher because of him—very much like Bret Hart in that regard. It was a very down to Earth, passionate speech from someone who had just lost on a big stage in a way that could hurt him down the line.

The legendary flyweight and 2019 ONE Flyweight GP winner fought for the flyweight crown and did a fine job in round one early on, but was taken down and was heel hooked, albeit briefly. Moraes thew hands, but neither had much behind their shots. The second round featured faster-paced action, and DJ eventually got blistered off of a right uppercut, then KO’d with a knee to the jaw. Schiavello did a masterful job saying that while newcomers to ONE may be shocked, he isn’t, because he’d seen Moraes fight and knew how good he is. He wouldn’t be champion if he wasn’t world-class, and with a win over arguably the greatest pound-for-pound fighter of his era, Moraes’ stock skyrockets. 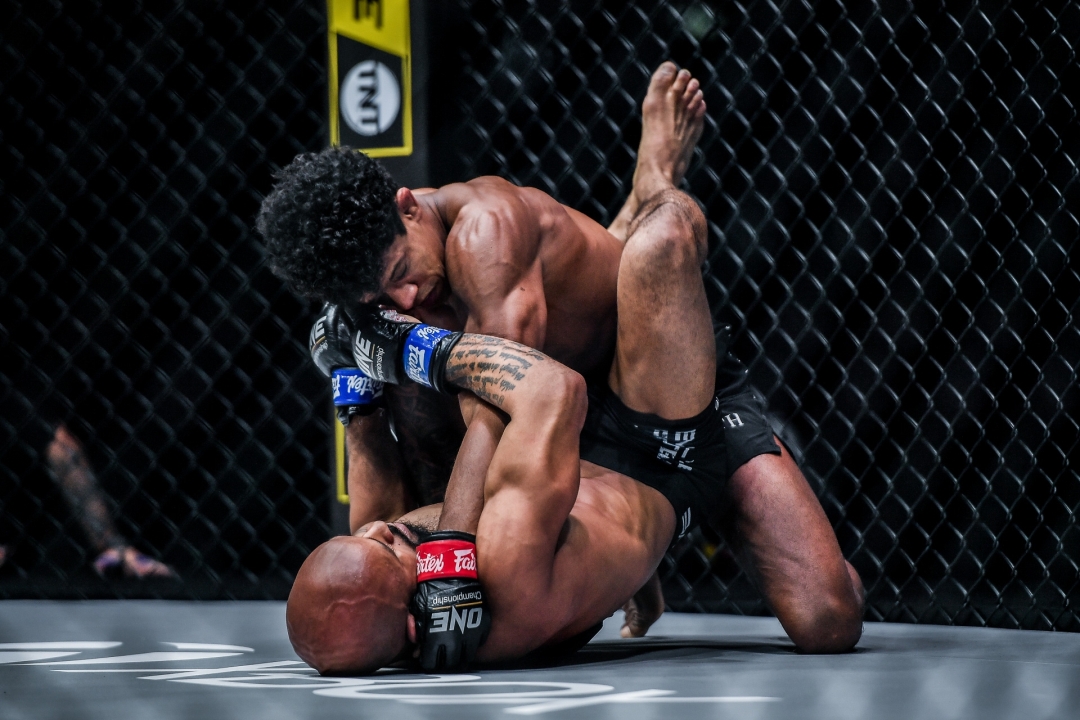 Two fights into the card and we saw how masterful a job ONE did making chicken salad out of chicken crap, with at least turning a DQ into captivating television, and between one dominant hype video and one dominant win, they showcased their homegrown stars who are among the best in the world; ONE just didn’t have the exposure to prove it to the masses before. Then, things got a bit weird: We got prelim recaps with no real context, so while it was better in theory to show fighters winning and going through the card as a whole, the lack of context in the vignettes hurt. It was hard caring about who’s who. This is a thumbs-in-the-middle feature, but it did more good than harm. Having this show follow the buffet of pro wrestling on AEW Dynamite was a perfect programming fit because, in both instances, you can crave just about any kind of fighting action and see it on TNT.

In a very strange bit, they ran down their next month of cards, causing me to think the show is over, but it wasn’t—the best actually was yet to come.

In the final fight of the televised portion of this card, Rodtang Jitmuangnon AKA Rodtang did battle with Danial Williams in an exciting Muay Thai fight. Schiavello did a masterful job explaining that while there wouldn’t be grappling here, you will see faster and better-executed strikes since they are experts in their field.

Rodtang came off as a huge star with a beautiful entrance video set to “TNT” by AC/DC. He danced to the ring and came off as special. He didn’t mind looking goofy, but is serious and Schiavello talks about his impressive 84% winning percentage in a field where 70% is considered very good. He’s also only 23 and has over 200 wins.

This was an all-action war, with Rodtang throwing leg kicks with an impressive snap before they just start slugging it out. Williams ate a big left hook and went down, but got up before ten to eat more shots, including a series of elbows that sliced him up. A between-round break allowed Williams to recover, but the fast pace took its toll and he are more shots, getting Rodtang so bloody that he needed to be cleaned off. Round three featured more hard shots, including some nasty uppercut elbows that jarred Daniels. Daniels came back with a nice right hook of his own and showed flashes of greatness towards the end. Rodtang won in an easy decision.

This was the kind of star-making fight that each MMA group has tried to have on a big international debut show. There were some stumbling blocks early on, but the crew soldiered on and wound up creating a very memorable event that hopefully won’t get lost in the shuffle. The main event was a must-watch, but even the opener was fascinating to watch unfold. For a night full of ups and downs, the event left me with a feeling that ONE has a top-notch roster and some of the best production values in MMA. It wasn’t a home run show, but it did have a home run fight that showcased a genre in Muay Thai that you won’t see on any other MMA show broadcast regularly in North America.