The early ’90s were a turbulent time for the World Wrestling Federation. The company was coming down from its late-’80s high, but still had a fair amount of star power that complemented video games. WrestleFest followed up on Superstars from a few years prior and took the same kind of button-mashing gameplay to the next level. Everything was more polished, with gameplay allowing for a more natural flow from move to move and the graphics were bumped up considerably. The WWF’s cartoony and bright visual style was hit or miss, but for an arcade game trying to catch your attention and snag your quarters, it was perfect. Depending on the mode, you could have tag team matches or a Royal Rumble that filled the screen with bombastic personalities.

Despite the game’s popularity and high marks, it never received a console port, meaning that SNES and Genesis gamers were stuck with Acclaim’s lower-quality offerings. A 2012 mobile game inspired by WrestleFest hit digital storefronts but failed to deliver the same kind of thrills, and its Xbox Live Arcade port was quietly cancelled. For nearly a decade, fans were left without anything to capture their imaginations like WrestleFest—until RetroMania was announced.

With humble beginnings starting with the Road Warriors, the original boss characters in WrestleFest, it grew to include a rather impressive lineup of talent over the past 35 years. Stars that were never in games like Austin Idol appear alongside modern-day stars like Nick Aldis, Jeff Cobb, and Zack Sabre Jr. who also make their gaming debut, but how well do modern acts fare with a gameplay style that harkens back to before some players’ births? 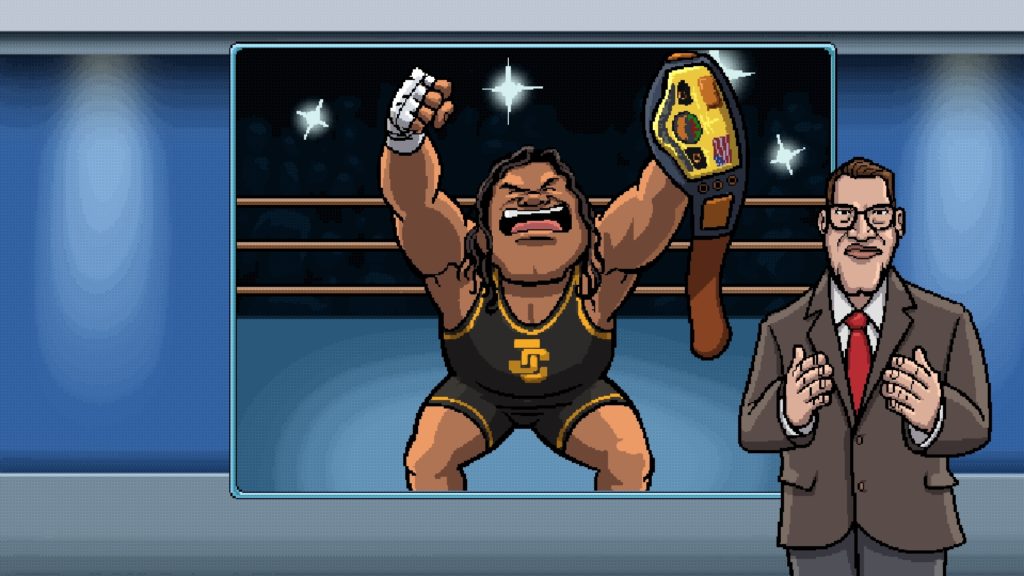 The answer is surprisingly well since RetroMania aims to be a proper sequel to WrestleFest and not just a copycat, so players wind up with a fast-paced game that aims to replicate the action of wrestling no matter what style the roster works. John Hennigan is the game’s resident speedster, and is perfect for sticking and moving. while Jeff Cobb is a great short-range bruiser and excels at tossing folks around with reckless abandon. ZSJ is also dangerous in longer bouts as his submission-heavy offense can get a quick tap-out win when everyone is at the end of their ropes and he’s a dangerous threat in tag team, triple threat, and fatal four way encounters for that very reason. Any interruption of a cover or submission attempt ends it, so having someone in a submission gives you a guaranteed win if no one is immediately around you and the victim’s health bar is completely depleted.

As an arcade-style game and one that literally has an arcade version available with iiRcade, it would be easy to mistake an easy to learn gameplay style with one lacking depth. However, RetroMania, like WrestleFest before it, comes with a surprising amount of depth under the hood. Beyond different styles resulting in a different feel to each match, the environment itself has a lot of life to it that helps make each part of the ring feel important. Similarly to how AKI’s best games in the N64 era used the ring as a tool, the same holds true here. The ring apron may be the hardest part of the ring, but it hasn’t been used as much as it could be in a lot of games. While 2K’s recent WWE efforts have allowed you to d a lot of moves onto the frame of the apron, no game has allowed you to have back and forth exchanges on the apron with grappling holds ever—until now.

RetroMania Wrestling allows you to do every grappling and running move you can do in the ring on the apron, and it freshens up matches in ways that never could have been imagined. This means that if you want to do John Hennigan’s diving spear on the apron and see the ring shake, you can. It’s so much fun to play as either Jeff Cobb or Animal and chuck people around on the apron with press slams, capture suplexes, and giant swings. It adds a lot of fun to multi-man matches and makes four ways even more chaotic since you can actually have all four people on the apron at once and just go back and forth from person to person tossing them around or trying to win by any means necessary. This one hypothetical gives the game a level of depth that no other game on the market has and it’s quite impressive.

Like WrestleFest before it, RetroMania is easy to learn with a simple control scheme that allows you to do short-range strikes, longer-range ones, and more powerful ones alongside similarly-powered grapples. As in an actual match, things build from lower-tier moves to higher-end ones, and so you have to rely on a few basic moves to then graduate to more flashy moves, like slams and suplexes before nailing bigger moves like power bombs and death valley drivers. The game features a grapple assist feature that lets you learn the timing of grapples in real-time with a green indicator letting you know when you can deliver a move and red letting you know that your timing is off. It’s a pretty fair system and it helps make the experience more user-friendly alongside difficulty sliders. There’s also a piece of visual feedback letting you know the best timing for things like reversals. 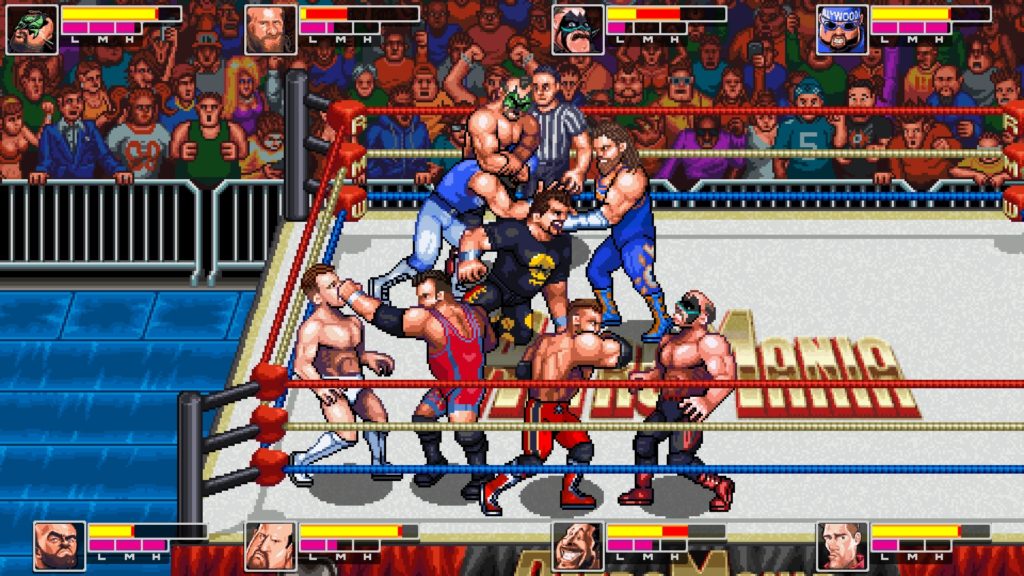 Proper timing is the key to winning the Retro Rumble, while the 10 Pounds of Gold tests your mettle with multi-man matches and then grueling cage bouts before pitting you in a 2-out-of-3 falls match with Nick Aldis for the title. Beating him is no easy feat, and seeing your chosen character have the legendary crown in both their winning celebration and when coming down the aisle to defend it is a nice touch that a lot of larger games haven’t featured. Story mode takes you through John Hennigan’s journey back to the top with him wanting to win the NWA Title, and players can choose to make him a friend to all woodland creatures or a bit of a jerk and it acts as a really fun tutorial that shows you the ropes and has a cute little narrative to drive things along and show off the games’ many arenas.

Fans of the Hammerstein Ballroom will be pleased to see a legally distinct venue there, while fans of beachfront brawl will like the Major Figures arena—complete with giant blue WWF action figure-style ring. The 2300 Arena is intact for House of Hardcore, complete with tribute banners for The Public Enemy alongside other ECW legends, while the NWA Powerrr studio harkens back to not only the past, but the present as well and this is the first time a studio setting has been placed into a video game. It really gives you a sense of just how intimate a setting that is for pro wrestling and the arena selection is just one area that indicates a lot of love went into the final product.

In terms of match selection, RetroMania offers a lot of versatility, with singles, tag teams, triple threats, and fatal four-ways available as one-fall and elimination matches. Cage matches are also an option, with either blue bars or the regular silver fencing. Players can choose to have count-outs or falls-count-anywhere stipulations, plus every match is no DQ.

The tag matches are as fun now as they were in WrestleFest, with lots of chaos, but also a healthy pace for a regular tag team match. Hopefully, the Rock ‘n’ Roll Express can be added in as a roster update later on to further give a beloved team a chance to shine in a video game. 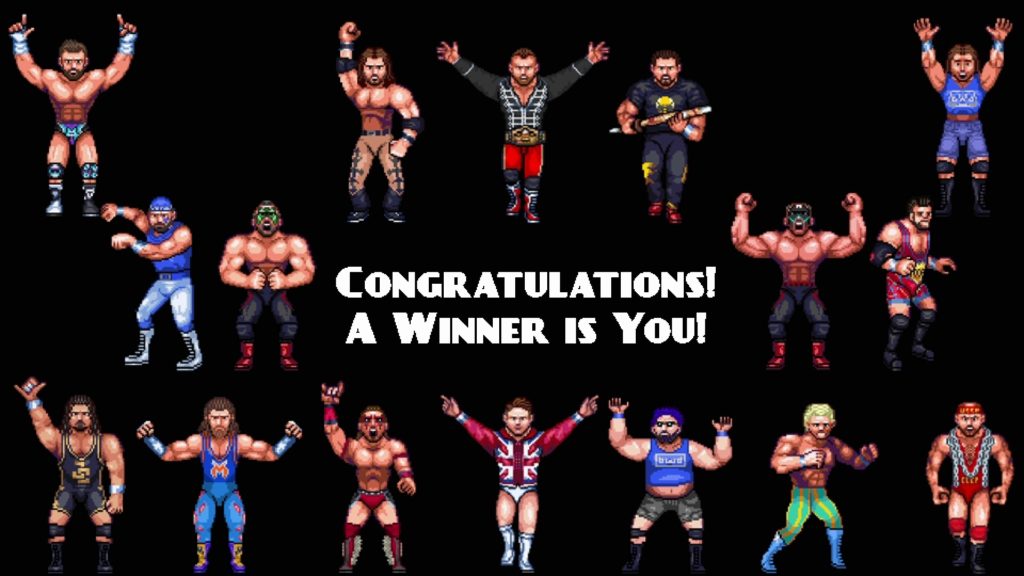 Retrosoft Studios did a fantastic job replicating the look and feel of WrestleFest while also modernizing it with more detailed artwork. Move animations are far more elaborate here, and things like Tour of the Islands have a flow to them that was lacking in most of WrestleFest‘s attacks – which featured few frames of animation to keep the action fast. They’ve found a nice mix between fluidity and speed while also keeping the proportions of the characters realistic when needed, but also goofy for the caricature style used for cutscenes throughout the story and 10 Pounds of Gold campaign.

Colt Cabana and Ian Riccaboni do a fantastic job with commentary, and like with other parts of the game, you can adjust the amount you hear them. WrestleFest had bare-bones moves-only commentary, but full-on commentary allows them to have some fun banter back and forth, and you get a real sense for what made them such a fun commentary team for ROH for so long. Having full-on commentary reminds me of playing WrestleFest in arcades with friends and just doing our own commentary over the action. Nick Aldis also plays himself here and having the roster voice themselves helps this feel more authentic than WrestleFest was, where you had people doing sometimes dreadful impressions of the real deal. You can say “dine on danger and snack on death,” but unless you’re Hawk, it just doesn’t work. The game’s  music is also pretty catchy, and it’s nice to be able to adjust its’ volume too, like during cage matches, it’s fun to just hear people smash into steel instead of having music drown it out.

RetroMania Wrestling is available now on Steam and will be coming soon to the Nintendo Switch, PlayStation 4, and Xbox One soon. The Nintendo Switch version will be playable in both portable and docked mode – and the fast-paced gameplay will be an absolute perfect fit on the Switch, which has had a less-than-stellar run of wrestling games so far. WWE 2K18 was a dumpster fire, and while WWE 2K Battlegrounds runs pretty well and has a better roster than RetroMania, it’s also nowhere near as fun to play. If you’re looking for an arcade-style wrestling game to sink your teeth into, look no further than RetroMania Wrestling. Even in its earliest days, it’s well-worth its $30 asking price, plus more free content, like James Storm, Chris Bey, and even Mr. Hughes will be coming down the line to add more value as unlockable players.