Chris Aiken has your Wednesday night preview for the AEW Dynamite and NXT shows, or the “Wednesday Night War.”

Tag team partnerships are part of the focus this week on the Wednesday night wrestling shows. The Elite reunite in AEW and Dusty Rhodes Tag Team Classic begins in NXT.

Here are the Wednesday night lineups:

AEW is following up night one of New Year’s Smash with another special edition of Dynamite on Wednesday. Along with a loaded lineup is the aftermath of a run-in and reunion. The Good Brothers (Karl Anderson & Doc Gallows) ran in during an angle that closed the previous episode. They joined their former Bullet Club cohorts from The Elite in getting the band back together.

The Elite team up again

The Young Bucks ran in during a beatdown on Jon Moxley at the hands of Kenny Omega and The Good Brothers. Instead of making a save, Nick & Matt Jackson aligned themselves with the Kenny Omega and the invaders. Don Callis has orchestrated (with his “Invisible Hand”) a Bullet Club reunion of sorts. The alliance was then sealed with a “too sweet” among the group.

The current AEW World Champion now seems to have a stable to help protect his reign. Already in his corner was Don Callis as the Bobby Heenan to his Nick Bockwinkel. Omega now has Horsemen to his Ric Flair. Likewise, the angle last week played almost like something from the New World Order. Such is wrestling. The episode last week nonetheless has fans buzzing after the cliffhanger ending to the show.

The Elite reunite as a team this week on Dynamite as Omega teams with The Young Bucks. So the World Champion is teaming with the AEW World Tag Team Champions. Will the Impact Tag Team Champions The Good Brothers play a factor?

Darby Allin defends the TNT Championship against Brian Cage of Team Taz. Allin continues his feud with Team Taz, but an ally has emerged to watch his back. That is the man called Sting.

Sting and Allin forming a partnership has been a slow burn. Partnering with Sting should do nothing but help in getting Allin over with the audience. Sting is an all-time legend who can mentor the rising star. They also both wear face paint. It is almost a story as old as time.

Serena Deeb returns to Dynamite when she defends her NWA Women’s World Championship against AEW wrestler Tay Conti. If this is not the biggest match in Conti’s career, the title bout tonight is at least her most high profile in AEW.

The “Road to” feature hyping the title match is worth checking out before watching tonight’s episode.

Dr. Britt Baker brings her new talk show segment to prime time after developing it on AEW Dark. The segment is Dr. Baker’s take on Piper’s Pit, which is a landmark segment made popular in the World Wrestling Federation.

Similar segments in Portland, and possibly other places, might have predated Piper’s Pit. Regardless, Roddy Piper in the mid-1980s popularized a type of talking segment that set a standard that was copied for decades to come.

The concept is basically a show within a show with a short talk show segment during a pro wrestling show. It has taken many forms since Piper’s Pit made the concept popular. WWE to this day still does segments from time-to-time based on the concept. Most recently Kevin Owens hosted The KO Show. Dynamite showcases their version of the concept.

The biggest edition yet of The Waiting Room requires its highest profile guest, and that is certainly the case tonight with Cody Rhodes as the guest of Dr. Baker. Of course, Dr. Baker will be joined as usual by her sidekick, Rebel (“Reba”).

Other matches and etc.

Additional bouts advertised for Dynamite includes a stipulation match with Chuck Taylor against Miro. If Taylor loses the match, he would then becomes Miro’s “young boy” until Beach Break.

PAC collides with Eddie Kingston in a grudge match in the making for several weeks. Also, Jurassic Express meets FTR in a tag team match. 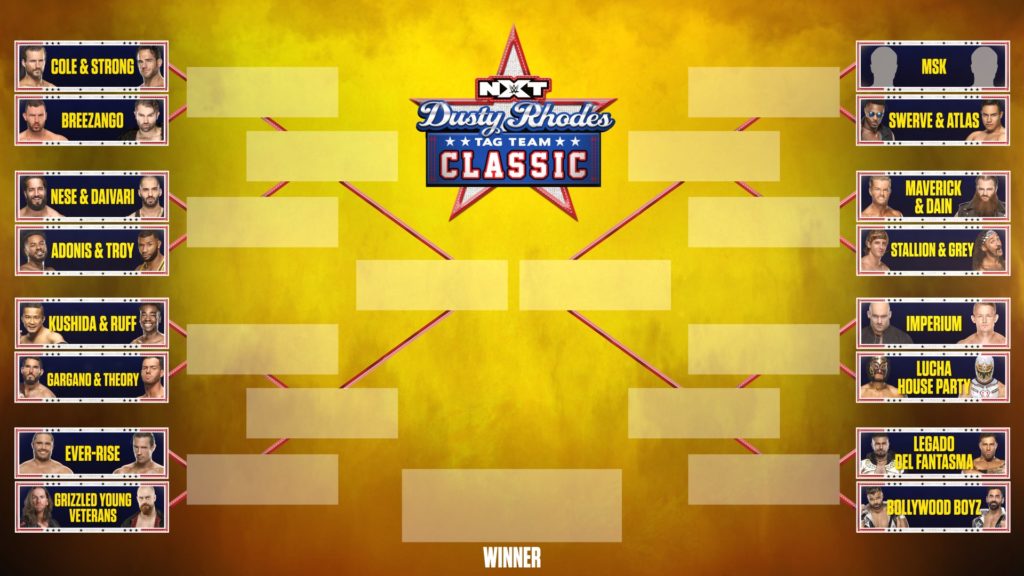 The Dusty Rhodes Tag Team Classic tournament kicks off this week on WWE’s black-and-gold brand. Some tournament bouts will apparently also take place on 205 Live. However, most of the important matches will likely happen in the NXT ring.

Notably announced last week was a women’s version of the Dusty Classic is coming soon.

The virtual fans seen on the video screens at the Capital Wrestling Center will be in real-time for the first time. Apparently, the footage of virtual fans was recycled from other WWE programming for the NXT show on Wednesdays. That changes this week with the virtual fans watching and reacting in real time.