Chris Aiken has your Wednesday night preview for the AEW Dynamite and NXT shows, the “Wednesday Night War.”

All Elite Wrestling and World Wrestling Entertainment go head-to-head again on this week. AEW presents a special supercard episode built up over several weeks. WWE produces a go-home show that finalizes the build towards a NXT supercard this weekend.

The flagship show for AEW airs on TNT starting at 8 p.m. ET from Daily’s Place amphitheater in Jacksonville, Fla.

Jon Moxley defends his AEW World title against challenger Kenny Omega in what is arguably the most anticipated match in the short history of Dynamite. The match-up could headline a pay-per-view, yet viewers are getting a treat with the championship bout airing for free on cable television.

The two met previously in a brutal encounter that closed the first Full Gear PPV in 2019. Embroiled in a heated feud at the time, Moxley and Omega collided in a “Lights Out” match. The gimmick being the bout was unsanctioned, so no holds barred. Their hardcore match featured plenty of ultra violence.

The narration in a Road To Winter Is Coming documentary described, “The battle at Full Gear wasn’t about a win or a loss. It was about two men looking into each other’s souls.”

Barbed wire, shattered glass, and other assorted weaponry were prevalent in the Lights Out brawl. That left them both battered and bloody. Whereas that match was more about being ultra violent, the focus of the bout on Wednesday is centered more on the championship. Safe to say the upcoming match will be vastly different in style and substance. Both of their paths since last year took them in different directions, but now their paths lead back to each other.

After the Lights Out match, both Moxley and Omega went on to capture championships. Moxley won the AEW World Championship from Chris Jericho in February 2020. Omega formed an old-couple tag team with Hangman Page, and they became AEW World Tag Team Champions after defeating SCU. Moxley has remained champion since winning his title, but Omega and Page lost the tag titles this past September to FTR.

Omega and Page’s partnership soon dissolved after they dropped the titles, and both found themselves in a tournament to decide a new number one contender for the World Championship. Omega went on to defeat his former partner, as he pinned Page in the tournament final. Winning the tournament realigned Omega’s path, and he meets up again with Moxley a year after their previous bout. This time the stakes are much higher.

Built around the title match, the special episode of Dynamite on Wednesday even has it own unique name. Dubbed Winter Is Coming, the episode is basically on the level of a supercard. Besides a championship on the line in the main event, a “Dynamite Diamond” ring is up for grabs in a battle royal as part of Winter Is Coming.

Many on the AEW roster rumble will be in the ring at the same time for this battle royal. The winner is awarded a 45-karat diamond ring, which they apparently hold for a year. MJF last year won the ring after winning the “Dynamite Dozen” battle royal. This year MJF is again in a battle royal for said ring, but there are more than a dozen others also in the ring.

Does MJF concede the ring if he fails to win the battle royal on Wednesday?

A former title-holder in a tag team grudge match teams with the wrestler that beat him for the championship. Cody Rhodes recently lost the TNT Championship to Darby Allin. Since then, Rhodes has become embroiled in a feud with Team Taz. That has led to an unlikely teammate in Allin.

Allin has previously feuded with Team Taz. More specifically, Allin and Ricky Starks became rivals earlier this year. Now Darby has a partner to combat the heel faction, as he teams with Rhodes to oppose Team Taz.

Part of the backstory heading into the tag match on Wednesday is Will Hobbs joining Team Taz. Now billed as Powerhouse Hobbs, he attacked Cody to turn heel. Hobbs is probably in the most high profile match of his career with the tag team grudge match. The bout is likely to determine his upcoming direction, which could possibly mean a feud with Rhodes.

In their first ever singles match against each other, Chris Jericho against Frankie Kazarian is also set for Dynamite. That match stems from a tag match last Wednesday, and it is a continuation of a new rivalry between The Inner Circle and SCU.

Kazarian knocked out MJF with a punch on the previous episode of Dynamite. Since MJF is now part of Inner Circle, him getting punched out by Kazarian angered Jericho. Thus, there is a match booked for Winter Is Coming.

Also announced for Winter Is Coming is match featuring the women’s division. Dr. Britt Baker faces up-and-comer Leyla Hirsch this Wednesday as part of the special episode of Dynamite. Likely in Dr. Baker’s corner is her second, Reba (or Rebel). She will probably be a fixture at ringside.

On the other channel, very little is announced so far.

The show from the black and gold brand of WWE airs on USA Network. WWE NXT starts at 8pm EST from the Capital Wrestling Center soundstage at the WWE Performance Center. The episode is the go-home show ahead of TakeOver: War Games, which takes place this Sunday.

So far as of this writing, the only match announced for Wednesday determines the advantage in the women’s WarGames match. Shotzi Blackheart against Raquel Gonzalez decides which team goes into WarGames this weekend with an advantage. 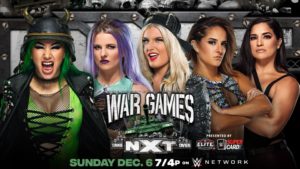 The heel team for the women’s WarGames match is set, but the babyface side still lacks a team member. Blackheart teams with Ember Moon and Rhea Ripley on the babyface team, and they should have fourth teammate. Maybe that person will be revealed Wednesday on WWE NXT.

The heel team for the Women’s WarGames match consists of Candice LeRae, Dakota Kai, Raquel Gonzalez, and Toni Storm. Storm turned on Moon during last week’s episode of WWE NXT, and Storm aligned with the heel team. The aftermath of that could likely play out Wednesday night on the next episode.

More is likely to be announced for Wednesday’s episode of WWE NXT. We will update the lineup after that happens so check back later for more.