Chris Aiken has your Wednesday night preview for the AEW Dynamite and NXT shows, the “Wednesday Night War.”

Both of the head-to-head wrestling shows on Wednesday are coming off a supercard. NXT TakeOver was just days ago, and AEW last week aired one of the most important episodes in its short history with Winter Is Coming. AEW has also scheduled a wrestling legend and a mainstream celebrity to appear in the follow-up to last Wednesday’s Dynamite. We will also see new whether AEW World champion Kenny Omega is making an impact or not—pun intended.

Below are the lineups announced so far. We should know more on Wednesday night when WWE and AEW once again go head-t0-head.

This is Sting! The wrestling legend returned last week to TNT. He last appeared on the cable channel in 2001 on the final broadcast of WCW Monday Nitro.

Sting last week debuted in AEW as surprise in an exciting angle during Winter Is Coming. His presence means so much that he created a buzz without uttering a word. Sting is back on Dynamite this week, and this time he is set to speak.

Advertised for Dynamite on Wednesday is Tony Schiavone interviewing Sting. The two reunite on camera after years of appearing alongside each other on WCW programming.

Sting reportedly inked a deal with AEW, so he will apparently have a recurring role of some sort on the promotion’s television shows. Sting last had a run as a special attraction in WWE. That went okay in some regards, but he clearly has more to offer.

Is Shaq All Elite? 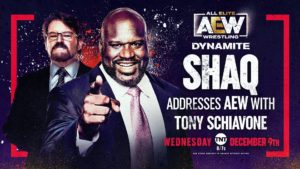 Schiavone is also interviewing another notable star on the show: Basketball legend Shaquille O’Neal is set to appear on Dynamite this Wednesday. Shaq will address AEW in an interview conducted by Schiavone.

Cody Rhodes will likely be involved in the segment with Shaq, either in person or the subject matter of the interview. Rhodes several weeks ago was interrupted by Jade Cargill, who was making her AEW debut. She confronted Cody, and she namedropped Shaq while doing so.

If Cargill is involved in the segment on Dynamite, that could bring out Brandi Rhodes to confront her. Brandi, in probably the best promo of her wrestling career, berated Cargill after she debuted on a previous episode confronting Brandi’s husband.

The power couple of Brandi and Cody Rhodes appear to be on one side, while Shaq and Cargill could oppose them. Whatever this feud is leading to might become more clear after Shaq’s appearance on Wednesday.

Kenny Omega in the main event of Winter Is Coming won the AEW World Championship. He defeated Jon Moxley to win the title after shenanigans from Impact Wrestling executive Don Callis.

Callis vowed that Omega would bring the title to Impact. Omega went on to appear on the show Tuesday night, where he and Callis were interviewed by Josh Mathews on Omega’s new tour bus. On camera they changed the nameplate on the championship belt, officially putting Omega’s name on the AEW title.

Omega seems to be a full-fledged heel, and Callis is the Bobby Heenan to his Nick Bockwinkel. Maybe a better description of Omega might be Bockwinkel meets Thanos. Omega wants conquer more. He hinted at wanting to become a belt collector, and Callis noted that Impact has a lot of titles.

Adding to an already loaded lineup for Dynamite, Omega said he has a “big announcement” on Wednesday. Lex Luger is a hint, and Omega already has the bus. Regardless, Omega rolls into Daily’s Place as the new AEW World Champion.

Omega was not the only person from AEW to appear on Impact.

Tony Schiavone is not only part of two major interview segments on Dynamite, he appeared alongside Tony Khan in what was billed as a “paid announcement” during Impact.

Khan said he could have blocked Omega from appearing on Impact, but a condescending Khan went on to say the appearance might help the budget and bottom line for Impact Wrestling. The implication is they could use the help.

Speaking to Callis, Khan personally invited him to Dynamite. Khan said he was looking forward to Omega being on the show.

Spoofing the old Mid-Atlantic studio wrestling show, Tony and Tony further plugged their show on Wednesday. They offered some more backhanded compliments aimed at Impact Wrestling. Some were not even compliments at all.

Khan mentioned a rumor he was buying Impact Wrestling. He jokingly asked Schiavone if he ever worked for there. “Once. Then I quit the business for 18 years,” Schiavone said in a deadpan remark.

Chris Jericho has an ultimatum for The Inner Circle this Wednesday on Dynamite. Tension rose within the group since MJF and Wardlow joined the faction. That tension may boil over as the future of the group is seemingly at stake.

MJF is not only a part of the ultimatum segment, he also has a match.

Orange Cassidy against MJF will decide who gets possession of the Dynamite Diamond. MJF last year won the diamond ring, and he has a chance to repeat. He and Cassidy were the final two in a battle royal last week on Dynamite. That leads to them in a one-on-one match with the ring at stake.

While the bout is a singles match, Wardlow is usually in MJF’s corner. He could play a part in the match, as could the Inner Circle.

Other bouts set for Wednesday include the AEW World Tag Team Champions in a non-title match. Although the titles are not at stake, a future shot at challenging for the belts is on the line. If the team of Jack Evans and Angelico can defeat Matt and Nick Jackson, they will earn a title shot against the champions.

Abadon returns to the ring for a match on Dynamite. She continues to haunt AEW Women’s Champion Hikaru Shida.

The Lucha Brothers team with Lance Archer against a trio from The Family, which is Eddie Kingston, The Butcher, and The Blade.

The next episode of WWE NXT follows a TakeOver supercard that featured two versions of WarGames. The aftermath of those matches, and other bouts from TakeOver, is a likely focus on the show this Wednesday.

Undisputed Era won the men’s WarGames match over Pat McAfee’s team. The longtime faction in NXT showed their prowess, and they thwarted the new group led by McAfee.

Proving to be ever the worker, McAfee even wore a neck brace while doing his talk show a day after the War Games match. He was selling the WarGames match almost better than anyone. The exception to that might be the ones that were actually injured on the TakeOver supercard.

The heel team, captained by Candice LeRae, won the women’s War Games match. In the process, LeRae suffered an injury that possibly left her with a broken bone in her hand. She nonetheless was victorious, and so was her husband.

Johnny Gargano regained the NXT North American Championship in a triple threat match. He had help from the character in the Scream mask. That person was revealed to be Austin Theory. So now, Theory joins Indi Hartwell in what seems like a new faction led by LeRae & Gargano.

Announced for this week is a “special look at the casualties of WarGames.”

NXT Champion Finn Balor Is Back

For weeks, the reigning NXT Champion has not been a featured on the black and gold brand. Finn Balor still holds the title, though he had to recover from an injury. With the that and the build to WarGames matches, the NXT champion had to take a proverbial back seat. Balor is back this Wednesday, where he might reveal who his next challenger will be.

Balor will kick off the show.

Karrion Kross is soon returning to television. An injury not only forced him out this past summer, but Kross also had to forfeit the NXT Championship. Balor sat out, but he was not stripped of the title. Could this lead to a prospective feud between Kross and Balor?

The day of the show two matches were announced for the episode. Ember Moon meets Raquel Gonzalez in a singles match in the aftermath of WarGames. Also, Cameron Grimes collides with Tommaso Ciampa.