Chris Aiken has your Wednesday night preview for the AEW Dynamite and NXT shows, or the “Wednesday Night War.”

‘Twas the night before Christmas Eve, and holiday themes highlight the two Wednesday night wrestling shows. AEW presents a show called “Holiday Bash,” while something titled “A Very Gargano Christmas” will be featured on NXT.

One similarity this week is that both shows offer tag team title matches as main events. One major difference is that they won’t air head-to-head. NXT will be in its usual time slot on USA Network, but Dynamite airs immediately following NBA on TNT.

All Elite Wrestling has a loaded show, even if Dynamite is airing at a later time than normal. It remains a time to celebrate as a festive theme is prevalent on an episode dubbed “Holiday Bash.”

Besides the featured matches on the show, the show this week should also help to built interest for a set of shows. In two weeks begins the “New Year’s Smash.”

The Young Bucks defend their AEW World Tag Team Championship against the Acclaimed on Wednesday. In a bit of irony, the young challengers collide with an acclaimed team of veteran wrestlers.

Nick & Matt Jackson are defending their titles from challengers Anthony Bowens & Max Caster. The bout is most likely the highest profile match so far in the career of the Acclaimed. They are a rising team in AEW, but now they face the very team that helped found the promotion itself. 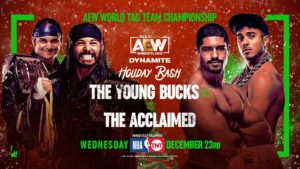 Aside from the tag title match, more bouts on Dynamite feature other teams. That includes an Inner Circle pairing when Chris Jericho teams with MJF. They meet the team of Top Flight, who are Darius & Dante Martin.

Even more tag action on Dynamite is included in a trios bout. The six-man tag match pits Jurassic Express against Dark Order.

Sting returns again on Wednesday night for yet another appearance on Dynamite. He is advertised for an interview with Tony Schiavone, which are becoming a common pairing in the own right. It almost makes Wednesday evening feel like a Saturday night on the Mothership from back in the day.

The debut of Sting created quite a buzz. Maybe it is the snow that falls during his entrance, but Sting in AEW has somewhat cooled off. Nonetheless, the new has still yet to wear away. Sting also has a very charismatic persona. That helps to keep him hot during the slow burn, no matter how much he seemingly cools.

Sting always retains a level of cool many on the roster might lack. His reputation precedes him, but that will only go so far. He needs a defined direction. Maybe that path to a storyline becomes more clear on Wednesday night.

“Best Man” Miro last week announced that Kip Sabian and Penelope Ford have an announcement of their own for this week. The engaged duo reveal the date of their wedding day. Weddings taking place on a wrestling show are known for two things—ratings and chaos. The nuptials could possibly generate both for AEW.

Dynamite this week not only has tag teams and happy couples, there are also singles matches. One of those bouts has “The Bastard” taking on the Butcher as PAC is back in singles action. He wrestles one of Eddie Kingston’s charges, which continues an ongoing feud.

Dustin Rhodes is continuing his feud with Dark Order. He faces Evil Uno in a match that took several weeks to come together.  In other singles action, AEW Women’s Champion Hikaru Shida competes against an opponent that is yet to be named.

AEW Dynamite airs on TNT immediately following the NBA game between the Boston Celtics and the Milwaukee Bucks.

WWE’s black-and-gold brand isn’t entirely holiday-centric like AEW’s Holiday Bash, but it still offers a bit of a holiday spirit this Wednesday night. It isn’t New Japan, so viewers shouldn’t be dreaming of a (Jay) White Christmas, but it’s still a wonderful life.

The show this Wednesday is basically a go-home episode ahead of New Year’s Evil. NXT will air unopposed in most of the US, a prime-time opportunity to plug NXT’s supercard next week.

Gargano & LeRae, who recently became leaders of a new faction, The Way, come into Wednesday’s show with a “holiday celebration.” It’s actually more of a celebration for Gargano, who recently won the NXT North American Championship.

The NXT tag team champions will put their titles on the line in a street fight against an odd couple team of Drake Maverick & Killian Dain. Dain & Maverick are out for revenge after getting beaten up on a previous episode, brawling with the champs last week. Also, Breezango was part of last week’s brawl, so those characters could easily be woven into this match; a triple threat match with all three teams does make more sense based on the ending to last week’s episode.

Looking ahead to New Year’s Evil

NXT Champion Finn Balor and his challenger for next week, Kyle O’Reilly, will face off in a segment, as well. The two will face each other for the title next Wednesday at New Year’s Evil

They had an outstanding match that headlined a TakeOver card in October. The encounter left both with injuries. O’Reilly has returned to the ring, but Balor hasn’t wrestled since then.

Bronson Reed returns to the ring. It will mark his first bout on the show in quite some time. He seems to be getting a renewed push, or at least his return itself is getting a push.

Also announced for this week is Jake Atlas and Isaiah “Swerve” Scott in a return bout from a few weeks ago. Atlas previously defeated Scott, but Scott refused a handshake after the match. Scott is teasing a heel turn— a “swerve” on NXT? Pun intended.

Rhea Ripley against Dakota Kai is a late addition for Wednesday’s episode. Announced the day before the show is set to air, the bout between Ripley and Kai is a rematch between the two. Kai previously defeated Ripley earlier this summer thanks to outside interference.

With Ripley getting a renewed push recently, the outcome could likely be different this time around. However, outside interference could still play a part in the match. The bout is an extension of the feud between Ripley and Raquel Gonzalez.

Ripley in character tweeted, “Might as well put [Raquel Gonzalez] on the graphic too. Everyone knows [Dakota Kai] can’t fight her own battles.”

Might as well put @RaquelWWE on that graphic too. Everyone knows @DakotaKai_WWE can’t fight her own battles… 🙄 pic.twitter.com/OHBaI7aMtw