This is Parker Klyn’s first article for Fight Game Media. In the first of many AEW Dynamite recaps, Parker breaks down a milestone show. Winter is coming? Winter is here.

All Elite Wrestling presented their Winter is Coming special on this week’s Dynamite, billing the Moxley vs. Omega main event as “biggest match in Dynamite history.” Today, I looked at what went well and what could have gone better for this newsworthy Wednesday episode.

Jon Moxley vs. Kenny Omega: As a pure wrestling match

Between the ropes, Moxley and Omega’s AEW World Championship match was as good a match you’ll see on television. They were patient, having to last nearly a half hour through two commercial breaks, but the match itself was never slow.

The action frequently switched up between hard-hitting strong style and classic brawling. There were a half-dozen memorable moments throughout this, including Omega’s consistent dismantling of Moxley’s knee, Moxley’s dive being cut off with a V-Trigger, Omega busting Moxley open with a microphone, and their fantastic seated striking battle. Don Callis also provided great levity in the broadcast booth as Omega’s personal commentator. (Editor’s note: Callis functions as a regular Bobby “The Brain” Heenan here, just as he did at the Tokyo Dome for Jericho.)

These two had sky-high expectations coming in, and they easily met those expectations with the rare television main event that felt like a major, must-see fight.

Few wrestlers have a more inextricable association with wrestling on TNT than the former WCW and IMPACT legend Sting. So when the lights went out and the Crow arrived, face paint applied and baseball bat in hand, it was an extremely newsworthy moment.

Sting’s late career WWE run, while not perfect, was rather limited in length, and it’s been over five years since Sting appeared on a wrestling television show in a regular capacity, meaning he’s maintained his unique superstar aura.

Sting’s plans are yet to be revealed. Last night, he stared down both Cody Rhodes and Arn Anderson, then lingered a long time in the corner eyeballing Darby Allin, a fellow face-painter who has garnered comparisons to the Stinger himself. Regardless, Sting will speak for the first time on next week’s Dynamite, so we should get an answer soon.

A common criticism of AEW is their lack of focus on a women’s division. While I agree that their booking is sometimes suspect (or non-existent, in the case of Hikaru Shida vs. Nyla Rose ahead of the recent Full Gear pay-per-view), the reality is that they rely far more on foreign talent, like Riho and Tokyo Joshi Pro wrestlers, than other companies.

With a depleted women’s roster, many have looked to Anna Jay as potentially the division’s next star. However, if I were booking, I’d be pushing Leyla Hirsch above just about anyone else. In every single appearance she’s made, whether on Dynamite or Dark, she either matched her opponent move-for-move, like in the Shida and Serena Deeb matches, or flat-out outworked her opponent, as she did tonight with Baker.

Everything Hirsch does in the ring, from her legitimate amateur wrestling chops to her stiff strikes to her surprising flying ability, it all looks impressive. She’s clearly a step above most of the rest of the division. If she keeps having performances like this, AEW will have no choice but to elevate her.

After little over a year in existence, AEW has earned the benefit of the doubt among fans with their booking so far. Just about every one of their major storylines resolve themselves in natural, satisfying ways.

Tuesdays are the new Wednesdays! https://t.co/hGkDmkDOMS

With that said, I have absolutely no idea where this story leads to. Omega and Callis escaping through the back exit with the AEW World Championship with Tony Khan barking at them along the way, was one of the most newsworthy angles in recent wrestling history. AEW has  little to gain from a specific working relationship with IMPACT; if they wanted IMPACT’s talent, they would have signed them already.

Maybe it’s that invasion angles are inherently hot television. We know how the nWo and the WWF/WCW/ECW invasion all drew major ratings, but having your brand new World Champion, your top guy in the company, appear on IMPACT, a show that gets less than 20% of Dynamite‘s viewership, that’s baffling to me. Until this story plays out, I can’t call it a failure, but it looks to be an uphill battle from here.

It’s hard to kick off a non-title program. In the real world, as well as other combat sports, people don’t just fight each other for no reason. But AEW is getting a little rudimentary with how they start their feuds.

Sky and Spears have been at odds for months now, with most of their interaction appearing on Dark. Their disagreements started all the way back on September 23, on the Late Night Dynamite special, when Sky (inexplicably) saved Matt Sydal from an (inexplicable) beatdown at the hands of Spears. There was no real reason for the beatdown or Sky deciding to save Sydal. It just happened out of nowhere, and yet their feud was a major part of the Dynamite Diamond Battle royal.

Baker still hasn’t given us a reason why she distracted Thunder Rosa in Rosa’s championship match a couple weeks ago. So when Rosa responded with a beatdown on tonight’s show, getting fully invested in their story was difficult.

With some more creativity in building mid-card feuds, AEW could really round out Dynamite as a full-fledged show. 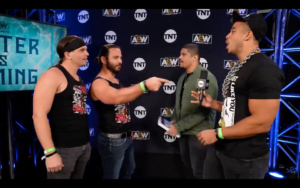 The newly-signed team of Anthony Bowens and Max Caster has won consistently on Dark recently. While they display unique athletic talent, their gimmick is one of the most grating I’ve seen in AEW.

Before matches, Caster grabs a microphone and taunts their opponents through rapping. It’s a reference to John Cena’s Thuganomics gimmick, made clear tonight when Caster wore a chain around his neck. It’s also horribly annoying, and not in a good way.

Heel heat should give viewers a desire to tune in and see the heel get his comeuppance. That type of heat is positive, entertaining, and good for business. While I still think The Acclaimed can deploy their smarmy, self-important attitudes in a good way, the rapping, unfortunately, doesn’t do it for me, and I feel it comes across as change-the-channel heat.