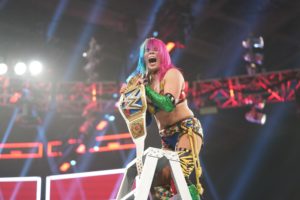 They say every cloud has its silver lining, but there has been no greater cloud over the wrestling or professional grappling landscape in 2020 than the COVID-19 pandemic. In fact, I think I’ve been unable to avoid mentioning it—unlike WWE—in every column I’ve written for Fight Game Media. In what is probably a grand understatement, the pandemic lockdown likely derailed almost everything the company had planned going forward following WrestleMania 36, which itself was presented in a radically different, two-night, no crowd, cinematic approach from the WWE Performance center instead of a huge football arena with a pirate ship in it.

The biggest shakeup happened at the top of the recently rebuilt women’s division. After a long history of starts and stops with promoting women’s wrestling, WWE had finally gone all in, acquiring MMA superstar Ronda Rousey as an in-ring competitor. Rousey was a proven draw on the Pay-Per-View market and one of the biggest combat sports athletes in history, male or female. This would ultimately lead to the first women’s match headlining a Wrestlemania, with Ronda Rousey, Charlotte Flair, and Becky Lynch making history following a marathon show.

And with that, the division was set for years to come, right?

Flash-forward 18 months and we have a drastically different landscape. Ronda Rousey has not been seen in WWE since losing her Raw Women’s Championship that night in New Jersey. Charlotte Flair, who lost her Smackdown Women’s Championship in the winner-take-all triple threat, stuck around long enough to smush up-and-comer Rhea Ripley in front of no fans at WrestleMania 36 but has made herself scarce for the majority of the post-crowd era. That evening’s big double championship winner, Becky Lynch, surprised literally everyone by vacating her title back in May and announcing her intentions to start a family with her fiance, Seth Rollins.

Just like that, WWE’s three main players in from their highly touted Women’s Revolution were now unavailable. Who was left to pick up the pieces?

The answer of course, simply, was Asuka. 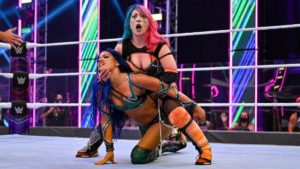 Considered an afterthought on the grand WrestleMania 35 card, Asuka was beaten by Charlotte Flair for her championship in the weeks leading up to the show to add a bit more gravitas to the upcoming main event. Whether it was the right call or not, it left Asuka with nothing to do beyond the new Token Midcarder Battle Royals they’ve been having to make sure more people make the card. What’s worse, Asuka didn’t even win despite being the biggest fish in the pond.

When 2020 began, Asuka was one half of the WWE Women’s tag team champions teaming with adorable pirate Kairi Sane as the Kabuki Warriors. The partnership was a great way to make sure both performers were regularly featured and allowed Asuka to lean into her extremely goofy heel side. They would hold the belts until WrestleMania 36, where they lost to Alexa Bliss and Nikki Cross.

The next month would be the annual Money in the Bank event, which due to the creative booking in the pandemic era, would take place within actual Titan Towers. The match literally took place in the WWE corporate headquarters, where it was filmed cinematically and both saw the men’s and women’s matches take place concurrently. Despite two-time MITB winner Carmella, rising star Shayna Baszler, and uh, Dana Brooke among others, Asuka was the one to grab the briefcase and secure a shot at the championship sometime in the future.

Or so we thought! The next night on Raw, in the very same shocking moment I mentioned earlier, Becky Lynch revealed she was leaving to start a family and that Asuka had won the Raw Women’s Championship in the match after Lynch quietly vacated the title. We had a new champ, with whom the title has (mostly) remained for the rest of the year. In fact, Asuka has held a title of some kind in 2020 for 245 of the 308 days that have occurred as of writing this. If she holds the title for the rest of the year, it would potentially be 302/365 days as some form of champion in WWE.

When WWE was left with nothing, Asuka picked up the ball and ran with it.

Asuka would briefly lose the title to Sasha Banks the night after Xtreme Rules: The Horror Show due to some absolutely brutal booking and storyline bollocks surrounding the brewing Sasha Banks/Bayley feud. Asuka would not stay down for long, qualifying for a rematch with Banks for SummerSlam by defeating Bayley, but also qualifying to challenge Bayley for her Smackdown title on the very same night after winning a battle royal. While she would fall short of the double championship, Asuka did regain her Raw Women’s title, where the title has remained as of writing this.

It sounds silly to say, but Asuka just yelling in her native Japanese and acting like she hammered a whole case of Red Bull every time she was on camera was remarkably compelling. She was entertaining on commentary, despite rarely speaking any English. She was just a dancing ball of manic energy with green slime eye shadow that can kick you to death. That she was the challenger to both major women’s championships on the second biggest show of the year might be more of an indictment of the roster as a whole, it also bodes well for the level of confidence they have in her as a performer.

When WWE was left with nothing, Asuka picked up the ball and ran with it. She’s done her part to combat WWE’s biggest problem of running the same matches month after month, having worked programs with Sasha Banks, Bayley, Zelina Vega, and Nia Jax over the course of her title She was waiting behind the Break in Case of Emergency glass and hit the ground running when her time came. I hate to say it, but once the bigger stars end up returning, I feel like Asuka will go back down the card. I think she has more than earned the right to take her place alongside Becky Lynch and Charlotte when they return. We can only wait and see.

For now, Asuka is shining. Enjoy the silver lining.