The head-to-head contest to wrestle away viewer’s attention continues on the eve of American Thanksgiving. AEW Dynamite (airing on TNT) and WWE NXT (on USA Network) both start at 8pm EST tonight.

As per usual, AEW has advertised far more ahead of time for Dynamite than WWE did for NXT. Just today, hours, mere hours before the show airs, more matches were finally announced for NXT. Of the two matches announced for the black and gold brand, the participants in one match are mystery opponents from warring factions; as of today, they’ve announced one participant, but not the other. In contrast, AEW has announced six matches for Dynamite. Of those six bouts, only one match has an unnamed opponent, yet that bout is a clearly a showcase match. 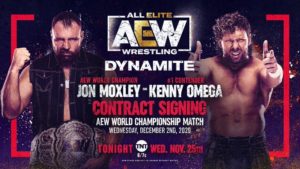 Ahead of the AEW World Championship bout next week on Dynamite, champion Jon Moxley and challenger Kenny Omega meet tonight face-to-face for to sign their contracts. Technically, Omega signed his name to the contract on the previous episode of Dynamite.

Moxley was unable to sign the document after being attacked by an unknown assailant last week. Tonight on Dynamite is a do-over, and this is basically the go-home episode before their title match next week. 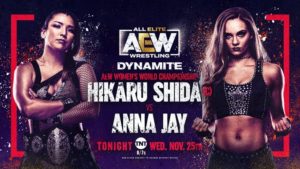 A title match is part of the card for Dynamite with AEW Women’s Champion Hikaru Shida defending her title against challenger Anna Jay. Jay’s Dark Order could factor into the match. 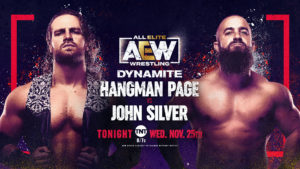 Dark Order has also greatly improved since being introduced on Dynamite. A recent breakout star in the group is John Silver. After stealing the show on episodes of Being the Elite, Silver is now featured more on Dynamite and AEW Dark. The match against Page will give Silver his most exposure so far on TV.

Page and Silver are both coming off a loss in single’s matches at the last pay-per-view. Their characters might have that in common, but the direction of their characters afterwards are vastly different.

Silver is still a vibrant character full of life. His excitement is practically contagious. On the other hand is Page, who is a down on his luck cowboy in the pages of a melodramatic Western novel. Can Page bounce back in a match tonight against Silver? 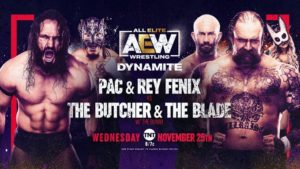 The Death Triangle reunited last week on Dynamite. Before that, PAC recently returned to confront Eddie Kingston. With PAC gone, Kingston had recruited The Lucha Brothers into his emerging stable alongside Butcher & Blade. Allegiances were tested with the return of PAC.

Lucha Brothers rejoined PAC to reform The Death Triangle after an angle on the last episode. This week, Rey Fenix teams with PAC to face Kingston’s charges in what AEW is billing as a tag team grudge match. Though that’s not the only featured tag bout set for the show. 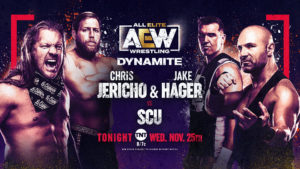 Jericho and Daniels meet on opposing sides for the first time in their lengthy careers as The Inner Circle collides with SCU. Billed as having a combined 58 years in the wrestling business, Daniels and Jericho have their first match against each other tonight on Dynamite.

Jericho & Hager months ago declared their intentions to climb the ladder in the tag team division. This could be another step on that path. In their way this week is a storied team with one of the longest tenures in the young history of AEW. SCU also had a long history before the formation of the promotion. While Jericho & Hager are a new team, Daniels & Kazarian have been teammates for years.

Other Matches Set For Dynamite

Another tag match announced for Dynamite pits a new team in AEW against a team that has yet to get prominent television time on TNT. The newest members of the AEW roster, Top Flight, faces TH2 (or The Hybrid 2). A partnership between Angelico and Jack Evans, TH2 is a high flying tag team that is due of an opportunity to shine. TH2 took matters into their own hands last week by attacking Top Flight. The newcomers are looking for revenge this week.

Will Hobbs is also set for action against an unnamed opponent. Likely against enhancement talent, Hobbs finds himself in his first showcase match since joining Team Taz.

The black and gold brand only announced two matches for WWE NXT until the day of the show. This afternoon more was announced, including one opponent in the ladder match. With that match, the build continues towards TakeOver: WarGames.

Pete Dunne just this afternoon was announced as the representative of McAfee’s stable. The member of Undisputed Era has yet to be named. 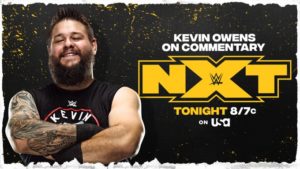 Wade Barrett said last week he would not be on the show tonight, but he also announced his replacement for the night. Kevin Owens returns to the NXT brand as guest commentator for tonight’s episode of WWE NXT. 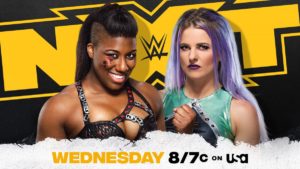 A match between Moon and LeRae stems from a sneak attack last week by LeRae & Indi Hartwell. That led to Moon and her tag partner last week, Toni Storm, getting laid out by Dakota Kai & Raquel Gonzalez.

The intermingling of feuds seems to indicate the formation of a WarGames team. Although not yet announced, the women’s WarGames match looks to further take shape tonight on WWE NXT.

After an unsuccessful title challenge, Rhea Ripley has something to say, as she plans to address the audience tonight. Her speech is a late addition to the show, or at least a late announcement advertising the segment.

Kushida against Timothy Thatcher is also a late addition to the show. Those two meet tonight in a match.