Hello, fight fans, and welcome to this week’s edition of the Monday MMA Round-Up, where we look back at all of the news of the past week in the world of MMA and look ahead to the upcoming week. Let’s get this thing going.

Looking Back At The Week That Was

Here are the fights I would make for some of the fighters who fought at UFC On ESPN+ 40 on Saturday:

Here are some notable fight announcements from this past week:

Here are some notable events coming up this week: 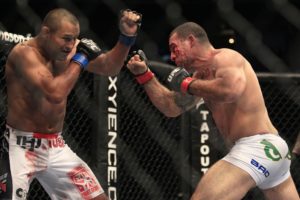 UFC 139 was taking place in San Jose, California, and was an action-packed event that was capped off by the all-time classic fight between Dan Henderson and Mauricio ‘Shogun’ Rua, which is in the argument for the greatest fight in UFC history. It was an incredible five-round fight that went back-and-forth won by Henderson via unanimous decision. It has already been inducted into the Fight Wing of the UFC Hall Of Fame and won the Fight Of The Year award in the Wrestling Observer Newsletter Awards.

Meanwhile, in Florida at the Seminole Hard Rock Hotel and Casino, Bellator had what many consider to be the greatest fight in the history of Bellator as Eddie Alvarez and Michael Chandler met for the first time in an all-time classic. It was a violent back-and-forth fight as well that saw Chandler submit Alvarez in the fourth round to become the new Bellator Lightweight Champion. It finished third in the Wrestling Observer Newsletter Awards for Fight Of The Year.

You can watch UFC 139 on UFC Fight Pass here.

You can watch the Eddie Alvarez vs. Michael Chandler fight below: