Hello, fight fans, and welcome to this week’s edition of the Monday MMA Round-Up, where we look back at everything that has happened in the last week in the world of mixed martial arts. There was a lot going on as the MMA world heads into a holiday week, so let’s dive right in.

Here are fights I would make for some of the fighters who competed at UFC 255 on Saturday:

Here are some notable fight announcements from the past week (NOTE: all fights listed aren’t necessarily official, but have been reported):

For the boxing crowd, the big fight between Mike Tyson and Roy Jones Jr. also takes place on Saturday. 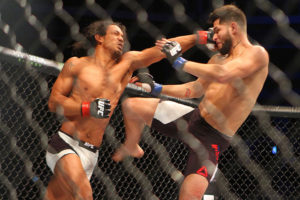 On November 28, 2015, the Octagon was set up in South Korea for the very first time as UFC Fight Night 79 took place in Seoul. The debut of the UFC in the country drew a sellout crowd of 12,156 fans.

In the main event, Benson Henderson competed for the final time in the UFC, scoring a close split decision win over future superstar Jorge Masvidal on scorecards of 47-48, 48-47 and 49-46. It was a close and competitive fight. Henderson wasn’t the only fighter competing in the final UFC fight of their career on the show, as Yoshihiro Akiyama also fought inside the Octagon for the final time, dropping a split decision to Alberto Mina.

The show is also infamous for the alleged attempt to fix the fight between Tae Hyun Bang and Leo Kuntz, which Bang was going to lose before changing his mind at the last moment and deciding not to go through with it, and he ended up winning a split decision. Bang was sentenced to ten months in prison for his role in the alleged attempt to fix the fight.

You can watch this event on UFC Fight Pass here.