Looking Back At The Week That Was

Here are some fights I would make for some of the fighters who competed at UFC On ESPN+ 39 on Saturday:

Here are some notable fights that were announced this past week: 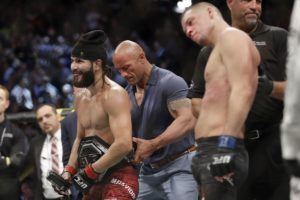 In the main event, Jorge Masvidal scored a third-round TKO win over Nate Diaz to win the BMF Championship, which was presented to him by Dwayne “The Rock” Johnson. Masvidal was in complete control of the fight and cut Diaz open, which caused the doctors to stop the fight at the end of the third round. The win catapulted Masvidal into one of the biggest stars currently on the UFC roster.