Where To Watch: NJPW World 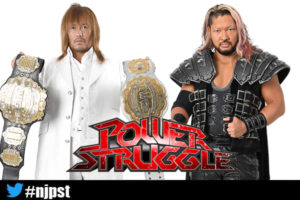 What is often referred to as the “Double Championship” is on the line in the main event of Power Struggle. Tetsuya Naito defends his two titles against his latest arch nemesis and challenger, EVIL. Their feud has spanned much of the year, with mixed results. They traded the titles this past summer, and now they meet again in a championship bout.

EVIL defeated Naito at Dominion in July to capture the championships. Naito in August regained the belts after beating EVIL at Summer Struggle in Jingu. EVIL in a non-title match scored a win over Naito during the G1 tournament.

Naito suffered greatly during the most recent series of shows dubbed Road To Power Struggle. EVIL left Naito laying on several occasions in the aftermath of recent tag team matches. Forgoing wins in those tag matches, EVIL instead looked to punish Naito ahead of their title match. Even when Naito scored a pinfall on Yujiro Takahashi to win a tag match, the champ left the ring bleeding after another encounter with EVIL.

Their feud has always been about more than the Double Championship, but the quest for the titles is nonetheless a large part of the rivalry. The IWGP Heavyweight Championship for decades has been the top prize in NJPW, and now that includes the IWGP Intercontinental Championship with Naito holding both belts.

The honor of challenging for the top singles title at the biggest show of the year is also a sought after prize, and the semi-main event at Power Struggle determines who as the right to challenge for the Double Championship. 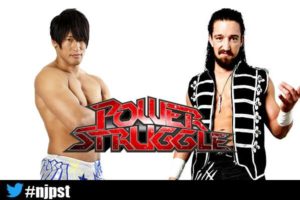 The 2020 G1 tournament winner puts his right to challenge up for grabs against a runner-up that claims he instead should possess that right. Jay White came up short despite a great run in the tournament. “Switchblade” wasted no time in challenging Kota Ibushi on the same night the “Golden Star” won the right to challenge for the Double Championship.

White defeated Ibushi in a G1 tournament match, but Ibushi still went on to become the overall winner in G1. Ibushi acknowledges White has a victory over him, but he is determined to advance towards the Tokyo Dome. The winner at Power Struggle is likely to challenge for the Double Championship on one of two nights at Wrestle Kingdom in Tokyo Dome.

White against Ibushi is not the only bout with a right to challenge at stake. A challenger for the IWGP United States Championship is also determined in a grudge match third from the top of the card.

KENTA vs. Hiroshi Tanahashi For the IWGP United States Right To Challenge Contract

The briefcase of KENTA holds the right to challenge contract, and it also has a crack belonging to Hiroshi Tanahashi. KENTA hit “The Ace” in the head with the briefcase, leaving a crack in the case. During a recent show on the Road To Power Struggle, KENTA caved in the briefcase on the head of Tanahashi.

After the first crack in the briefcase, KENTA seemed proud of the blemish. He denoted it by writing Tanahashi’s name with an arrow pointing to the crack. On the final night of the Road To Power Struggle series in Korakuen Hall, KENTA smashed the case on the skull of “The Ace”.  The irreparable damage left the briefcase in shambles. KENTA left Korakuen Hall angry that his briefcase is damaged beyond repair.

KENTA has been relentless in his assaults on “The Ace”, but Tanahashi is a tremendous babyface protagonist. The target of KENTA’s attacks, Tanahashi is due a comeuppance. Tanahashi can not only gain a measure of revenge, he can also gain a title shot in the process. Revenge is a constant theme on the card, and that is most apparent in a special challenge grudge match involving “The Rainmaker.” 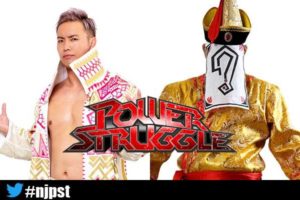 The recently debuted Great-O-Khan entered NJPW to form a new stable alongside Will Ospreay and Bea Priestley. Together they are known as The Empire, and their sights are set on Kazuchika Okada. The new heel faction has been on a recent mission to ruin Okada.

Great-O-Khan is not exactly striking fear in the hearts of fans, but his opponent for his first singles match in NJPW is more than capable of delivering a good match. Though some critics have doubted the talent of O-Khan, he is at least in the ring at Power Struggle against one of the best workers in the world.

O-Khan at Power Struggle has the chance leave a lasting impression. Whether good or bad remains to be seen. What could be a sleeper match on the show is a title match on the undercard. 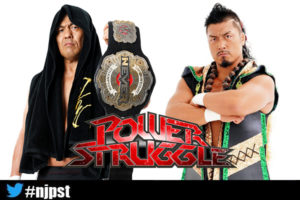 Minoru Suzuki defends his NEVER Openweight Championship against Shingo Takagi in a return bout at Power Struggle. If given time, this could be the most entertaining match on the show. These two have torn houses down in recent months against various opponents.

Suzuki defeated Takagi in July to win the NEVER title at Summer Struggle In Jingu. Takagi avenged the loss by beating Suzuki in October during G1, but that was in a non-title match. Takagi must win the rubber match to regain the title.

The King of Pro Wrestling provisional trophy is at stake when defending KOPW title holder Tory Yano faces Zack Sabre Jr. The match at Power Struggle includes an added stipulation of no corner pads covering the turnbuckles. Yano typically will remove the pads. No the pad are removed for him before the bell rings.

KOPW title bouts are varying odd stipulation matches, which is unique in a promotion that rarely ever does gimmick matches. Purists might decry the various stipulations, but others might feel it is all in good fun. Yano for sure likes to have fun. ZSJ seems to have fun stretching people. Who will have the most fun on Saturday?