Where To Watch: B/R Live in the U.S., or pay-per-view (check local listings).
Available in the U.K. via FITE TV.

All Elite Wrestling presents Full Gear this Saturday from their home arena in Jacksonville. On paper, the card has arguably the best overall lineup of any prior AEW pay-per-view. Even without an arena full of fans, can Full Gear deliver on being one of their best shows to date? 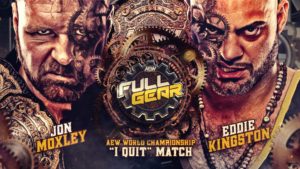 At first glance the most unlikely wrestler to main event a PPV this year is Eddie Kingston. Unless you are familiar with Kingston, then it may make complete sense. A real life example of the cream rising to the top, no matter how long it takes. Nevertheless, the timing is almost perfect as it fits with the story itself.

Kingston challenges AEW World Champion Jon Moxley in a title match with an “I Quit” stipulation. This is actually a return bout from a previous title match where Moxley won clean. Despite the loss, Kingston remains a strong contender just because he is such a dynamic character. His promos are also often the highlight of Dynamite.

Moxley also has history with Kingston, which plays into their match on Saturday. The story is they came up together. Moxley went on to have great success, and Kingston has struggled to break through. Kingston has a chip on his shoulder, and he uses that to motivate himself. That could also be his undoing in this match. Pride comes before the fall, or maybe before saying “I quit” in this case.

No matter the outcome, Kingston already proved his greatness in the build-up. Kingston now finds himself in the highest profile match of his career. This is Kingston’s moment to shine whether he wins or losses. He has perseverance, and that is partially why the audience loves about him so much.

Kingston challenges for the title in one of many anticipated matches on the card. Kingston’s journey to a world title match was years in the making, and the tag team title match at Full Gear also took years to become a reality. 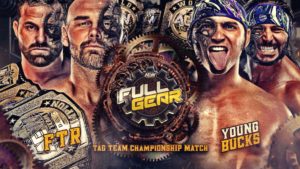 Cash Wheeler & Dax Harwood defend their AEW titles against challengers Nick & Matt Jackson. Besides being a tag title match, an added stipulation is if The Young Bucks lose, they will never again challenge for the titles. The plot thickened in a dream match that took years to come together. The team formerly named “The Revival” even took their newer “FTR” name as a play on something popularized by The Bucks.

Their feud began before AEW even existed, yet they have not meet in the same ring until AEW. Cash & Dax before then were billed under other names while wrestling around the world in WWE. Meanwhile, Nick & Matt were globetrotting as true independent contractors. Now they are finally in the same promotion. A feud that began on social media can now transfer to two teams actually being in the ring against each other.

With both teams recently displaying heel behavior, the protagonists in the story are not quite clear. The Jackson brothers are flirting with a darker side, and FTR themselves are certainly antagonists. Add in injuries, and the psychology in the match should have a twist, despite the recent announcement that Tully Blanchard will be banned from ringside during the bout.

If the stakes weren’t high enough already, The Bucks are also putting all future tag title shots on the line, which adds another interesting twist. Cody Rhodes lost under a similar stipulation, and he has stayed out of the AEW World title picture. Then along came the TNT Championship.

A previous match against Cody helped elevate Darby to the top of the cards, but can Darby now become a champion in AEW?

Rhodes not only recently regained the use of his family’s name, but he also recaptured the TNT Championship several weeks ago. A title change now seems too soon just mere weeks into Cody ‘s reign, but a win could make Darby an even bigger star.

Darby can still get over by losing, albeit only with the right finish. He could get an even greater push with a title victory.

The TNT Championship is on the line this Saturday at Full Gear and your champion @CodyRhodes is all confident that he will leave @DailysPlace #AndStill.

The former tag team champions now face off to determine who gets a title shot for the AEW World Championship. They have not only drifted apart as teammates, the two characters are seemingly headed in opposite directions.

Omega is reinventing himself by rebooting his “Cleaner” persona. He has renewed confidence and enhanced swagger. Page on the other hand is falling deeper into pattern of self-loathing, and his character is possibly self-medicating with booze. The anxious millennial cowboy is turning into an old school country song.

The two were once an odd couple tag team, but now they are more different than ever. Page in storyline never intended to enter the tournament, but Omega entered on his own. Page then almost reluctantly decided to enter. Both made it past the field, with Page maybe having a harder fought run to the finals than Omega.

The cocky attitude of Omega is ripe for an upset, but Omega still seems on the rise in AEW as a singles competitor. The Hangman character seems at a crossroads of sorts, and the outcome might decide his new direction.

The tournament final will decide the next title challenger. While some look to gain their first AEW singles title, others on the card have their sights on regaining a belt. 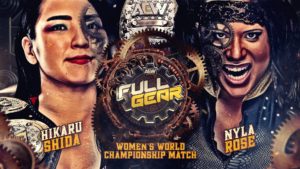 Nyla Rose challenges AEW Women’s Champion Hikaru Shida in another title match on the Full Gear card. Rose looks to regain the title she once lost to Shida, and the champion fights to continue her reign.

This is not their first meeting, as they had a title match earlier this year at Double Or Nothing. Shida defeated Rose to win the title, so Rose is out to avenge that loss. Their first match was good, and they meet again in a title match on PPV.

The tables have turned for the return bout. Shida goes in as the defending champion this time around, and Rose is the challenger role. Also at the proverbial table for this round is Vickie Guerrero, who is in Rose’s corner. Guerrero could certainly play a role in the match.

MJF and Chris Jericho have met for dinner, a dance routine, and a debate in attempts to decide if MJF should join The Inner Circle. On Saturday at Full Gear they meet in a match to make the determination. If MJF wins the bout, then he joins Inner Circle.

Two of AEW’s most arrogant personas square off. Although they are adversaries, MJF and Jericho admire each other. The admiration and the disdain are not independent of each other. Jericho and MJF are both admirers and opponents at the same time.

Possibly factoring into the match is Wardlow, who in storyline is under contract to MJF. Wardlow provides plenty of muscle in MJF’s corner. Likewise, the members of Inner Circle could also factor into the match. One person in Inner Circle does not seem too thrilled with the faction courting MJF. That person is Sammy Guevara, but he is likely too busy as part of a special attraction.

Matt Hardy was making cinematic matches long before that became a trend during the pandemic. Hardy years ago became one of the hottest acts in pro wrestling, and his cinematic epics played a large role in his reinvention. His feud against Guevara almost played a role in Hardy’s demise.

Brawling between Hardy and Guevara has led to some scary moments. They have outright hurt each other on several occasions. Hardy seems to have received the worst end of things. At some points the worst parts have stopped being entertaining, and the scene turned concerning.

Some concerns are alleviated with the match being pre-taped in a cinematic fashion. Hardy was highly entertaining in the past doing such things, and he rarely required lots of stitches while doing so.

Originally slated for the pre-show, Orange Cassidy against John Silver was moved up to the PPV card. Silver recently got over as part of the cast on Being The Elite. AEW expands on that newfound popularity with a match on PPV.

Cassidy himself is wildly popular in AEW, even with his ho-hum attitude. Not in spite of it, Cassidy is over because of his whatever mindset. Cassidy is subdued. Silver on the other hand is getting over in part because of his over-the-top reactions.

Dark Order is the proverbial elephant in the room during the match. How does the cult faction factor into the match?

Serena Deebs defends her newly won NWA title against challenger Allysin Kay. The title bout is set for the Buy In, which is a pre-show hyping last minute PPV buys. The relationship between AEW and the NWA continues.

Kay makes her debut in the promotion, and in a title match no less. She challenges for a title she previously held. Kay also recently left the NWA to become a free agent, yet she challenges for one of their championships. The irony and backstory make for intrigue ahead of the showdown on Saturday.

The rivalries will soon kick into Full Gear this Saturday night.