The WBC has created a brand new weight class to a sport that already has too many weight classes.

Tired of the weight difference between lighter heavyweights and bigger guys in boxing’s biggest weight class, the WBC created a new division above cruiserweight: bridgerweight.

The purpose of the division, at least in the WBC’s eyes, is to limit the advantage bigger heavyweights have on smaller heavyweights. The WBC looked at the growing size of heavyweights over the years and thought it would be urgent “to reduce the difference in weight between divisions which demanded great physical sacrifices with dangerous practices of dehydration, or the fact that going up to the next division meant giving away a lot of advantage having to face much heavier and stronger boxers.”

The bridgerweight got its name from 6-year-old Bridger Walker, who saved his 4-year-old sister from an attack by a wild dog. While it is a nice gesture naming a weight class after a child who made a heroic deed, it still shouldn’t distract everyone from the main point.

Straight up, this is a bad idea. Not only does it needlessly create a weight class in a sport filled with too many of them, it also means the addition of yet another “world” title. Making up a new weight class isn’t going to necessarily solve this supposed issue of the size discrepancy. Not to mention that the WBC just had a heavyweight champion in Deontay Wilder who held the title for five years. He spent most of his title reign in that 200-224 pound range facing guys weighing in the 250s.

We also just had a Matchroom Boxing heavyweight main event in which Oleksandr Usyk beat Derek Chisora, who was nearly 40 pounds heavier than him.

Of course, these examples aren’t the norm when it comes to small heavyweights vs. big heavyweights. But the fact remains that the issue isn’t as rampant as the WBC makes it out to be.

The WBC said it will contact boxers this month who compete in cruiserweight and heavyweight to confirm which category they wish to be included in. That creates another issue: who would want to fight in this weight class? Current cruiserweight contenders aren’t likely jumping on board. As far as the heavyweights go, you can count the number of top heavyweights that would qualify for bridgerweight on one hand.

So how do you go about making bridgerweight a legitimate weight class? It’s a tall order and it’s one that few have faith in the WBC doing well in completing.

How’s about this author take a crack at it.

In order to create buzz for a new division, simply putting two random fighters in a title fight isn’t exactly going to cut it. Sure, there will be people paying attention to it. However, the focus will be on how these fighters didn’t deserve a “world” title fight. It’s best to create something that will keep the attention on the new weight class and the multiple fighters that will be a part of it.

How do you do such a thing? With a tournament, of course. In fact, the format is already there for such a tournament to give attention to an overlooked weight class: the World Boxing Super Series.

Despite the many logistical issues the first two seasons brought, there’s no denying the good that the WBSS has done for the sport. The first cruiserweight tournament created a lot of buzz for the division in the west. In addition, cruiserweights such as Usyk, Murat Gassive and Yuniel Dorticos became bigger stars because of it. The same could be said for the junior welterweight, bantamweight and super middleweight WBSS tournaments.

A tournament pitting eight quality cruiserweight and lighter heavyweights to crown the inaugural WBC bridgerweight tournament would at least lessen the backlash that comes with a dumb idea like this.

It should be noted that this fantasy booking would only work if these fighters come on board. What are the chances of this idea actually going through? About 0.000001 percent.

This is all just a hypothetical scenario and if boxing’s going to add yet another division, might as well have fun with it.

Without further ado, here are the eight fighters competing in my fantasy bridgerweight tournament:

As for the bracket, it would look like this, ensuring that familiar faces don’t face each other from the start and fresh matchups are created. 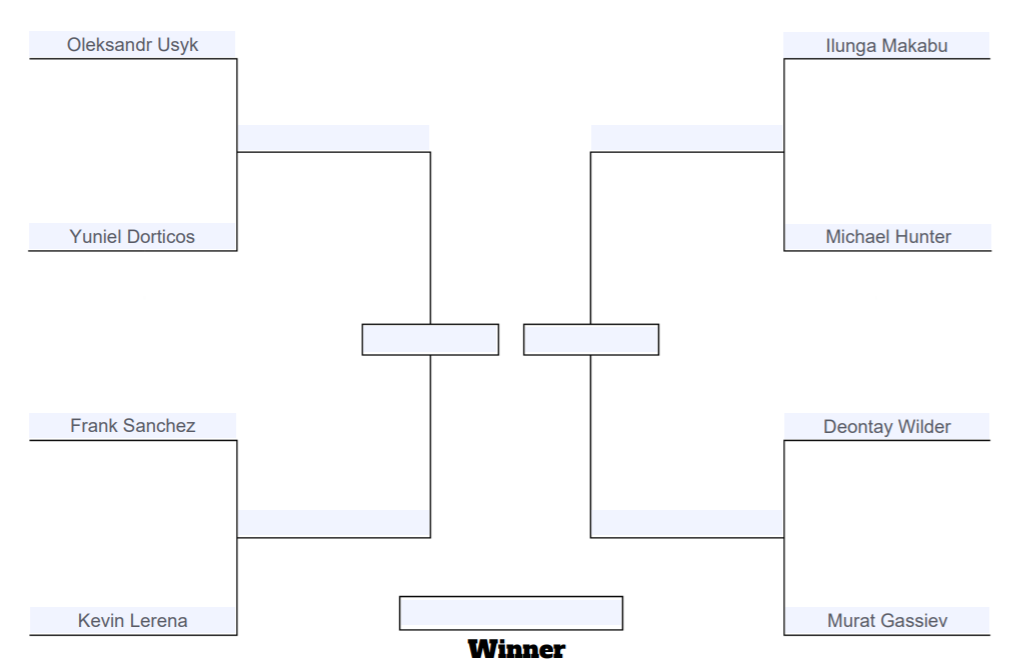 Who would win this fantasy bridgerweight tournament?