On Thursday’s edition of the AEW Unrestricted Podcast, All Elite Wrestling Executive Vice-President, the newly renamed Cody Rhodes stopped in for a frank, at times almost too frank, discussion with AEW referee Aubrey Edwards and announcer Tony Schiavone.

Cody starts the show joking about how QT Marshall went from being his assistant to a force in the company, and now he needs a new assistant. Cody mentions possibly hiring Veda Scott but remarks that she’s “just like QT.”

When talk of TV ratings comes up, Cody says he does not let their early successes get to his head. The company has not expanded in the way he had hoped by this point. He does acknowledge that the pandemic has hamstrung them but is proud of how the ratings have rebounded. He points to his brother Dustin’s match with Brodie Lee as a high point.

The first awkward moment in the podcast comes when Cody opens up about the errant chair shot from Shawn Spears at last summer’s Fyter Fest. Cody says that his generation shouldn’t have to carry Attitude Era stars’ baggage when it comes to headshots, mentioning Mick Foley, The Rock, and Ken Shamrock specifically. Cody’s idea was to bring back headshots but do it safely. He worked with their props department to develop a “gimmicked” chair that was more like a cookie sheet. Cody states his mistake, and he takes full blame, was telling Spears to “swing for the fences.” Spears’ side swing caused the chair’s lip, something they had not accounted for, to split the back of Cody’s head. At the moment, Cody thought it came off well, but when he got backstage, he saw both AEW President Tony Kahn and current AEW World Champion Jon Moxley tearing into Spears, calling him unsafe. Cody realizes the idea itself was poorly thought out, and the mere optics of chairs to the head, safe or not, was enough to convince them not to use it again. Cody admits he was wrong and feels terrible for Spears getting the brunt end of the incident. He does joke that he still does have one more gimmicked chair left. 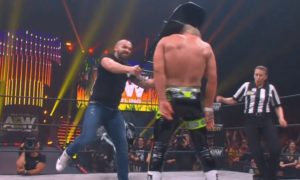 The portion of the podcast that seems to have drawn the most discussion happens when Cody reveals the nature of AEW’s pay structure. As first pointed out by @Luchablog when declaring talents like Ricky Starks, Eddie Kingston, and Anna Jay were “going to be a huge part of year two.” Cody then asks, “Red Velvet; I don’t even know if Red Velvet works here yet?”

This leads to a discussion on the tiered AEW system. Tier 0 performers work on a per night deal, and AEW has the right of refusal to work indy shows, which has come under fire as the Covid-19 pandemic continues to worsen. “We don’t want that Covid shit,” Edwards says. Tier 1 workers are full-time employees receiving “salary” from the company. They mention tiers 2-4 and finally a “Tier Jericho,” which infers their top-level and highest-paid employees/contractors. They don’t discuss which workers are under which deals. The system was designed by Chris Harrington, former Wrestlenomics contributor and current AEW Vice President.

The interview transitions into Cody discussing wrestler positioning in the company and how he believes top stars should be front in center, referring to posters and game covers specifically. Cody lets some of his professional frustration slip when he mentions Moxley’s position in front of him, which seems to jibe with other comments made recently. Whether this is real or merely Cody laying seeds for a possible program down the road is unclear.

The podcast wraps up when Cody discusses this being his final five years in wrestling. He wants to do more acting, and Tony Kahn has hired an acting coach to help work with Cody in efforts to grow the brand. For the second time in as many days, Cody expresses interest in running for Senate in Georgia. Whether he plans to run in six years or under which political party is never broached.