While most amateur wrestling competitors were focused on the USA Wrestling Junior and U23 National Championships in Omaha, FloWrestling hosted a special card in its corporate home of Austin, Texas. It was headlined by an exhibition match between Junior World Silver Medalist and two-time NCAA Champion, Arizona State’s Zahid Valencia, and four-time World Champion and Olympic Gold Medalist, Jordan Burroughs.

Competing at a catchweight of 185 lbs, Valencia (who wrestles at 189 lbs./87 kg.), the Arizona State senior, and Burroughs (163 lbs./74 kg.) met this weekend in a highly anticipated match. The 32-year-old Burroughs weighed in at 178 lbs., giving up four inches to the 23-year old Valencia, who made the catchweight. 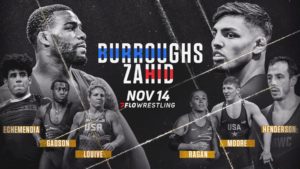 The undersized Burroughs found himself down early after Valencia hit a slick duck under less than a minute into the match. Valencia scored another takedown, taking a 4-0 lead into the break. In the second period, Valencia, competing in his first match since finishing a nine-month suspension for failing a drug test, started to slow down. Burroughs scored a two-point takedown off of a reshot go around, then drove Valencia off the mat for one point, closing the gap 4–3. Burroughs found his proverbial second gear, scoring two more takedown and two more step-outs to win the match 8–5.

Burroughs, whose come-from-behind wins have become a hallmark of his style, looks forward to another upcoming match with David Taylor. Since winning the 2011 World Team Trials, Burroughs has a record of 192–9 with 71 superior decisions and 8 falls. In that time, he’s outscored his opponents 1437-331 and 41-2 against World Medalists in those nine years. His astonishing career will continue forward as the push towards the Tokyo Olympics gets underway.

In Omaha, 60 National Champions in Greco-Roman and Men’s & Women’s Freestyle were declared in the U23 and Junior divisions. In the U23 Division, Taylor Lujan (Panther Wrestling RTC) won the championship at 86 kg and was named Outstanding Wrestler in Freestyle, while Keegan O’Toole (Tiger Style RTC) won the Junior division at 70 kg and was named the OW. Macey Kilty and Emily Shilson each won National Championships in both the Junior and U23 Divisions. At 55 kg Conor Knopick (Monarch Wrestling Club) was named the OW after his junior championship win. Taylor LaMont (Sunkist Kids) secured another National Champion and the OW at the U23-level after defeating defending champion Randon Miranda (New York Athletic Club) at 60kg.