Joe Rau is twenty-nine years old. Before the COVID-19 pandemic spread across the world, he was on the cusp of making his fourth World/Olympic team in Greco-Roman Wrestling.

Eleven years ago, Joe Rau was a senior at Chicago St. Patrick High School. Here, he qualified for the Illinois High School state championship tournament but did not place.

In the summers, Rau had become a fixture on the Illinois Greco-Roman national teams. Heading into his freshmen year of college, he had never placed in either the Cadet or Junior National Championships (the tournaments are known in amateur wrestling circles as “Fargo,” ad will be referred to as such). Joe Rau took his first step toward greatness when he won the Fargo Greco-Roman Championship at 215 lbs. in what many, at the time, called a major upset. Rau followed up his Greco performance by attaining All-American status in Freestyle, placing seventh in that tournament; a remarkable summer presentation from an athlete that most college coaches looked passed, but far from what Joe Rau considered greatness.

I feel like I have to do something great, just to justify my life.

Steve Marinetti, former NCAA Division I National Champion for the University of Illinois and 1995 World Team member, saw promise in the eighteen-year-old and brought Rau under his tutelage at Division III Elmhurst College in suburban Chicago. At Elmhurst, Rau was a three-time Division III All-American, placing 3rd, 2nd, and 1st at 184 lbs. Rau’s infectious spirit and joyful attitude helped lead the Elmhurst Blue Jays to their first NCAA Team Championship in 2013.

“What made a difference for me was Steve (Marinetti), letting me wrestle Greco in the summer. That’s what I always wanted to do. I love wrestling, but Greco is what I’m best at.” 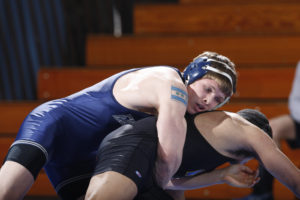 After finishing his senior season, most Division III athletes prepare for life after sports. In his quest to find greatness, Joe Rau chased his dream of winning a World Championship and put his sights on the US National Championships. Called the US Open, Rau placed fourth, a respectable finish for a college-aged athlete with no sponsorships or club affiliation.

“Back then, I didn’t have a club helping me out. I had nobody to really train with. I just showed up and competed. Nobody really knew who I was until the US Open. After that, I got some attention.”

After the performance, Rau signed with the famed-Minnesota Storm Greco program and trained under legendary coach Dan Chandler. Rau jumped at the opportunity that included a small stipend.

“I lived with three other guys in a house in this terrible neighborhood in St. Paul. I slept on the couch for over a year…it’s funny ‘cause when you don’t have anything, you fight so much harder. Your performance depends on how you compete in these tournaments.”

After a year of training in the Storm program, Rau saw marked improvements, winning both the Northern Plains and US University National titles and placing 10th at the University World Championships. However, inside the Fargodome, the site where Joe Rau made his first statement, he met the greatest challenge of his career.

As part of a special event held in conjunction with the Fargo Nationals, Joe Rau took on 2012 Olympian Ben Provisor in a best of three matches to determine the 2014 World Team member. With the Illinois contingent cheering the man their coaches held up as a paragon of hard work and dedication, Rau secured his first World Team spot at 80 kilograms (176 lbs.).

“Joining (Minnesota) Storm was everything. It’s funny, here I am making World Teams when I’m not every scoring a point in my wrestling room. Jordan Holm beat the crap of me for three years before I ever scored a point on him in practice,” Rau laughed.

In five years, Joe Rau went from above-average high school wrestler to world team member. However, his quest to achieve greatness would stop after a first-round loss.

“Greco is just different.” In Greco-Roman, leg attacks are forbidden. All wrestling must be done with the upper body. “We’re out there trying to compete with guys who’ve been wrestling this style their whole lives. We have to wrestle folkstyle (NCAA collegiate style) most of our 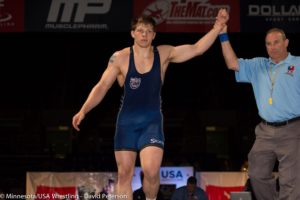 lives, and then we have to try and catch up to what they’re doing. Some of these countries don’t even wrestle Freestyle. They just wrestle Greco.”

2015 proved to be a difficult year. Even after winning his first Pan-American Championship, Rau failed to make the 2015 World Team.

In 2016, an Olympic year, Rau decided to make big changes. He jumped from 80 kilos to 98 kilos (215 lbs.), a difference of nearly forty pounds. Rau’s gamble paid off when he made the Olympic Trails finals against the US Army’s Caylor Williams in another best of three-match series. Williams opened up in the first match, executing a remarkable throw and pinning Rau in their first match. The series was knotted after Rau won the second 5–2, setting the stage for the final match that Rau won 6-5. Joe Rau had secured a spot on the 2016 Olympic team.

… it’s funny ‘cause when you don’t have anything, you fight so much harder. 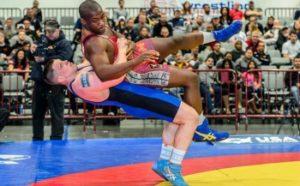 However, International Olympic Committee (IOC) rules require every member country to “qualify” each weight class for the games. Meaning that Rau would have to place in another qualifying event to actually wrestle in the Olympics. Joe Rau had two chances to qualify the 98-kilo position for the Olympics but fell short. Joe Rau won the Olympic Trials but wasn’t technically an Olympian.

In 2017–18, Rau bounced between weight classes, where he stayed a contender but didn’t reach the World Championship stage.

“In some ways, I have respect for these guys that stay around chasing that never make a team. In some ways, it’s almost easier to be those guys because they’re always chasing. I have respect for that because you’re like, ‘Hey, man, I keep getting hurt, or I can’t pay my bills, and I don’t know how much longer I can chase this.’ If you don’t make that National team, you pretty much get nothing. It’s pretty hard financially unless you have rich parents,” Rau laughs.

“There’s some ways that I’m different now. Both good ways and bad ways. You get used to being treated well. You start expecting things. When I started this, I didn’t expect anything. Then you make a couple teams and you start complaining about things. ‘Where’s the taxi?’ ‘Why haven’t we gotten a raise?’ There’s ways I need to check myself. You start taking things for granted. I think it’s good to fight for better treatment…but there’s also a part that’s always complaining. That’s not good.”

In 2019, Rau became more of a mentor and less of the cheery kid that found success. Rau, down at 87 kilos, secured a spot on his third World team, defeating his rival Provisor in two straight matches. At the 2019 World Championships, Rau won his first match but lost in the round of 16.

In 2020, Joe Rau was the favorite to secure a position in the 2020 Olympics. Having won the Pan-Am Games, Rau already qualified his weight before the Covid pandemic shelved the Tokyo games to 2021. The US later declined to send a team to the 2020 World Championships in Serbia.

Reflecting on the year, “At first, I liked having the break ‘cause I had a lot of nagging injuries. But I was wrestling great. I think I would have won or medaled if we would have wrestled right away. Now I have more time (to heal), but I have less access to the things that make me great.” 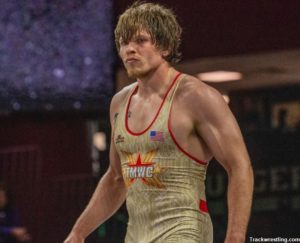 Today, while a member of the Titan/Mercury Wrestling Club, Rau trains in Champaign at the Illinois RTC (Regional Training Center) with head coach Bryan Medlin. Medlin guided him to his Fargo National title in 2009. However, training on a college campus is difficult right now with COVID-19 restrictions.

“I don’t feel good right now. It’s really easy to be negative right now. Some days it’s easy to feel sorry for yourself. I am (after an upset loss at the US Open finals). I’m not happy with not getting a chance to wrestle anytime soon. I’m a pretty emotional guy. It’s what makes me good, and it’s what holds me back. But I always use this for more motivation to get better. I hate losing. You gotta stay in the fight. It’s hard to live by that, but I try.”

Rau isn’t sure if he can wrestle another four-year cycle. Some days he’s confident being the best US wrestler in his weight class. Other days it’s more complicated.

“I need to lock into a disciplined lifestyle. I’m not the guy I used to be. I’m married. The guy I am now, some days I feel like he doesn’t need this anymore, but that’s not why I’m still going. I owe it to the kid that used to dream about this. I owe it to the guy who was starving on the couch. That’s who I’m wrestling for now.”