One of the most unique episodes of NXT featured the revival of Halloween Havoc. WWE’s black-and-gold brand produced a very entertaining show with a Halloween theme.

Not only was the show good from a creative standpoint, but NXT drew a larger number of overall viewers than AEW. A strong and focused build helped draw the audience, and the spectacle of the Halloween episode then hooked fans. 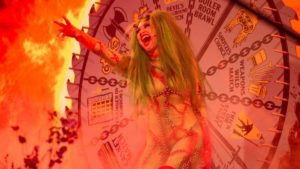 Viewers were treated to exciting matches, and some characters had tricks along the way. The show included a surprise return to NXT, as well as a separate mysterious figure running in twice to interfere in matches. Also on the show was a mini-horror movie that involved zombies.

The premise was like a demented take on Wheel of Fortune. Shotzi Blackheart hosted the show, and she spun the giant saw-blade that represented “Spin the Wheel, Make the Deal,” which determined the stipulations for the two titles matches on the show.

Fortunes increased for some characters. Johnny Gargano won the NXT North American Championship after defeating Damian Priest in the match opener. Falls counted anywhere in this bout, which was called a “Devil’s Playground Match.”

Gargano and Priest brawled around the Capitol Wrestling Center, which gave viewers a tour of the Halloween-themed set from the start. Someone in a Scream costume interfered to attack Priest, and Gargano shattered a tombstone hitting Priest with it. Gargano then covered Priest on the arena floor to win via pinfall.

The championship opener set the stage for the craziness that followed later in the show. A spin of the wheel also determined the stipulation for the other title bout, which was essentially a ladder match. 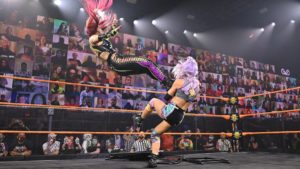 Io Shirai climbed a ladder to retrieve her NXT Women’s Championship, thwarting challenger Candace LeRae. Shirai retained her title in an outstanding match that saw them take some crazy bumps.

The person dressed in the Scream costume also interfered in the championship ladder match, but Blackheart made a save to offset the interference. The women’s title bout closed the show, and in between were more matches that played on the Halloween theme.

The set inside the CWC perfectly reflected the theme of Halloween. Makeshift graveyards and macabre elements gave the show a distinct vibe unlike any other episode in the history of NXT.

Earlier this year another themed show played on patriotism with The Great American Bash. More impressive than the GAB set was the aesthetic of Halloween Havoc. With GAB, the set was more of a backdrop, but the Halloween set was almost itself a character on the show.

The Halloween setting played a role in the matches more so than the set used for the GAB episode. On the Halloween Havoc episode, another set outside of CWC even hosted a mini-horror movie. There were even zombies.

Cameron Grimes and Dexter Lumis starred in a cinematic match that played on horror and suspense. Grimes met Lumis in a “Haunted House of Terror,” which involved a haunted house as the name implies. 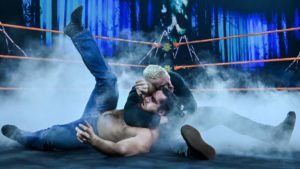 Lumis and a horde of zombies stalked and frightened Grimes. He fled in fear, running back to the CWC. Haunting Grimes when he arrived back in the CWC were more zombies, and Lumis suddenly appeared to further haunt Grimes. Lumis went on to choke out Grimes, seemingly making him the winner.

Though Lumis clearly choked out, the conclusion of Haunted House of Terror was more like the end of movie than the finish of a match. A graphic that read “The End” even splashed across the screen to indicate the cinematic match was over.

Haunted House of Terror was campy and corny, and it is likely polarizing among viewers as to whether it was good or not. Although not as good as the Boneyard Match at WrestleMania, Haunted House of Terror was arguably better than the Firefly Funhouse Match from WrestleMania. Even with zombies and such, in some ways it was somewhat less ridiculous than other cinematic matches like Money in the Bank.

One surprise on the special episode of NXT was the return of Pete Dunne. He returned in angle involving Pat McAfee and the NXT Tag Team Champions. McAfee a week earlier aligned with Danny Burch & Oney Lorcan, helping lead them to winning the tag titles.

McAfee was flanked by Burch & Lorcan for a terrific in-ring promo. Such a natural, McAfee cut a great promo that brought out Kyle O’Reilly to confront him on behalf of Undisputed Era.

Dunne came out to seemingly have O’Reilly’s back, but Dunne instead turned on O’Reilly. After smacking him with a chair, the new heel faction teamed up for a beatdown on O’Reilly. The plot thickens around the emergence of McAfee becoming a WWE superstar. 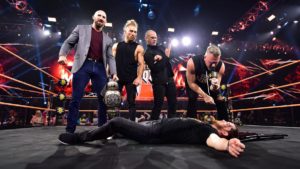 Rounding out the card on the Halloween Havoc episode were singles matches without stipulations. One of those bouts had Rhea Ripley against Raquel Gonzalez in a grudge match. That included one of the few clearly clean finishes on the show. No run-ins or interference.

Ripley pinned Gonzalez in a good match that was in some ways a Monster Mash or sorts. Both are imposing characters, and their feud built for weeks leading up to the match.

Gonzalez looked strong, but she lost clean, ultimately. The decisive win for Ripley returns her character to the role of a proverbial killer. She defeated a strong heel, and Ripley looked more like a star than she has since the lead-up to WrestleMania.

Ripley was a breakout star before dropping her NXT title to Charlotte Flair earlier this year. The loss seemed to take some steam away from Ripley, cooling off her character for awhile. Now Ripley is back to being a real badass, and a win over Gonzalez helped in that portrayal. 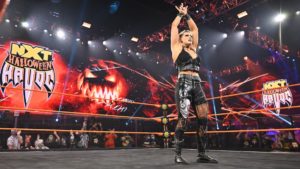 In another bout on the show, NXT Cruiserweight Champion Santos Escobar defeated Jake Atlas in a non-title match. It was arguably the weakest match on the show, although it was far from bad. The bout was simply rushed, as it was too short on time.

Although Escobar won the match via pinfall, the win was not clean. El Legado Del Fantasma interfered to cost Atlas the match. So maybe they will have a return bout. Hopefully they get more time, as their match was just beginning to get really good when it came to an end.

Overall the Halloween Havoc edition of NXT was an enjoyable departure from a typical episode. The matches fit the setting, and NXT used the Halloween theme to deliver a very unique show.

Full results (in order of appearance):

Next Week On NXT: