Hello, fight fans, and welcome to this week’s edition of the Monday MMA Round-Up, where we look back at the week that was and look forward to the week that is in the world of mixed martial arts. I hear something major happened over the weekend, so let’s dive right into things with my thoughts on the week.

Here are some fights I would make for some of the fighters who competed at UFC 254 on Saturday:

Here are some notable fight announcements from the past week: 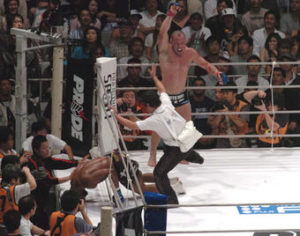 On Halloween night, October 31, in the year 2004, one of the more memorable PRIDE FC events was held, with PRIDE FC 28: High Octane at the Saitama Super Arena in Japan. It was where the heated rivalry between Wanderlei Silva and Quinton “Rampage” Jackson had its second chapter. In that fight, Silva knocked Jackson out with some vicious knees, leaving the lasting visual of an unconscious and bleeding Jackson lying on top of the bottom rope as Silva was celebrating his win. It is also regarded as one of the best fights in PRIDE FC history.

Also on the show, Mirko Cro Cop defeated Josh Barnett, Dan Henderson defeated Kazuhiro Nakamura, and Mark Hunt defeated Dan Bobish. The show drew 24,028 fans to the Saitama Super Arena, and the fight between Silva and Jackson was named the Fight Of The Year for 2004 in the Wrestling Observer Newsletter Awards.